The libs and state media are up in arms over Rick Perry’s “almost treason” comment the other day.  They claim that Perry was threatening Bernake.  In his speech, Perry was about to say, “treachery,” but in mid-word changed it to “almost treasonous.”

To those who’ve never traveled outside the BosWash corridor,  that “almost treasonous” term is common usage. It portrays the feeling that Washington is out-of-touch and is actively working against the welfare of most of the country.  Some, including myself, would have preferred Perry continued and used “treachery.”  It was more appropriate to the conditions we see in Washington—a betrayal of trust.

It got the libs so upset they are soliciting prostitutes, “exotic” dancers, and gays to claim Perry visited strip joints, spent time with prostitutes and was gay. This ad appeared in a sleazy little “alternative” paper in Austin, TX.  Ads for “personal services” and solicitiation of prostitution are its normal fare.

We really shouldn’t be surprised something like this has appeared. It a common lib/dem tactic.

It’s a sad sign of the politicization of NASA.  The Obama administration ordered NASA to verify that human caused global warming was true.  Instead, NASA discovered that the original data used to justify the myth had been falsified.

That could not happen.  So the overseers of NASA came up with this idea.

UNIVERSITY PARK, Penn. –  We’ve all heard of the ravaged rain forests and the plight of the polar bear. But as far as reasons for saving the planet go, the one offered by scientists Thursday is truly out of this world.
A team of American researchers have produced a range of scenarios in which aliens could attack the earth, and curiously, one revolves around climate change.
They speculate that extraterrestrial environmentalists could be so appalled by our planet-polluting ways that they view us as a threat to the intergalactic ecosystem and decide to destroy us.
The thought-provoking scenario is one of many envisaged in a joint study by Penn State and the NASA Planetary Science Division, entitled “Would Contact with Extraterrestrials Benefit or Harm Humanity? A Scenario Analysis.”
It divides projected close encounters into “neutral,” those that cause mankind “unintentional harm” and, more worryingly, those in which aliens do us “intentional harm.”
Extraterrestrial intelligence (ETI) “could attack and kill us, enslave us, or potentially even eat us. ETI could attack us out of selfishness or out of a more altruistic desire to protect the galaxy from us. We might be a threat to the galaxy just as we are a threat to our home planet,” it warns.

When Obama stopped in rural Illinois for a meet ‘n greet, a farmer complained about the massive federal paperwork he had to produce.  Obama told him to call Washington.

A reporter did just that to see if anything could be done.  This is what happened.

At Wednesday’s town hall in Atkinson, Ill., a local farmer who said he grows corn and soybeans expressed his concerns to President Obama about “more rules and regulations” – including those concerning dust, noise and water runoff — that he heard would negatively affect his business.

The president, on day three of his Midwest bus tour, replied: “If you hear something is happening, but it hasn’t happened, don’t always believe what you hear.”

When the room broke into soft laughter, the president added, “No — and I’m serious about that.”
…

When this POLITICO reporter decided to take the president’s advice and call USDA for an answer to the Atkinson town hall attendee’s question, I found myself in a bureaucratic equivalent of hot potato — getting bounced from the feds to Illinois state agriculture officials to the state farm bureau.

Here’s a rundown of what happened when I started by calling USDA’s general hotline to inquire about information related to the effects of noise and dust pollution rules on Illinois farmers:

Wednesday, 2:40 p.m. ET: After calling the USDA’s main line, I am told to call the Illinois Department of Agriculture. Here, I am patched through to a man who is identified as being in charge of “support services.” I leave a message.

3:53 p.m.: The man calls me back and recommends in a voicemail message that I call the Illinois Farm Bureau — a non-governmental organization.

4:02 p.m.: A woman at the Illinois Farm Bureau connects me to someone in the organization’s government affairs department. That person tells me they “don’t quite know who to refer you to.”

4:06 p.m.: I call the Illinois Department of Agriculture again, letting the person I spoke with earlier know that calling the Illinois Farm Bureau had not been fruitful. He says “those are the kinds of groups that are kind of on top of this or kind of follow things like this. We deal with pesticide here in our bureau.”

“You only deal with pesticides?” I ask.

“We deal with other things … but we mainly deal with pesticides here,” he said, and gives me the phone number for the office of the department’s director, where he says there are “policy people” as well as the director’s staff.

4:10 p.m.: Someone at the director’s office transfers me to the agriculture products inspection department, where a woman says their branch deals with things like animal feed, seed and fertilizer.

“I’m going to transfer you to one of the guys at environmental programs.”

4:15 p.m.: I reach the answering machine at the environmental programs department, and leave a message.

4:57 p.m.: A man from the environmental programs department gets back to me: “I hate to be the regular state worker that’s always accused of passing the buck, but noise and dust regulation would be under our environmental protection agency, rather than the Agriculture Department,” he says, adding that he has forwarded my name and number to the agriculture adviser at IEPA. (The Illinois EPA.)

Well, you get the idea. It was a complete runaround.  It’s obvious that Obama has never had to deal with his own bureaucracy.  There is much more about the reporter’s efforts at the Politico Website.  Go there and read it all.
***

On a final note, here’s something to chuckle over during the weekend. 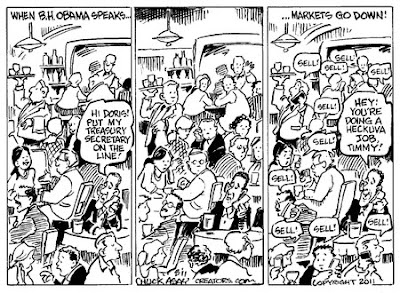