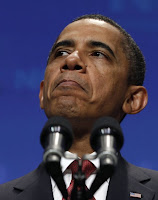 Has anyone really analyzed Obama’s behavior?  We have been able to observe quite a bit this last week and weekend.  There appears, if we are to believe various reports, several proposal made this last week in the debt limit talks.  Each one was torpedoed by Obama.

The pattern would be this.  After discussion a proposal would be made. Obama would agree. Everyone would shake hands and the meeting ends. Then later, Obama would have a presser or press release and change his agreement.  It’s as if, he’d make an agreement, then go off and make some calls, come back and break the agreement.
Someone else is making the decisions.  This scenario was repeated several times this last week.  Finally Boehner had enough and said that further discussions would be held without Obama.
Since before the election, contrary to the propaganda of the State Media, there were numerous questions concerning Obama’s competency.  His record of voting, “Present!”, in the Illinois legislature should have raised eyebrows.  The State Media ignored them. Obama’s political record was one of not making waves and skirting all opportunities to make a decision.
Then there was his educational records—all sealed. His so-called participation in the Harvard Law Review, couldn’t be verified either. It was all hearsay.  Even his books were ghost-written.
Why should we expect anything different once he was in the White House?  The answer of course is that it isn’t.
Supposedly, Harry Reid, took a proposal to Obama yesterday, Sunday, created by the Senate dems.  It included cuts but no new or higher taxes.  Obama nixed it.
Obama appears to be incapable of making a decision.  Anything he does must be approved by someone else.
The next question is who is pulling Obama’s strings?  Well, I’m not sure.  But one common subject keeps coming to the surface—unions.
One item that was under discussion in the talks was a ‘Pub requirement to limit union activity with Air Traffic Controllers.  It appears that the union wanted to allow a binding agreement with only a 50% vote.  Not a vote of all the employees affected. No, just 50% of the ones who voted.  What this meant that if an election to force Controllers into a union and an election was held, only half of the voters were needed to make a binding agreement. In other words of all the ATC employees across the country, if only four voted and two agreed to the union, ALL the Controllers would be unionized.
Obama’s bosses couldn’t have that blocked.
Look at the growth of unionism since Obama’s election.  The UAW took over GM and Chrysler by force of government enforcers.  Look at the activities of SEIU. Look at the spread of public service unions.  It would appear that the only group that is really doing well in this current economy is unions.

Now, I could be wrong.  But if you examine the evidence and Obama’s contradictions, some one is pulling his strings to the detriment of the country. Who is the Puppetmaster?

I think it’s the unions.

3 thoughts on “The Puppet”