I was lying in bed this morning, trying to decide if I was awake enough to get up, when a thought occurred to me. A number of items we buy every day, like gasoline, have the taxes rolled into the displayed price.  In other cases, taxes are lumped together into a single line item on you receipt. 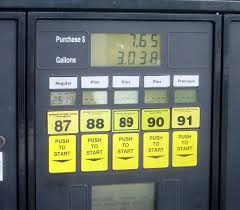 My thought was, “What if taxes were printed as individual line items on receipts?”  In Missouri, the state and federal taxes are posted  on the pump.  The Missouri state gas tax is $0.173 and federal tax is $0.184 per gallon. A total of $0.357 per gallon. Missouri ranks 44th in total gasoline taxes.  The “blue” democrat controlled states, such as California ($0.661/g), New York ($0.656/g), Hawaii ($0.642/g), Connecticut ($0.636/g), Illinois ($0.612/g) and Michigan ($0.561/g) are the top five in highest gas taxes.
There may be some additional sales taxes imposed as well.  If I recall correctly, the pumps locally say that the gas tax is $0.42 per gallon. Taxes are the single largest item in the end price of gas.
Too often, taxes are hidden.  While some taxes may be necessary, in most cases we pay taxes grudgingly because we’re forced to pay by the authority of the “governmental” gun.
The control of  taxes is awareness.  Being aware of the total taxes we pay will drive the public to control taxation—and spending.
What I propose is that each tax be line-itemized on all receipts. When you buy gas, the receipt documents all the taxes, local, county, state and federal, included in the final price of the gas.  When you buy an item at Wal-Mart or other retail outlet, the receipt will itemize each individual tax that is added to the price of the item.  I would propose a prohibition of merging various taxes into an “omnibus” tax whose sole purpose would be to hide individual taxes levied by various agencies.
There would be a small cost to make these changes, but almost all point-of-sale devices today are computerized.  It would take only a few man-hours to change the program to print the taxes.  After all, they already know the rates. They already collect the taxes.  Now, put some truth in the receipts and list each individual tax.
People have a right to know not only how much they are taxed, but also my whom they’re taxed.  Call a tax a “fee” is a mis-direction, a lie to put it frankly.  People have come to expect their government to lie.  It’s time to make some corrections and put some truth back into government—and in taxation.