I’m writing this on Wednesday.  According to reports the current CR, or Continuing Resolution, will expire on Friday.  If nothing is done, the government will shutdown.
Good!

Nothing dire will happen contrary to the protests from dem pols.  Locally, Sen. Claire Mcaskill (D-MO) claims the shutdown will mean “thousands and thousands” of Missourians won’t receive paychecks.  What she didn’t say was those Missourians are government workers.

If those workers are so critical, let’s wait and see just what happens.  I’ll bet there won’t be any noticeable difference.  It will be a good opportunity to see who is really needed and who isn’t.  Those are critical to the working of the government will be paid.  Those who aren’t, won’t.

Just so you’ll understand what a government shutdown means, here’s something to make it more understandable. 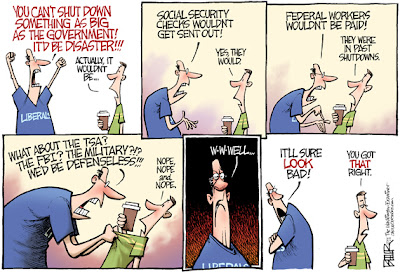 Update: Obama was asked what he was doing to help the senate reach an agreement. His reply was basically, “Not my problem,” as he prepared to leave DC for some fund-raising speeches in Philadelphia and New York.