I introduced this topic yesterday.  I didn’t know any details then but today some have been released.  The dem/lib idiots have started their expected, “People will DIE!!!!”, BS as usual.

Social Security was untouched. Medicare and Medicaid was.  The changes to Medicare was to eliminate it in its present form and provide direct subsidies to retirees to underwrite healthcare insurance premiums. Retirees can choose any insurance plan that fits their needs without having an unwanted socialist mandate crammed down their throats.  Medicaid would be changed to block-grants to each state.  The states would manage Medicaid in any manner they deem appropriate.

Tax rates would be reduced with a top level coming down to 25%.

The federal budget would be frozen at the 2008 spending level. It also includes reducing corporate welfare, Pell grants (which would negatively affect my daughter’s education towards a Nursing degree,) reduces the federal workforce by 10% and some farm and food-stamp subsidies.

The Republican budget proposal will eliminate the national debt while still preserving costly entitlement programs like Medicare and Social Security, Rep. Paul Ryan told CNBC.
Speaking just hours before the spending plan gets its formal introduction before Congress, Ryan, head of the House Budget Committee, said the debt will peak at 74.5 percent of gross domestic product in 2014 and then drop from there.

Will these reforms get passed?  Unfortunately, it’s unlikely.  Harry Reid still has control of the Senate and Obama has declared he’d veto it.  Regardless, it’s a very good start.  The next step is negotiations, the give and take.
My response to the give and take is to give as little as necessary and take everything the dems let slip through.  I end this post with this from Gary Varvel. 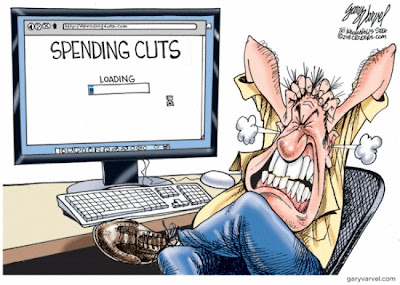 And just so you understand what the proposed cuts in the Continuing Resolution talks compare to the total budget, here is brief, clearly understood explanation from Michael Ramirez. 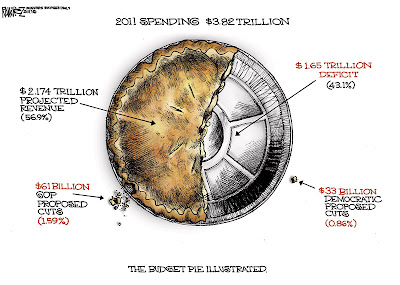