At least some ‘Pubs in Washington are serious about corralling and controlling our national debt. Senator Rand Paul (R-KY) has introduced legislation to balance the federal budget in five years.  How? Well, for starters, he’ll eliminate the Departments of Education, Energy, Commerce, and Housing and Urban Development.  I’d also add eliminating DHS, Transportation, the EPA, TSA, and FCC.

Senator Rand Paul, R-Ky., unveiled today his five-year path to a balanced budget, leaving several federal agencies behind. Among the items on the cutting room floor are the Departments of Education, Energy, Commerce and Housing and Urban Development.
“There’s a lot of things in here that everybody could agree to, Republicans and Democrats, but nobody’s leading on the president’s side and on our side we felt we needed to put this forward to get the debate started, at the very least,” the freshman Senator explained at a Capitol Hill press conference this afternoon.

Rand Paul must have been reading my blog.  I suggested the same thing here, here, and here.

And for your viewing pleasure, I’ll leave you with this. 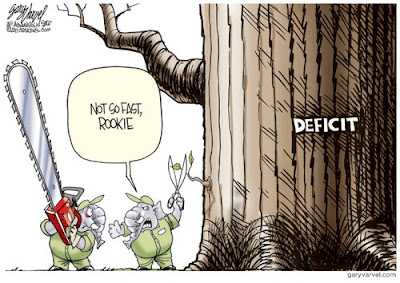