The MSM is on a feeding frenzy over Baltimore. As happened in Ferguson, the peaceful protesters were run off by the thugs and imported agitators. The rioters were supported by such luminaries as Jesse Jackson and Al “the Slims” Sharpton. If you don’t know what, “the Slims,” mean, ask a black friend.

Baltimore’s Mayor Stephanie Rawlings-Blake appeared on TV and made a total fool of herself. Correction, she revealed the fool that she was. When her foolishness was spread by the MSM, she blamed, like other fools before her, the media. A lib will never admit fault. It’s always someone else’s fault.

The real question, one that is never asked, is why the protests against police when these large cities are controlled by liberals? If the black communities have issues with their police, surely they’ve discussed the problems with their democrat representatives in the city government. The police report to the city. If there are problems, Mayor Stephanie Rawlings-Blake has the authority to fix them. Why hasn’t she?

Yes, there are questions how Freddy Gray was injured. Instead of protesting the police and rioting, why aren’t the people protesting the Mayor? She is the one in charge.

Wherever a city is controlled by liberals, the city is in trouble. Detroit, with over sixty years of democrat controlled city government looks like a war-zone. Businesses were forced to leave by an oppressive city government. Large stretches of the city have been abandoned and Detroit is shrinking in population and territory. 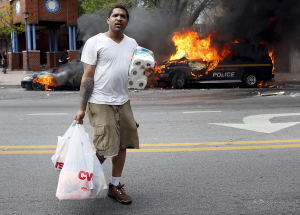 Instead of managing the situation, Baltimore’s Mayor made it worse, “giving them space to destroy,” as she was quoted. Mrs Crucis and I watched the confrontation on TV last night. The police did nothing. Whenever the rioters approached, they retreated. When rioters looted and burned businesses, the police watched and did nothing. According to on-the-scene news reports, only 200 police confronted the rioters. Where were the rest of the police?

Surely a city the size of Baltimore has more than 200 police officers on their force. Sent too few police to confront violent rioters is worse than doing nothing—the Mayor risked the lives of her police while doing nothing to stop the rioting.

The Mayor issued a curfew order from 10PM to 4:30AM—starting today! Why didn’t she issue one for last night? The Maryland governor declared a State of Emergency and has called out the National Guard. Where are they?

There used to be a quaint custom called, “Reading the Riot Act,” to rioters. There were given time to disperse, a short time, and then they were forcibly removed, arrested, or shot if the rioters offered violence. A local Baltimore reporter was rescued from the rioters by a shotgun toting business owner. The police did nothing to protect peaceful citizens nor their property.

Someone with the guts to read the riot act is what Baltimore needed. The city didn’t get it. The Mayor blames the media.

Mayor Rawlings-Blake has personified the other old saying: “People get the government they deserve.” The citizens of Baltimore have a city government of incompetence and ineffectiveness. A government unwilling and unable to act regardless of the consequences.

2 thoughts on “Getting the government they voted for”