Mrs. Crucis and I decided to make some detours on our way to and from Nashville last week. The two of us are originally from Illinois. I was raised on a farm between Benton and West Frankfort, IL. She was raised in the small town of Waterloo, IL. We met when we attended Southern Illinois University in Carbondale, IL.

It had been a long time since I had gone back to Benton and the Farm, over thirty years when my sister and I sold the Farm to an elementary school friend. At the time, he said he intended to tear down the old house and build a new one next to it.

Thirty years. It’s hard to imagine the changes that takes place in that length of time. I expected change. I couldn’t imagine how it would appear.

We left Cass County at 4:30 in the morning in light rain. That rain stopped by the time we reached Columbia. Our route was simple, I-70 to Illinois, I-64 to I-57 at Mt Vernon, then south on I-57 to Franklin County. Benton is the Franklin County seat.

I never saw the entrance. The last time I was on that highway, I could see the lake to the east. In thirty years, trees have grown tall. I continued to look for other landmarks. One of my high school classmates lived at the US Forestry headquarters north of town. At one time there had been a fire tower at the site. I did see a small Forestry sign when we passed the site but the house where my classmate lived was gone as was the fire tower. I really didn’t expect the fire tower to remain. They were being phased out before I left for college. I did expect to see the headquarters and the house. It was built by the CCC during the 1930s and was a local landmark.

Still the terrain had changed. New houses had been built along that state highway where pastures once lay. I remembered some of the older houses that remained but most of others had been built during my thirty year absence.

Benton has four main streets. They are named, unimaginably, North, South, East and West Mains. In the center of town is the county courthouse. Benton has changed little from the northern side of town. The Franklin County Hospital remains. The much smaller Benton Community Hospital where I was born has not. I knew approximately where it should be but saw no trace of it.

We drove around the square. The Barton and Collins furniture store was empty. The Williams Hardware store was gone too. Mrs. Williams was my first through third grade teacher. Her husband ran the hardware store. They were family friends.

On around the square we drove. The old Five ‘n Dime was now a law office, Hart and Hart. Judge Hart was my father’s lawyer and helped me register his will. In the south-east corner where the Capitol Theater once ruled was a fountain and small park. Further around the square stood the Wood building. At one time it was the tallest building in the county. It may still be. Some things still remain. The adjacent Benton Cafe, however didn’t. It is now a tattoo parlor.

We left town via South Main. The old American Legion Post is now a funeral home. The legion post had moved further south and further from the street.

South we continued, south past the Odd Fellow cemetery where my parents are buried. I thought briefly of stopping but didn’t. They are not there.

Route 37 continued south until we reached the turnoff to the Farm. We used to call the road Rabbit Ridge. The road sign now says it’s Forrest Church Road. Forrest Church is a small Missionary Baptist Church a few hundred yards from the Farm. Mom, Dad and I often walked that distance to church in the Spring and Fall when the weather permitted.

At this point I began to experience…a dissonance. It’s hard to explain the sensation. I could see the country as it appeared. But superimposed on that vision was another from my memory. Instead of the asphalt road, I saw the old gravel road I had traveled so many times. New houses had been built where once Holstein dairy cows had grazed. Hill City School where I attended grade school had disappeared among a stand of trees. The school district had dissolved while I was in college merging into the new Benton Unified School district.

Hill City School, in contrast to other school districts of the time, was rich. Ten acres had been deeded to the school early in the 20th Century, and, unlike most of the land in Franklin County, the school owned the mineral rights beneath its property—coal, gas, and oil rights. There were two producing oil wells on school owned property and the school received more revenue from the oil, coal and gas royalties than could be spent.

In the eight years I attended Hill City School, it expanded three times. In that expansion the school built a new cafeteria, a new gym, bleachers and stage. The coal furnace was replaced with an oil fired one—a radical upgrade in a county where most of the heating came from coal. A final upgrade was a ball diamond on a three acre field next to the school plus new play ground equipment. My father was a school board member and later the board president. He felt it was his duty to spend the schools income to make it one of the best schools in the county. If he didn’t succeed, it wasn’t for lack of trying.

When the Benton Superintendent of Schools, eying covetously the Hill City revenues, decided to absorb Hill City School into  Benton’s Unified District they failed to examine the deed closely. It contained a provision where the mineral rights reverted to the heirs of the original property owners if the Hill City School District was ever dissolved. Benton annexed the Hill City district but they didn’t get the money! After several failed lawsuits, they finally gave up.

We continued west. Several of the older homes were gone. Forrest Church, however, remained almost untouched in appearance. One exception was the outhouses that once stood behind the church. They were gone.

When it was our family church, the church building had no running water. No water for the kitchen, no running water for toilets. Whenever we had a church dinner, Dad brought several 10 gallon glass water bottles that he filled from our cistern.

The Farm was only a hundred yards away now. My dissonance continued. The old brick Doty house next to the church was gone. A newer home had been built further back from the road. Closer to home, Kenny Shoemaker‘s place was gone, too. Another stood to the right of his old homesite.

The Farm sat across from the road from Kenny’s old place. The pond remained as I remembered. The barn was gone. It had collapsed not long after we sold the farm. But when I arrived at the site of the Farm, I didn’t recognize it for a moment.

The house still stood. IT WAS SMALL! It was now the Hill City Water District office and was closed. If it had been open I don’t know if I’d have had the courage to stop and go inside. 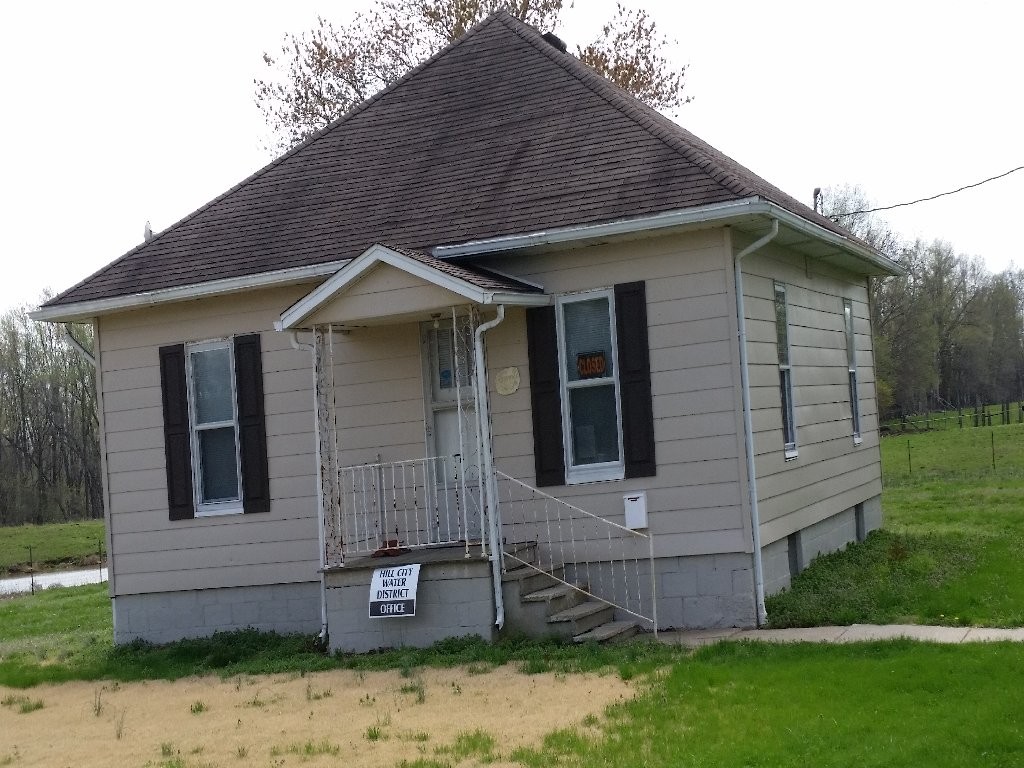 It appeared to be scarcely larger than an old army pyramid tent. The maple trees in front and to each side of the house were gone. The sunken area on the east side of the house had been filled in. Superimposed on this ‘new’ building I could still see our TV antenna perched at the peak of the house. It had been held upright by guy-wires anchored at each corner of the roof. When I was in high school, I ran a horizontal loop SWL antenna around those guy wires and another long-wire antenna from the house to the old maple tree next to the barn. The maple on the west side of the house and the cistern under it had vanished, too.

The garage was gone and where the orchard once stood was a grove of tall, forty foot tall or more, trees. The shorter apple and pears trees had somehow been replaced with hardwood trees with a house slightly hidden among them.

The vision of this new landscape, superimposed with the old from memory was shocking. The Farm had disappeared. All the memories of growing up, of our neighbors, of the events that had occurred, were fading away as if they had never happened.  My memory of them remains the only record.

We drove slowly past the farm. John Davis’ home remained, missing only a few trees. Another house now sat further down the road in his old cornfield. Sy Malone’s house down the road remained as well. We pulled into his driveway to turnaround. Behind the house, under an open carport where once Sy conducted his welding business, lay two deer in the shade. I thought for a moment they were decoys until one flicked an ear. They watched us calmly and never moved while we backed out to turn back towards the Farm.

The old adage says you can never go home again. In a sense that’s true. The home I once knew is gone, never to return. My memory remains fresh, however, and as long as it does, the Farm exists as it once was.

2 thoughts on “You can go home again…but…”