Right to Work has passed the Missouri House once again. And again some ‘Pub Senators are trying to block it. Senate President Pro Tem Tom Dempsey was mentioned in the Washington times:

Senate President Pro Tem Tom Dempsey said that chamber also will debate the “right-to-work” bill limiting union fees, which passed the House quickly but faces opposition among some senators. Dempsey has said he’s unsure how he would vote. — Washington Times.

The RTW bill handily passed in the House. But, when it arrived in the Senate, the union shills worked hard to block it from coming to a vote. They know they’ll likely lose if a vote is taken. Don’t be fooled. The unions are one of Dempsey’s larger contributors if not the largest. He did his part by forcing a debate on the bill. His intent is to have the RTW bill amended and sent back to the House. It’s a time killing tactic. It’s worked before. 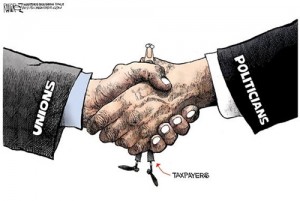 Paid for by taxpayers.

Did you know that Missouri taxpayers are paying for union shills to lobby our legislature? It’s true. The Missouri Torch has the story.

Here’s how it works. A government entity, say  Missouri’s Department of Corrections, or the Parkway School District hire some union officials. But—they do no work for their taxpayer funded salary. Instead they spend their time lobbying in Jeff City and elsewhere—taxpayer paid, full time union lobbyists. The records detailing the scheme are there—if you can get them. That’s the trick.

Read the story in the Torch and then realize how the unions have their hands in all our pockets.