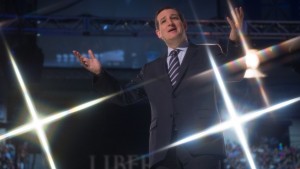 Senator Ted Cruz delivers remarks before announcing his candidacy for the Republican nomination to run for US President March 23, 2015, at Liberty University, in Lynchburg, Virginia.(PAUL J. RICHARDS/AFP/Getty Images)

Finally there’s an announced candidate I can vote for. Ted Cruz announced his candidacy for President in the 2016 election at the Liberty University to a rousing ovation. He immediately went to the top of the polls

Of course he’s at the top of the polls. He’s the only one who has officially announced his candidacy by-passing the ‘exploratory’ phase completely.

His speech is already on YouTube. In his announcement, he vowed to end Obamacare if a repeal appeared on his desk and to end the IRS.

But the trolls are already out. Obama has already stolen a step on Cruz by buying the TedCruz.com domain name. It a liberal front supporting Obama and illegal immigration. It’s a tossup if the new domain owners are Obama or La Raza or one of the other uberliberal front groups. It really makes no difference as long as they prevent Ted Cruz or his supporters from using it.

The trolls seized the TedCruz.com domain but the real Ted is using TedCruz.org. On his website, Ted Cruz lists his policy positions and his voting record unlike liberals and RINOs who fear to make public their positions and voting records.

Pedro Gonzales, who is the editor of a website called NewsMachete.com, wrote a column about Cruz in the American Thinker.

Now that Ted Cruz has decided to run for president, he is the first one with a website that actually states his policy positions.  Other would-be candidates, like Scott Walker and Rand Paul, have none, since they are not yet declared candidates.  (They do have websites for their current office, but none specifically addressing policy positions of what they would do as president.)

There’s a lot to chew over at TedCruz.org, but here’s a sampling of Cruz’s positions.

Authored the Obamacare Repeal Act as his first piece [of] legislation.

Led the fight to defund Obamacare — the largest regulatory challenge facing our nation which has resulted in killing jobs, cutting workers’ hours, and causing millions of Americans to lose their doctors or health care.

I remember when Cruz had his “mini-filibuster” on this subject.  He spoke for 21 hours straight.  He and Mike Lee were basically alone; no other senators came to offer support for any substantive period of time.  Rand Paul made a cameo appearance for about five minutes.

All the other candidates support ethanol, except for Rick Perry.

Rand Paul, to his credit, has been outspoken on this as well.

Demanded a 60-vote threshold vote on a clean debt-ceiling increase in February 2013, when Republican leadership wanted to allow the Democrats to raise the limit with a simple majority vote.

Led the charge on behalf of 13 states to successfully defend, before the U.S. Supreme Court, a federal law that bans one form of late-term abortion, the Partial Birth Abortion Act.

Fought for the right of states to define marriage, without intrusion by unelected federal judges, by drafting the State Marriage Defense Act.

Opposed the Obama Administration’s dangerous deal with Iran that would allow Iran to pursue nuclear weapons.

Successfully pressured the Obama Administration to lift its unprecedented FAA ban on flights to Israel after exposing the move as, in essence, an economic boycott of our strongest ally in the Middle East. The ban was lifted within 36 hours of the Senator’s actions

Championed the Expatriate Terrorist Act to prevent Americans who join ISIS from returning to the United States to commit acts of terror at home.

Joined Texas and 25 other states in a lawsuit to stop President Obama’s illegal executive amnesty.

Authored legislation to triple the size of the U.S. Border Patrol.

Played a crucial role in preventing federal legislation to restrict the Second Amendment rights of Americans.

Led 31 states in District of Columbia v. Heller where the U.S. Supreme Court overturned a ban on firearms in a 5-4 landmark decision.

This is just a small sampling of the material on TedCruz.org; there’s a lot on his positions and record there.  People think of him as being only a senator in his first term, but they forget that he was solicitor general of Texas and litigated a lot of cases to preserve our freedoms.

I like a lot of what I read here, and I suspect that you do, too.  I look forward to the other candidates declaring and putting up websites showing their policy positions so we can compare and contrast.  But for now I’m impressed not just by the amount of information Cruz has put up, but by the degree of detail.

Now we conservatives have a candidate who is one of us. Who has the same dreams and visions that we do, one who wants to restore constitutional government to Washington.

And finally, he’s a flat tax advocate rather than that god awful consumption/national sales tax.