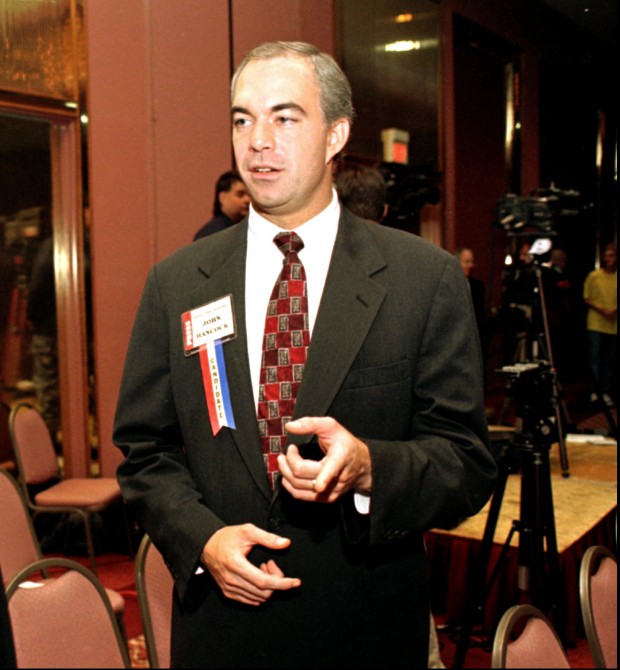 The controversy surrounding newly elected Missouri GOP Chairman John Hancock is not subsiding. Calls for Hancock’s resignation continue but the state’s GOP establishment, such as Roy Blunt, Ann Wagner and others are keeping quiet. Catherine Hanaway is not escaping unscathed. It was her political adviser, Jeff Roe, a Kansas City-based Republican political consultant, who created a vile radio ad that was broadcasted across the state. In that ad Schweich was called, “a little bug,” and was referred to as, “Barney Fife.”

Across the state line, Sam Brownback, who handily won re-election amid challengers from a plethora of RINOs and democrats masquerading as ‘Pubs, is working on the state budget. One of the election issues was tax cuts and it was one of the planks of Brownback’s campaign. Now it’s time to him to fulfill that pledge.

According to the Kansas CIty ‘Red’ Star, Kansas is facing a shortfall in revenues. They, and Kansas Libs and RINO (are there any difference between the two?) blame income tax cuts for the shortfall. Instead the real culprit is that Kansas has been, and is, outspending their revenue. Perhaps it is time for a requirement of all state legislators and administrators to take a debt reduction course by Dave Ramsey.

Until then, Kansas continues to spend, spend, spend. Uncontrolled spending with no oversight where, how, nor why spending occurs. Every dollar in Kansas’ budget should have a target, a goal, a plan that is to be accomplished for that dollar.

That has not happened. It is now time for it to happen

The real problem with all levels of government is the lack of real, well-thought out and well-studied plans. Regardless if taxes go down or up, government must have goals to direct their spending or reduced spending.  All too often government throws money at issues with no goals nor plans for the funds and then are surprised then no goals are set, nor when nebulous expectations of the spending fail to appear.

Brownback appears to realize this. The libs and RINOs continue to scream for more money on education. The truth is that education wastes the funds they receive today. With careful planning and reducing the discretionary spending by the state’s educators, real results can be achieved. In past years, educators and their sycophants have deliberately sabotaged any efforts to rein-in their wastage. Perhaps term-limits for the Board of Regents and the other state educational boards—and elimination of tenure, would be a start in the reconstruction of education within the state.

It’d be a good start.