…with full funding for Obama’s amnesty for illegal aliens.

John Boehner, D-OH, pushed through his ‘clean’ DHS funding bill through the House with only 75 ‘Pub votes. Every democrat voted, “Yea.” One hundred sixty-five ‘Pubs voted, “Nay!” Even with the MSM blaming the dems for blocking the original funding, McConnell and Boehner worked diligently to snatch victory away from the ‘Pubs and give it to Obama and his dems in Congress. All of Missouri’s ‘Pubs, except for Representatives Billy Long and Jason Smith voted against the bill. Representatives Long and Smith were in Missouri to attend the funeral of Tom Schweich. 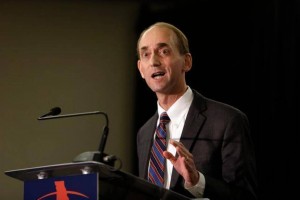 Speaking of Tom Schweich…there has been some political fallout from John Hancock’s anti-Semitic remarks against Tom Schweich. today’s PoliticMO Newsletter included this paragraph.

POLITICAL FALLOUT — ‘Schweich spokesman leads calls for resignation of Missouri GOP chairman,’ PoliticMo: “While the politics surrounding the apparent suicide of State Auditor Tom Schweich had stayed below the surface in the lead-up to Tuesday’s funeral, that band-aid was ripped off as quickly as Schweich’s casket left the sanctuary here at the Church of St. Michael and St. George. In a brief interview, Schweich’s former spokesman, Spence Jackson, said John Hancock, chairman of the Missouri Republican Party, should resign immediately after allegations that he had led an anti-Semitic campaign regarding Schweich before Christian conservative donors.

“’There is no way that the Missouri GOP can move forward under his leadership for the reasons that Sen. Danforth made out this morning,’ Jackson said. ‘He needs to resign and Catherine Hanaway needs to call on him to resign. It is unconscionable to think that the Missouri GOP can be successful in 2016 as John Hancock as the chairman.’” — PoliticMO Newsletter. — PoliticMO Newsletter.

I didn’t have a vote in Hancock’s selection as the Missouri GOP Party Chair. Of those being considered, I preferred another. Hancock was the choice of the state’s GOP establishment.

Now we’re seeing the results of that flawed choice. It’s not a case of ‘he said, she said.” Hancock has admitted starting the whisper campaign against Schweich. In the last decade , those who have chosen the route of smear and libel in their campaigns have lost their elections. Missouri has no room for smear tactics regardless of the office and especially by a so-called ‘Pub, Hancock, against another ‘Pub, Tom Schweich. Hancock must resign.