The Church of Man-made Global Warming claims all the snow falling this winter is a result of greenhouse gases. Some NASA pseudo-scientist said this in an interview. We have proof these pseudo-scientists have falsified data to support their fraud. They arbitrarily raised the temperature reported by sensors around the world. They were caught when someone else checked the raw data for those sites and the results didn’t match the claims of the pseudo-scientists.

But this isn’t a rant against those charlatans. I just wanted a lead-in to this: 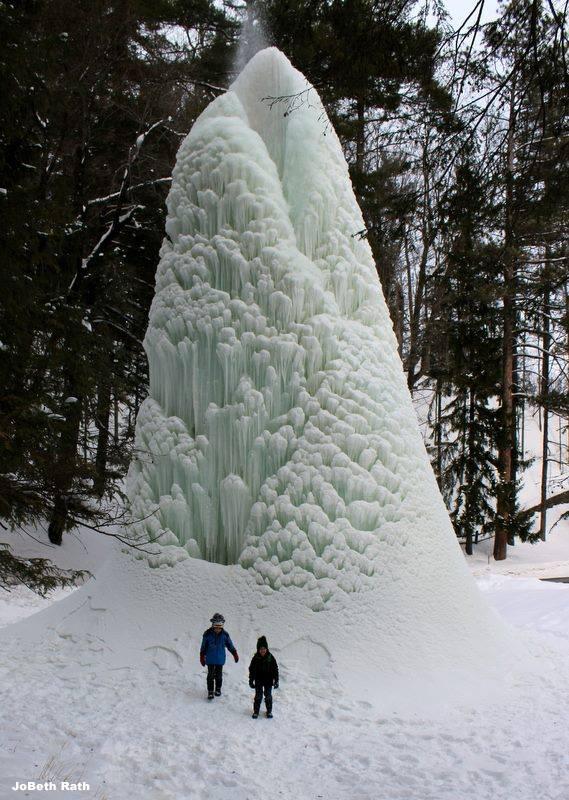 CASTILE, N.Y. (AP) – The arctic conditions have turned a fountain at a state park in western New York into a five-story-tall “ice volcano.”

The pressure-fed fountain is in a pond near the Glen Iris Inn at Letchworth State Park, which straddles the Wyoming-Livingston county line 40 miles south of Rochester. Days of subzero temperatures have formed a solid cone of ice several feet thick with water still spouting out of the top.

NATO, or perhaps, just the EU, appears to be on a collision course with Putin’s Russia. After a shaky ceasefire between the Ukrainian government and Russian surrogates masquerading a rebels, the war of words has shifted further west.

Ukraine crisis: House of Lords criticises EU and Britain for ‘sleepwalking into crisis’ as Moscow and Nato remain on diplomatic collision course

The fraught relationship between Russia and the West, which was supposed to improve following an agreement over Ukraine, has descended instead into renewed acrimony after a series of tense military and diplomatic confrontations.

France and Germany, which had brokered the Minsk accord last week, were yesterday trying to hold together the increasingly fragile ceasefire in Ukraine amid reports that fighting was spreading once again. Kremlin-backed separatists and Cossack fighters triumphantly paraded through the shattered town of Debaltseve, a strategic point they had captured in the past 48 hours.

Britain, which along with the EU will be strongly criticised by a House of Lords committee today for “sleep-walking into this crisis”, was drawn towards centre-stage after two Russian Bear bombers off the coast of Cornwall – but just outside UK airspace – were met by RAF jets scrambled from their base in Coningsby, Lincolnshire.

British Defense Secretary Michael Fallon, speaking before Parliament, “accused President Vladimir Putin of trying to extend his campaign of destabilisation to the Baltic countries. The Russian leader, he said, presented as much of a threat to Europe as Isis.” — The UK Independent.

Amid this discussion, there is one glaring omission: any comment from the United States. “The US administration has put on hold a decision on whether or not to supply the Ukrainian government with heavy weaponry; White House spokesman Eric Schultz said.” — The UK Independent.

After decades of dependence on the US military to safeguard their countries, the EU and other European nations have suddenly realized they are defenceless against Putin’s aggression. Europe has allowed their Cold War militaries to wither, failing to maintain their contributions to NATO and now, when that NATO strength may be required, it no longer exists. Europe depended on the United States for protection but now, suddenly, that dependence has proven to be fool-hardy amid Obama’s incompetence displayed around the world.

Words, actions, have consequences. Marie Harf has been presented with this lesson. After her farcical response to a question about opposing ISIS with a Jobs program, her self-generated controversy has cost her a promotion.

Jen Psaki might be getting the call to the big leagues, but that doesn’t mean Marie Harf is taking her old spot.

After a multitude of ineffective television appearances, headlined by her remark that helping ISIS fighters find jobs instead of killing our way out of war against the terror group should be the U.S.’s priority in the Middle East, Harf is not in line to become Psaki’s replacement as the top spokesperson at the State Department, according to a Daily Mail report.

A source told The Mail that Harf “failed spectacularly” during her “test run” for the top spokesperson job, as Psaki’s move to the White House had been in the works for some time.

“Jen’s move to the White House isn’t something that happened overnight,” a State Department official said, “and Marie’s TV appearances were an audition of sorts, a test run, and she failed spectacularly.”

Will Marie Harf learn from this lesson of life? I doubt it. She is still the poster-girl for every blond joke ever told.