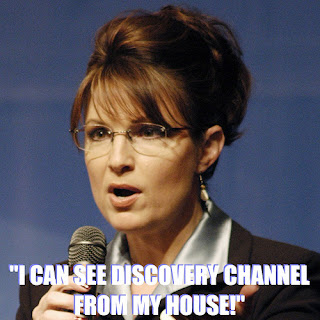 My wife and I watched the first episode of Sarah Palin’s Alaska Sunday evening. There are numerous reviews many with positive reports and then there was the liberal media giving the show their usual response.

Initial reports Monday morning indicates the show had 5,000,000 viewers—the largest audience in the TLC channel’s history.  In fact, it was larger than the 3,000,000 average for Bill O’Reilly!

As usual, most of the media was speculating whether Palin was using the show as an entry into the 2012 election cycle.  There were a few “Palinisms” scattered through the show if you were listening.  I doubt they were sufficient to change anyone’s political views but they most certainly tweaked liberal noses.

If for nothing other that the views of spectacular Alaskan scenery,  we’ll watch again next Sunday night @ 8PM CST on The Learning Channel.