I wrote last Thursday about getting back into Ham Radio. I’ve made one addition to the Crucis’ Court website. I’ve added the American Radio Relay Leaque, or ARRL, Centennial Logo to the sidebar and a link to the ARRL Website.

The ARRL was founded 100 years, in 1914, ago by Hiram Percy Maxim. It’s initial members were from the Radio Club of Hartford, CT. It’s grown in membership to over 150,000 scattered world wide.

The Centennial isn’t the theme for today’s post. Change, is. One such change is the appearance of my Ham shack, i.e., my office where I spend most of my day. Usually, my area is piled with books, CDs, various papers, a coffee mug and thermos, plus my PCs.

I decided to clean up the place. Below are three photos. The first one is before I started. 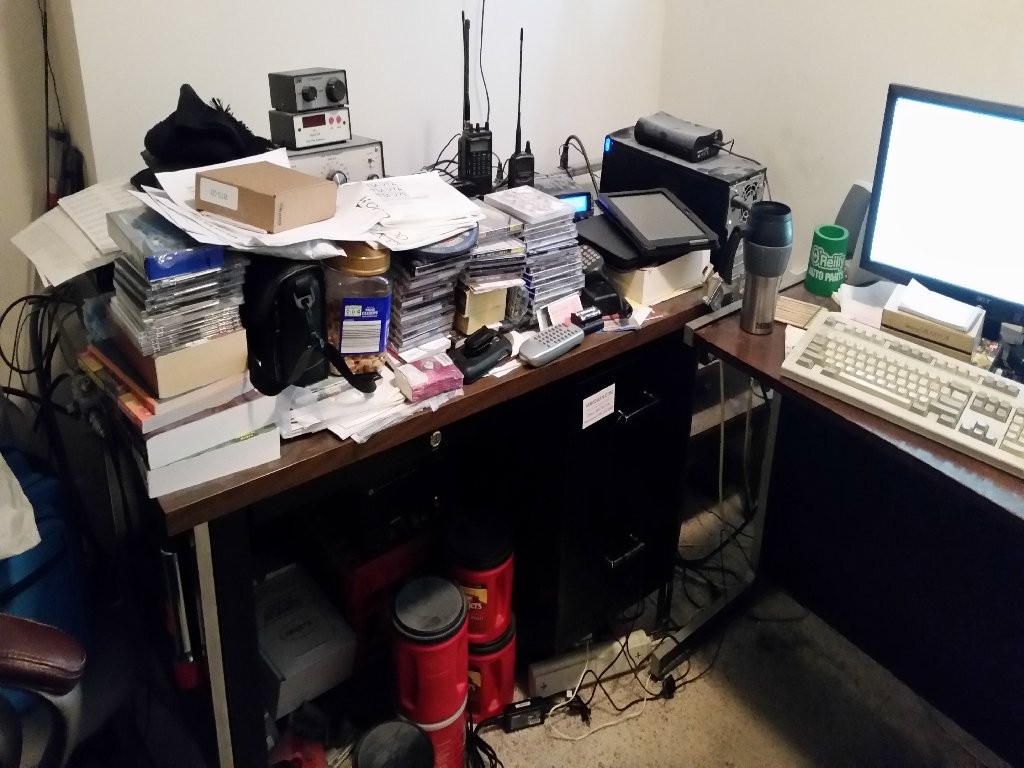 The ‘Before’ of my Hamshack cleanup.

The next when I was half through. Cleaning up included a LOT of dusting. Our cats’ catbox is off in a corner. It doesn’t smell but the kitty-litter produces a lot of dust. 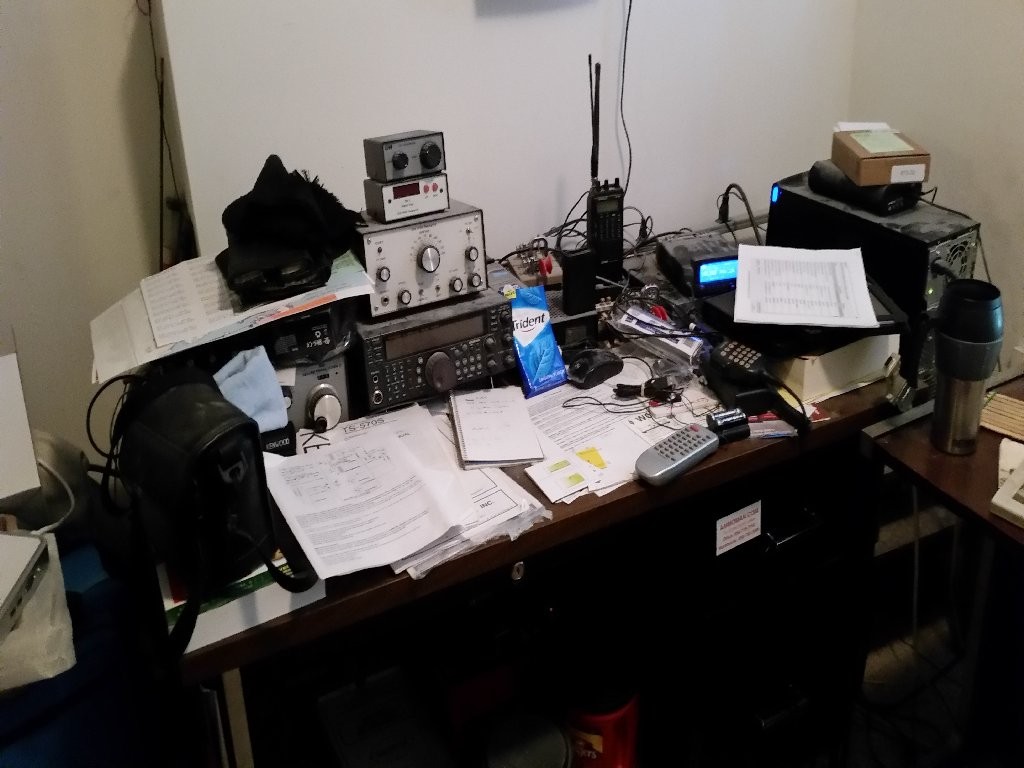 Halfway through the cleanup. You can see my Kenwood TS-570S and two QRP rigs now.

The third is a quick photo of my CW keys. The black middle one was hand-made by a ham from Springfield who is now a silent-key. He was a retired machinist for the railroad and hand made all the components of the key from hard brass including the screws. It is truly a work of art. 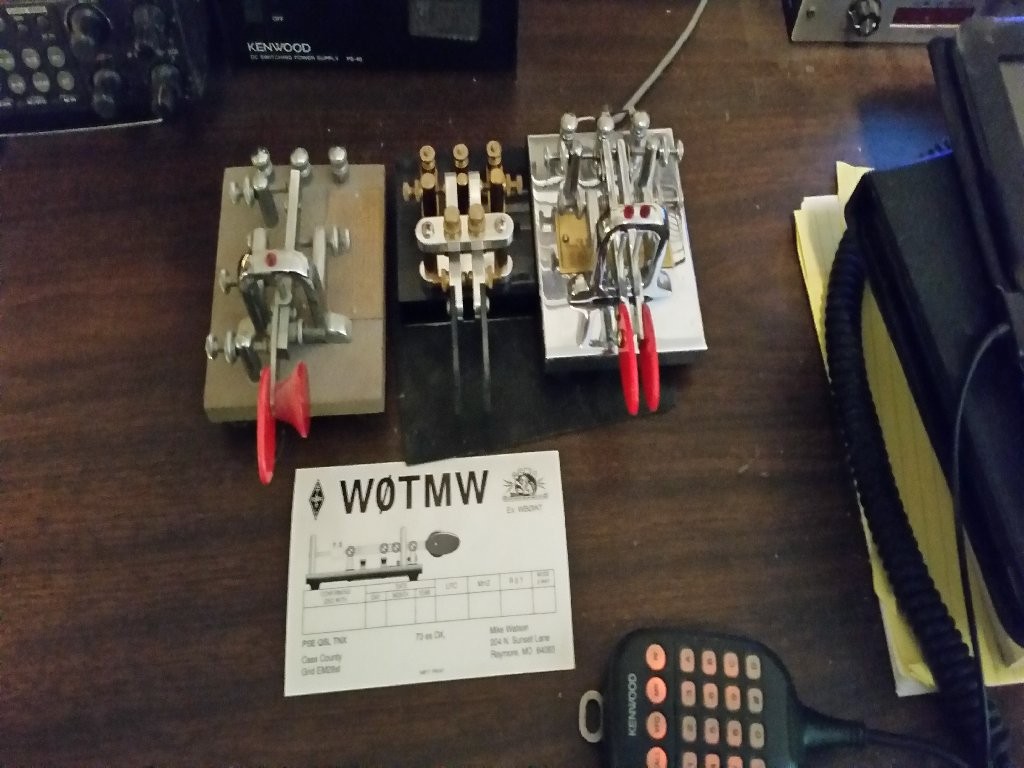 The left and right paddles are from Vibroplex. The middle one was handmade by a Ham in Springfield. MO.

This last photo is the finished product. You can actually see my main HF transceiver. The two smaller radios are low-powered, 5-watt, CW only transceivers that I built. I’d like to build more but my eyes aren’t up to doing surface-mount soldering anymore. 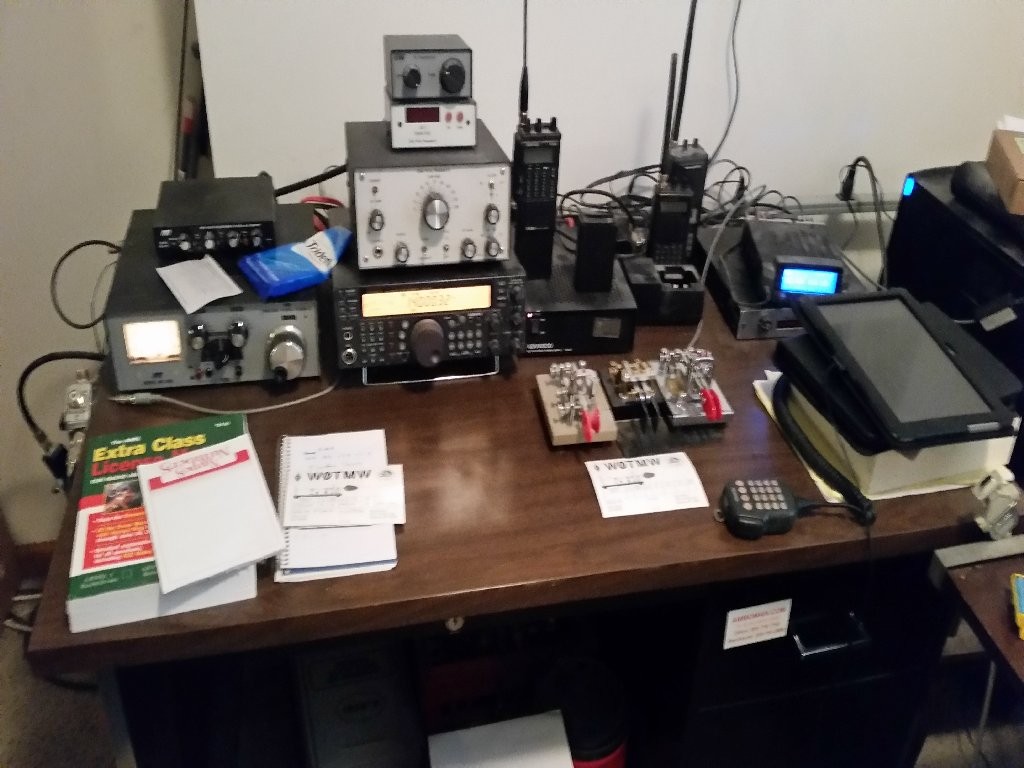 Finished. Well, mostly. Still a lot to do.

I can at least monitor the ham bands. There were a couple of DX contests going on over the weekend and it helped to refresh some of my skills…especially CW. I’m woefully out of practice.

I can’t transmit yet. My HF antenna, a Hy-Gain DX-88, is ground-mounted in the back yard. I installed it when we moved into this house 18 years ago using buriedRG-8 coax. That worked for awhile, but RG-8 isn’t made to be buried. Over the years, moisture has leaked into it and it appears to be shorting. It’s OK for receiving but not for transmitting. In addition, my vertical antenna requires a counterpoise of ground radials. I made some, a matched 1/2 wavelength, for each band. That worked well, too. But, eighteen years in the ground has corroded them as well. New radials are needed.

I’ve my project for the Spring. I think I’ll enlist my grandson to do some of the stoop-labor.

Speaking of changes. My ham shack isn’t the only thing changing. Prices of ham gear is up! When I was first licensed in 1972, I was in the Air Force stationed at the now closed Richards-Gebaur AFB between Grandview and Belton, MO. It’s closed and former-Mayor Cleaver destroyed it so it wouldn’t be a competitor to the down-town airport.

Be that as it may, I couldn’t buy new ham gear on what I was paid by the Air Force. A friend was in charge of the ground radio and MARS station. One Saturday we decided to visit Henry Radio in Butler, MO. Henry Radio was one of the pioneers in ham radio and sold a premier Amplifier, the Henry 2K. At the time, it was the Rolls-Royce of ham amplifiers.

The practice at the time, and still is for that matter, was to buy used, insure it’s fully functional, use it for a time, and then trade it in on a slightly better radio. I did that a lot in those early years and built a lot of HeathKit radios and kits, too. I built a HW-101 transceiver and traded that in a few years later on a SB-102 kit. I used the SB-102 for a number of years through most of the 1970s. The Heath SB-102 was known as the Poor Man’s Collins KWM-2. The Collins cost over $1,000. The SB-102 cost a couple of hundred.

The Heath quality, and the fact that the kit’s manual made maintenance easier, has allowed many hams to continue to use their Heathkits through today. It’s not uncommon to go to a hamfest and still see Heath radios for sale.

Since then I switched to Kenwood transceivers. I bought a Kenwood TS-520, new from Henry Radio years later. It was serial number 77. I didn’t notice the rig’s low serial number at the time. Years later I was able to trade it even for a much, much nicer radio. That low serial number paid off.

As I said in the earlier post, I’ve been off the air for a number of years. When I started looking at the prices of new coax and gear, my eyes nearly bugged out at the increase of the cost of gear and parts! Prices has reached the point where a new ham, or a young one for that matter, can’t afford to buy new equipment.

Fortunately for all, the older rigs are still available on the used market and from hamfests. A new ham can still buy the older gear cheaper than new. Older amateur radios have appreciated over the years. Many of these older radios still bring a price equal to, or higher than their price when new.

When you hear a signal over the air, you have no idea what equipment made the signal. A WW2 surplus radio sounds the same and a brand new transceiver when in CW mode. Ditto audio transmissions. My old Heath SB-102 sounds no worse than my current Kenwood TS-570S.

It does take some time, but a ham can accumulate equipment of the years at a modest cost…when looking back. Sigh…if only the new ham transceivers cost now what my SB-102 cost in 1976. I’m glad I bought my stuff when I did. It would be really difficult to buy the same at today’s prices.