…you’re a target of any fool blathering nonsense that comes down the road. There’s more truth in that statement than many people realize.

Obama spoke at the National Prayer breakfast and made a fool of himself. That, in itself, is not surprising. What was surprising was his logic that gave a pass to the atrocities committed by ISIS.

Let’s take a look at the Crusades. There wasn’t just one. There were several, including one called “the Children’s Crusade.” 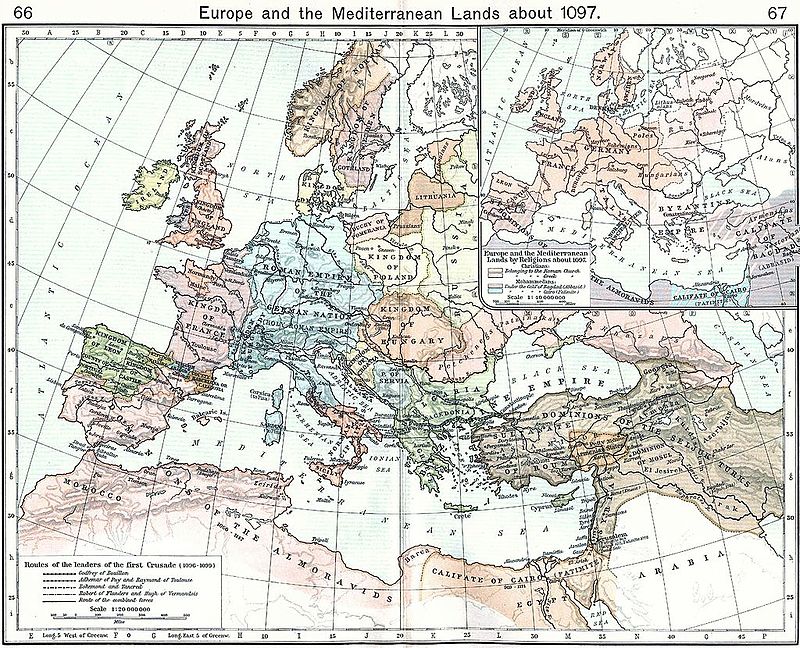 Map of Europe and the Mediterranean Lands, Circa 1097.

The first Crusade began around 1095 supposedly in response to a plea for help by the remnant of the Byzantine Empire. The Muslim Seljuk Turks had invaded the Byzantine Empire and the Empire was losing. The Empire lost the battle of Manzikirt in 1071. After that battle, the Turks proceeded to seize most of what is known today as Turkey.

According to many historians of that period, the pleas from Byzantium were not the primary motivator of the West. After winning the battle of Manzikirt, the Seljuk Turks proceeded to consolidate their new territory. They did so by slaughtering any Christian, Pilgrim and Jew they found or forcing them to convert to Islam. They had done the same, previously, when the Seljuk Turks seized Jerusalem a few years earlier.

In 1065 the Seljuks began a campaign of persecution against Christian pilgrims in the Holy Land in which the Bishop of Bamberg and 12,000 pilgrims were massacred by the Muslims only two miles from Jerusalem. — Crisis Magazine.

News traveled slowly in those days. The massacre at Jerusalem was still fresh in the minds of the Cardinals and the Pope in Rome when the plea from Byzantine Emperor Alexius I arrived. By that time, the Church was already in the process of calling for a Crusade to free Jerusalem and resume the Pilgrimages.

In all, there were eight crusades from the first in 1095 until the last in 1279 with the Invasion of Tunisia by King St. Louis IX of France.

The later Hapsburg-Ottoman Wars are thought by some to be a continuation of the Crusades by the Muslims of the Ottoman Empire. The Muslim invasions of Europe continued for another 300 years after the Eighth Crusade culminating with the Battle of Vienna in 1683. Remember that date—1683! It was just 100 years before the end of the American Revolution. Muslim aggression was more recent that many now realize.

Not only more recent, but also much earlier than many know. In fact, Muslim forces invaded Europe well before the first Crusade, seizing modern day Spain and marching deep into France.

The Crusades were the result of Muslim acts of atrocity and in response to Muslim invasions of Europe. How many know that today? Is it being taught anywhere? It was a fifteen-minute discussion when I took Western European History in college.

I had intended to include a history and background of the Inquisition but that will have to wait for another day. Just one bit of information, the Inquisition wasn’t just in Spain. It covered most of Europe and throughout the Holy Roman Empire.

If/When you listen to Obama’s pack of lies from the National Prayer Breakfast, read this and know the truth.