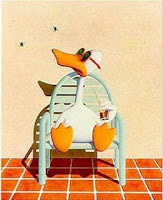 I saw this cartoon on Brigid’s blog and I had to steal barrow it. My brother-in-law Dick Harriss was an avid hunter. When the weather turned cold and duck season arrived, Dick would arrive early on Saturday, gather up Dad or me or whomever was available and off we’d go hunting. Grandma even went once and bagged a couple of Mallards.

The usual spot for ducks was along the Big Muddy River that flowed not far from the farm. The river was thickly forested on both sides from the highway between Benton and Christopher down to near Zeigler in Franklin County, Illinois. There was a lot of game in the river bottom lands as well as swamps, sloughs, side creeks and thick brush.

Mallards and Pintails would often land on the river. Our hunting tactic was to walk along the river moving upwind, downriver in this case, watching for ducks. When we reached a bend, we’d split up. Some would go forward, cutting across the bend of the river. The remainder would move forward. If ther were ducks taking shelter in the bend from the wind, the ones who stayed behind would scare them into flight. If they flew upwind, we’d get a shot at them. If they flew downwind, the others who had moved ahead, would get a shot.

On this expedition, Dick and I were alone. Dick carried his J. C. Higgins 16ga bolt-action. I had my Dad’s 12ga. Remington Model 11. (See prior posts.) We had been hunting for about an hour. The weather overnight had dropped into the low 20’s and had been at that temperature for a couple of days. The ground was mostly frozen and crunched as we walked.

So far that day, the ducks heard us coming before we could get close and would fly away before we could get a shot. Fortunately for us, the wind was picking up so the ducks would only fly to the next bend in the river. We had been chasing a batch (whatever you would call a group of a half dozen ducks) for most of the morning. The temperature had been rising all morning and by noon was near forty. The ground previously hard as cement, was now becoming soft.

Dick and I had reached another bend. It was Dick’s turn to move forward cutting across the bend to get down-river from the ducks. It was a big bend, so I waited about ten minutes before walking forward. I’d gotten within 25yds of the ducks when they took off. I fired at the lead Mallard and missed. They took off downriver so I waited for Dick to fire.

I waited a bit longer but Dick didn’t fire. So, I continued forward walking along the river. It didn’t take long to reach the spot when Dick should have been, but he wasn’t there. I hollered, but it was into the wind and didn’t carry very far. Dick was missing.

I backtracked to the spot where Dick had moved forward and followed his tracks. It wasn’t long before I could hear Dick talking—he was not happy. The area at the neck of the river bend was low and during warm weather would have been marshy. When the temperature had risen, the ground began to thaw. Dick had broken through the frozen surface and was stuck, waist-deep in mud. He couldn’t get out. It was like being stuck in quicksand.

I was lighter than Dick and I could approach him without breaking through. He gave me his shotgun and I took it back to solid ground. I always carried a small hatchet with me in the woods along with some other stuff.

I didn’t have any rope. I used the hatchet to cut a small twenty-foot sapling. Dick grabbed one end and I the other. After some time, Dick got out of the mud, less his boots, socks and pants. It took a little longer to extricate his pants and boots. We never found the socks.

Dick washed his pants in the river to get the mud off while I used the sapling to start a fire. The fire kept Dick warm and dried his pants and boots. We finally got back to the farm around dusk. My Sister Mary Ellen had arrived with their two kids and they all stayed over for the night.

Duck season lasted another week. The following Saturday, Dick showed up again for another duck hunt. Like I said, Dick was an avid hunter. A little mud, cold and embarrassment didn’t stop him from hunting.