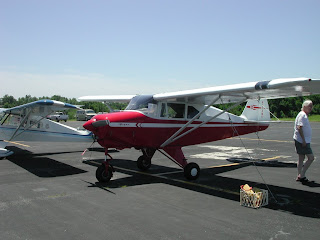 Everyone seems to be writing about the anniversary of Orville and Wilbur’s touch ‘n go around the pasture today. I thought I’d write about something a wee bit different.

Like many, I went into the Air Force hoping to fly. That ended when my eyes were found to be 20/80. The minimum at that time was 20/30. That was 1969 as I remember. I never got rated, but was able to do some interesting stuff.

Now, scroll forward a couple of decades. The urge to fly has never left and I woke up one day realizing that if that dream was to happen, further waiting wasn’t helping. I toured a number of flight schools around the area and most of the CFIs were kids about twenty years younger that me and more interested in gaining flight hours than helping someone learn to fly.

On the south-west side of the Kansas City metroplex is the former Olathe Naval Air Station, since renamed as the New Century Air Center. The Olathe NAS was created during WW2 and had a number of satellite strips around the area. One was later called Gardner Municipal Airport (K34). The airport had two grass strips and one 32′ asphalt strip. On final, that asphalt strip looked like a pencil line on green paper. I hated landing on it with a strong cross-wind.

The operator of the FBO at Gardner was Charlie Craig. He, his wife Ellen, their son, daughter, grandson and Rudder the Airport Cat, ran the place. All were pilots and CFIs although Ellen and their daughter no longer gave lessons. The two ladies shared running the FBO while the men gave flight lessons. Charlie was the only “full time” instructor. He was my CFI and was 83 at the time, had over 30,000 flight hours staring before WW2. His son was an ATP pilot, first for Braniff and later for American. The grandson was a Johnson County Deputy Sheriff and made frequent flights delivering or picking up prisoners. The whole operation was a family affair and they treated all pilots, students, and hangers-on as family.

Charlie and Ellen are gone now. Ellen took a nap one Sunday afternoon and didn’t wake up. Charlie and his daughter ran the FBO for a couple of more years, but their hearts weren’t in it and they sold the FBO to another CFI who was looking for a base of his flight school. Charlie followed Ellen not long after that. He and Ellen were together for over 60 years, never very far apart even during WW2. Charlie was a primary flight instructor for the Navy and Ellen was a ferry pilot based at the same location.

When Charlie reached his 30,000th flight hour as Pilot-In-Command, the local FAA office presented him a plaque and a certificate signed by then President Bill Clinton. Everyone was invited to the party. When the certificate was later mounted on the wall, Bill Clinton’s name was covered.

I miss them both. I shared a number of BLT lunches with them when I arrived around lunchtime. Ellen reminded me so much of my mother and grandmother. She adopted everyone who came through the door. Charlie was a perfect gentleman. I rarely saw him lose his temper and never with his students nor with Ellen or Loetta, his daughter. When Charlie stopped giving flight lessons, he had soloed over 10,000 students.