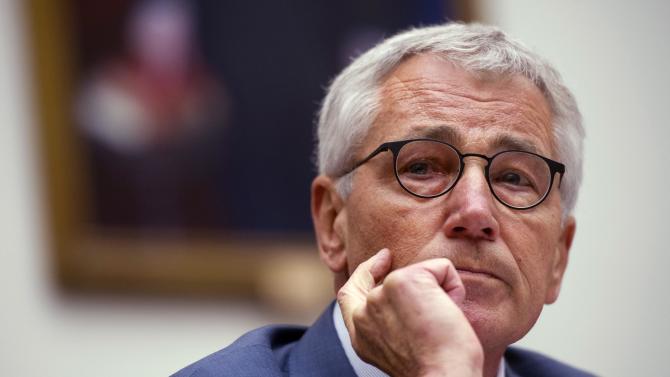 OBAMA FINDS MIDTERM SCAPEGOAT IN HAGEL
In another strong sign of President Obama’s hard tack left in the wake of a midterm drubbing, Secretary of Defense Chuck Hagel is heading for the exits. First reported by the NYT, the cashiering of the Pentagon boss comes after “the two men mutually agreed” that it was time for the only Republican in Obama’s cabinet to go. But given the fact that the White House was the one pushing out the story, it seems more likely that the president had grown tired of the ongoing pressure from Hagel and members of the top brass to take a more aggressive stance on national security threats abroad. The conflict went public back in August when Hagel openly contradicted White House talking points on the threat posed by Islamist militants in Iraq and Syria. While Obama succumbed to the pressure, Hagel’s ouster shows the president seeking to reassert control over his foundering foreign policy. — FOX Newsletter, November 24, 2014

Never let it be said that Obama lets anyone on his staff disagree with him. I wonder which hand-puppet will be chosen next for Sec’y of Defense?

Rand Paul has been the fair-haired boy of Libertarians and the Paulbot wing of the GOP. He has been viewed as an opponent of the GOP Washington establishment. When Ted Cruz and Mike Lee stood up in opposition to Harry Reid, and occasionally Mitch McConnell, Rand Paul stood in the background giving the impression of supporting Cruz and Lee but seldom actually doing so on the floor of the Senate.

I’ve never trusted Rand Paul. In my view, he is too much like his Dad—inconsistent, a bit unstable with a tin-foil hat firmly in place. My view, again, has been vindicated. The reports today have Rand Paul cozing up to Mitch McConnell, worming his way into the establishment and the Ruling Class.

[Flashback: “We’ve developed a very tight relationship, and I’m for him…I don’t think he’s made a final decision on that. But he’ll be able to count on me.” – Senate Majority Leader-elect Mitch McConnell in a post-election interview.] — FOX Newsletter, November 24, 2014.

McConnell, immediately following the election, betrayed the GOP by publicly stating the Senate would not use the only real weapons of Congress against a rogue President—impeachment and removal from office, and the power of the purse—defunding Obama’s acts of defiance to Congress and strictures of the Constitution. When asked what McConnell would do to oppose Obama, McConnell, in essence, said he’d rollover and do nothing. That allows Obama to continue his lawless edicts without opposition…and now Rand Paul will help McConnell to do…nothing.

I have been called, on occasion, a Grammar-Nazi. I accept that label. Why is grammar necessary, and spelling, too? Because correct grammar and spelling enhances communication and decreases confusion and misunderstanding.

It is a failing of education when schools no longer teach grammar, sentence structure and construction, spelling and writing. Not cursive hand-writing, although that should be taught, too, but writing as in Writing an Essay. Clear, concise writing, with proper sentence and paragraph structure, is fading. Others agree with me.

Descriptive versus Prescriptive: Another Left-Wing Scam

Everywhere we look, we’ve got pompous professors telling us they don’t dare prescribe what’s right in language.  No, no, no, no.  It’s not their role.  Nor yours either, that’s for sure.  People can express themselves as they wish.  It’s America, the 21st century.  God forbid we should tell anybody how to do anything.“Weird Al” Yankovic put out a popular video called “Word Crimes.”  It’s gotten almost 20,000,000 views.  In effect, he says: “Hey, moron, do it the right way.”  He got everybody talking about correct grammar.  Boy, we needed that.  Thanks, Weird Al.

Naturally, all the primly pontificating nuisances crawled out of the woodwork to tell us: hey, stop all that prescribing!  You can only describe.

And why?  Because when anthropologists go in the jungle to study a primitive culture, they must remember that the natives are the experts on their own language.  Great.  That’s fine and dandy.  But that has nothing to do with how we should deal with our own language. In our case, you ask the relevant experts (teachers, novelists, journalists), average the answers, and that’s probably a good guide.  But you certainly don’t listen to left-wing scam artists telling you that our experts are not allowed to speak, because anything they say would be prescriptive, and we don’t allow that when we go into the jungle on anthropological expeditions.  Doesn’t this sophistry almost make your head spin?

But look again, and it turns out there is a second sophistry on top of the first one.  These discussions about natives, experts, and ourselves casually presuppose that we are talking about adults.  But many times, without ever acknowledging it, the discussion shifts over to school and the teaching of children.  Isn’t it obvious that the freedom you might give to adults is not appropriately given to children?

In other words, when liberal sophisticates start discussing this issue, they always pose it in terms of freedom, creativity, self-expression, laissez-faire, do your own thing, and gather ye rosebuds while ye may.  Sure, if you insist, adults can wear clothes inside-out and stay drunk.  Let’s not waste time discussing it.  If you want to arrange your sentences backward and break every grammatical rule, go for it.

What we’re discussing now is what’s appropriate in the early grades at school.  Teaching is typically prescriptive, and that’s how it should be.  Schools should teach the right ways to do things.  (This approach has got to be far more efficient than what many public schools are now doing: teach no ways at all, or teach all the ways as if none is preferable.)

Bottom line, what newspapers call Standard English should be taught first.  That seems to be what our left-wing professors are eager to stop.

So what are the pros and cons?  Do you let a child do anything the child wants?  Are you doing children a favor if you allow them to go out with dirty faces or raggedy clothes?  Isn’t it foolish to pretend that children live and learn in a vacuum?

It seems to be common sense and common decency to tell children what is typically done.  With regard to language, this might require explaining regional variations, work-related slang, and even class differences.  Most children can understand these ideas at a fairly young age.  They probably already speak a different way with their friends from how they do with their parents.

To pretend that all these nuances don’t exist is the opposite of teaching.  To pretend that everything is equally acceptable is a nasty sort of nihilism.

Presumably we’re seeing that same worldview when schools refuse to teach grammar.  The point, always, is power – in this case, the power to make the rules.  That’s why the left always maneuvers to control language, semantics, and education.

The sophistry prohibiting prescriptive grammar is not about grammar at all.  It’s about the left being able to tell everybody else how to talk, and how to think.  (Note that the anti-prescriptive diktat is itself prescriptive.)

Liberals always want to play their ideological games, using kids as guinea pigs.  If you don’t tell the kids what the prevailing rules are, the kids will be left in an intellectual wasteland.  To excuse this, you have a whole Education Establishment boldly proclaiming that whatever little children say is just fine, whatever it is.  No rules, guessing, and invented spelling – that’s what elementary education is for many.

But how can they justify all this logically?  Well, some genius thought, why don’t we just bring back anthropological field work to our own society?  We’ll announce (and argue with great indignation) that professional authors, English professors, and smart citizens who have used the language expertly for a lifetime have absolutely no special standing.  They should shut up, lest they be guilty of the crime of prescription.  The left has gotten away with this fluff for 75 years.

Sophistry. That’s a word I’ve not seen for a long, long time. Truthfully, now, how many of you know what it means? Don’t know? Here’s the definition. If you and your children don’t know, it’s a good topic for teaching both of you.