What an exciting weekend!

We’re still recovering a bit—me mostly. The trip to and from Indy was uneventful but ohhhh how I wish I still had my Yukon.

I bought a slightly used, dark red GMC Yukon in 2003. I loved that truck/car/SUV. It was big. It 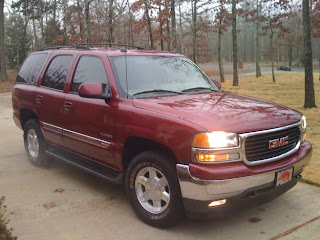 had plenty of leg room. It was comfortable with gray/tan leather interior. It was everything I’d wanted in a vehicle—except for its 15mpg mileage. The photo to the left, while not mine, matches the one I owned.


The key item is “leg room.” My current auto, a 2005 Chevy Equinox, is a good car for local driving and short day-trips. But for anything over a hour or two, it becomes cramped. Really, really cramped!


I drove my Yukon on a 4,000 mile trip the summer after I bought it. We took off towards the Sand Hills area of Nebraska and west up to SW South Dakota stopped along the way at Mt. Rushmore and Sturgis, SD. From there we traveled further west into Montana to see Custer’s Last Stand and then down to see Yellowstone and the Tetons for a 2nd time.


The Yukon had enough room for me to slide the seat back and stretch out my legs. I was almost like sitting in a recliner. Cruise control on…watch the scenery…take photos out the window. I love to watch for wildlife and I’ve been known to stop along the side of the road to take photos whenever I came across something “different or interesting.”


This morning, I stood up along-side the bed and took one stiff gingerly step after another to the bathroom. My feet are still extremely tender and I feel a couple of decades older. Right now I’ve gobbled a couple of Tylenol and in a hour or two I’ll slip off for a shower. I figger that by noon, I’ll be moving close to normal.


I have learned that small cars and long travel times do not, for me, mix. I traded off the Yukon in a fit of pique when it cost me $50 to fill its 25 gallon tank. One tank would last me for a week of work commutes.


I don’t drive that much now. For the last few years I’ve worked from home and now I’m “retired.” One 12 gallon tank in the Equinox lasts me two weeks. I can now afford to feed that Yukon that I once owned.


My Equinox and and Mrs Crucis’ Vibe are paid for. It’d almost be worth another car payment if I found another Yukon…or Tahoe…or even a crew-cab pickup that fits better than the Equinox.