I didn’t find a topic for today. Instead, I’ve found a number of nuggets that I want to bring to your attention. The first of these is Microsoft. In case you weren’t aware, Microsoft is one of the nation’s largest ISP—Internet Service Provider. If you have a HotMail account, you’re a user of that Microsoft network. Microsoft isn’t just Windows, it is more…much more, and they have problems.

By Richard Waters in San Francisco

Microsoft on Thursday scrambled to head off a privacy storm after it was revealed that the software company had searched through the private email of a blogger it suspected of having received stolen software code.

The concession marked one of the most damaging privacy gaffes to hit a leading US technology company since revelations in 2013 that the country’s National Security Agency had been spying on their users. The companies involved, including Microsoft, reacted with outrage at the secret government snooping.

On Thursday, the software company first sought to play down the outcry over its email search in a statement defending the move, before following up only hours later with a promise of new and stronger procedures to reassure users that their privacy would be protected in such cases.

In essence, Microsoft admits violating a user’s privacy—without a warrant. Their promises of privacy went out the window when it affected them. But, that follows their liberal corporate policy. Microsoft is one of the most liberal corporations in the country. Bill Gates, personally, has donated $186 million to boost Common Core. The various Gates foundations are also big contributor to liberal issues.

It is important to know whom to trust and whom is not worthy of trust. Bill Gates and his wife are, I submit, not trustworthy when it comes to personal liberty, freedom, and  to the education of our children. 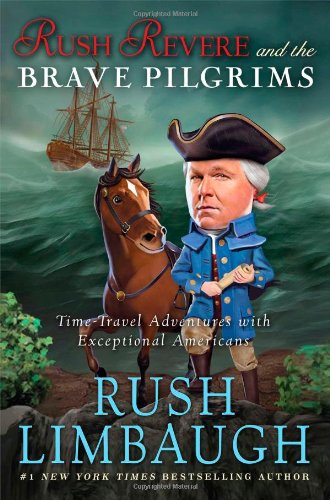 Rush Revere and the Brave Pilgrims

On the bright side, Rush Limbaugh has the illiteratti all up in arms. His two children’s books about the American Revolution and the founding of our nation is climbing to the top of the sales charts. He presents the truth about our history in a form that children—and adults, can understand. The libs are outraged.

The Children’s Book Council and its Every Child a Reader program released on Thursday their author-of-the-year finalists for their annual Children’s and Teen Choice Book Awards.

Limbaugh is one of the four finalists, and his nomination has prompted outrage on social media, given the host’s often-incendiary nature.

Limbaugh’s book is titled, “Rush Revere and The Brave Pilgrims: Time-Travel Adventures with Exceptional Americans” – a time-traveling tale of colonial America and the latest of two books in the “Rush Revere Series” published last year by Simon & Schuster.

Limbaugh, an outspoken figure in the political world, often expresses controversial sentiments on his radio program. Recently, Limbaugh blasted Pope Francis’ economic views as “pure Marxism,” and, in 2012, he called Georgetown law student Sandra Fluke a “slut” and “prostitute” for her support of women’s access to birth control.

The Children’s Book Council issued a public letter, posted to its website and Facebook page, defending its finalist selection process following the uproar online and insisting that the author of the year finalists “are determined solely based on titles’ performances on the bestseller lists.”

“Some of you have voiced concerns over the selection of finalists from bestseller lists, which you feel are potentially-manipulable indications of the success of a title. We can take this into consideration going forward, but cannot change our procedure for selecting finalists after the fact,” the organization said in the letter.

The CBC letter goes on to say the kids, who will start voting next week, ultimately decide which author wins in each of the six categories, including best author. The letter goes on to assure that the organization has a procedure in place to protect against fraud and adult’s voting in the contest.

“This program has never been about CBC or ECAR endorsing finalists,” the letter says.

Limbaugh touted the apparent success of his book series on his radio program on Thursday.

Limbaugh’s book landed at the number-5 spot on the New York Times best seller’s list for the week of March 23.

A movie is being released in a few days, Noah. According to the trailer, “It is inspired at the Book of Genesis.” The producers admit to taking “some artistic license.”  A lot of license. If you have seen some of the short trailers on TV, it looks like some fantasy horror movie.

Darren Aronofsky wrestles one of scripture’s most primal stories to the ground and extracts something vital and audacious, while also pushing some aggressive environmentalism, in Noah. Whereas for a century most Hollywood filmmakers have tread carefully and respectfully when tackling biblical topics in big-budget epics aimed at a mass audience, Aronofsky has been daring, digging deep to develop a bold interpretation of a tale which, in the original, offers a lot of room for speculation and invention. The narrative of the global flood that wiped out almost all earthly life is the original disaster story, one that’s embraced by most of the major world religions, which means that conservative and literal-minded elements of all faiths who make it their business to be offended by untraditional renditions of holy texts will find plenty to fulminate about here. Already banned in some Middle Eastern countries, Noah will rile some for the complete omission of the name “God” from the dialogue, others for its numerous dramatic fabrications and still more for its heavy-handed ecological doomsday messages, which unmistakably mark it as a product of its time. — The Hollywood Reporter.

When you compare Noah with Cecil B. DeMille’s classic, The Ten Commandments, or the more recent, Son of God by Roma Downey and her husband, Noah could not be further from the truth. It is so bad, even Islamists have banned it.

According to the column above, one of the most outrageous omissions in Noah, is not it’s “artistic license,” but its complete omission of God in the film.