It’s CPAC time again and the circus is on. Conservatives are throwing red meat to the attendees, the RINOs are attempting, and failing, to do the same. John Boehner had the good sense to not attend. He wasn’t invited and had no one who would invite him. McConnell on the other spoke before the audience, attempting to emulate Charlton Heston of old. 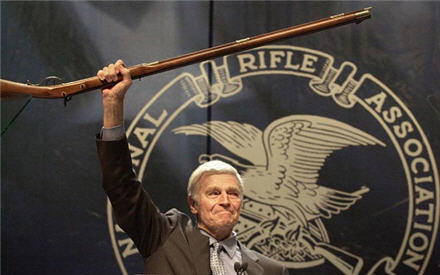 McConnell brought Senator Tom Coburn a flintlock Kentucky rifle. If McConnell thought that gesture would mollify 2nd Amendment advocates and conservatives overall, he was wrong. Besides, Heston did it better. 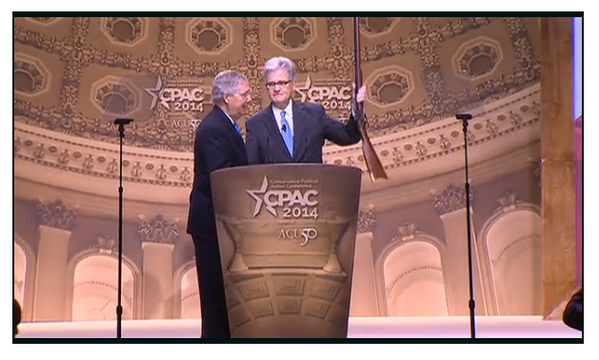 If you listen to the MSM, even FOX, CPAC revolved around Chris Christie. How wrong they are. Bloomberg reported the session, disparaging Perry, Cruz and others, but praising Christie.

Cruz and Christie offered a glimpse of possible party fights to come with speeches yesterday that highlighted differing approaches for the 2016 campaign.

Christie, 51, told his audience that the party needs to focus on figuring out how to win again, after losses to Democrat Barack Obama in the 2008 and 2012 presidential elections.

“We’ve got to start talking about what we’re for and not what we’re against,” he said. “Our ideas are better than their ideas, and that’s what we have to stand up for.” — Bloomberg.

Cruz, on the other hand, spoke against those failed tactics of former campaigns of Dole, McCain, and Romney.

Cruz, in his remarks, stressed the need for Republicans to clearly differentiate themselves from Democrats and ignore the advice of “D.C. consultants” who say “to not rock the boat.”

He pointed to the failed Republican presidential campaigns of former Senator Bob Dole in 1996, Senator John McCain of Arizona in 2008 and former Massachusetts Governor Mitt Romney in 2012 as examples not to follow.

Rick Perry, threw more red meat to the CPAC attendees. Cruz proposed abolishing the IRS. Perry continued on the theme of rebelling against the downhill slide into socialism and tyranny.

Texas governor Rick Perry broke through as a serious presidential hopeful Friday with a spirited speech to a cheering crowd at the Conservative Political Action Conference.

Perry brought the audience to its feet with a call to bring the successful conservative policies of red state governors to the national level.

Perry took jabs at targets including New York, California, and the Department of Education, noting that common-sense governance has been absent not only from blue states but from Washington, D.C.

“It’s time for a little rebellion on the battlefield of ideas,” the Texas governor said, paraphrasing Thomas Jefferson.

“We don’t have to accept recent history — we just need to change the presidency,” Perry continued. “We must elect the right kind of leaders to represent us to Washington.”

While left-leaning states face worsening economies, Perry pointed to the progress in Republican-led states such as South Carolina, Louisiana, Wisconsin, and Florida.

“Let’s take a red state. Shoot, let’s take Texas,” Perry said to cheers and laugher, before using his favorite U-Haul example: It costs more to rent a truck to go from San Francisco to Austin than vice versa.

A fired-up CPAC crowd cheered as Perry told them they deserved better than the Obama administration’s recent foreign-policy failures and ongoing economic woes. The longest-serving governor in Texas history even took a shot at the U.S. Postal Service: “Deliver the mail, do it on time and, heck, do it on Saturdays.”

“My fellow conservatives, the future of this nation is upon you — it belongs to you,” he shouted over roaring applause. — National Review.

CPAC ate the red meat and wanted more. I have no doubt they will receive more from Cruz, Perry and others. They want no pablum like that from McConnell and Christie.