Now for news from the war front: Al Franken, Socialist Party Senator from Minnesota, breaks with Obama: calls for delay of implementation of Obamacare until after the 2014 elections!

Yes, there’s a bit of hyperbole in that opening headline…but not all that much; I believe the name of the democrat party in Minnesota is, Social Democrats. Al Franken did break with Obama, as did 40 congressional democrats in an attempt to save their political futures.

Amid all the hoopla and hyperbole coming out of Washington saying the ‘Pubs are disintegrating, Joseph Curl, writing in the Washington Times, has a contrary opinion.

One story the mainstream media just loves: Republicans at war. The party’s splintered to shreds, torn beyond repair, cut in two, broken asunder.

They write it week after week. The House speaker loses a vote, boom, the Republican Party is ruptured. But guess what story they never write?

The Democratic Party is ripped to tatters. The fake lovefest that broke out after Hillary Rodham Clinton wandered off into the wilderness in June 2008 is over. She’s back, and so is her troublemaking husband (who last week advised President Obama to “honor” his commitment on keeping your health insurance — and he knows about honor).

More, no one is afraid of the party’s top cop. Nearly 40 Dems bailed on him to support the “Keep Your Health Plan Act of 2013” just a day after Bubba made his pronouncement. They weren’t worried in the least about fallout or retribution. They were busy saving their own skins — which meant breaking hard from the president.

Now, here’s the thing: Republicans, contrary to media reports, were never confused about Obamacare. Not one voted for the bill Mr. Obama signed into law in 2010. That means RINOs, lefty-middle righties, conservatives, tea partyers, moderates, even mavericks — the whole big tent — stood as one in opposition to a law they knew was insanity. No dissension there.

Meanwhile, on the other side, Blue Dog Democrats, moderate lefties, Reagan D’s — the middle left — had Obamacare shoved down their throats. They ate Obamacare because they had to: The party as a whole was moving left, hard, and they had one choice — go with them, or be left behind. So, they voted en masse for Obamacare.

But everything’s changing now, fast. At stake: In the short term, the makeup of the Senate. In the long term, much more: The future of liberalism.

The second half of the article continues at the website.

On the other hand, stories are emerging that hint about the breakup of Mitch McConnell and his supporters in the GOP. In a straw poll of the GOP on one country in Kentucky, McConnell lost the poll with Matt Bevin, his Tea Party opponent, 80% to 20%.

Matt Bevin Takes over 80% of Vote in Kentucky Straw Poll

Bevin, endorsed by the Tea Party, said that his upcoming primary battle with Senate Minority Leader Mitch McConnell (R-KY) is “not only a microcosm for the battle of the Republican party, but the entire political process.” The battle for limited government, the belief that government has a spending problem, distaste for crony capitalism, and a strong opposition to tax increases animates his campaign to be Senator.

Bevin served four years as an officer in the U.S. Army and rose to Captain of the 5th Mechanized Infantry Division Artillery’s counterfire office. Although he hails from humble beginnings, growing up in a small town in New Hampshire living in a small farmhouse house with a big family, Bevin proved to be a savvy business man and, according to Bannon, accumulated as much as $25 million.

Bannon thinks that the Kentucky senate race is one that will draw the attention of the entire nation for several reasons. One crucial reason is that McConnell has made a number of accusations that Bevin had committed improprieties while running a family manufacturing company which Bevin categorically denies. Also, McConnell has stirred the ire of the conservative grassroots by calling them “nothing but a bunch of bullies.” Moreover, Jeffrey Katzenberg, CEO of DreamWorks, has dumped several million in to Democrat challenger Alison Lundergan Grimes’ campaign, who as a result will be an immediate threat to whoever wins the republican primary.

Bevin and Bannon talked about the results of a recent straw poll that took place recently in Boone County Kentucky. Last Thursday, Bevin won a resounding victory over Mitch McConnell at a Boone County GOP straw poll of 700 Republicans garnering 80% of the votes.

Clearly, Matt Bevin may be able to pull off a victory come next November and unseat McConnell but he has a long way to go. McConnell raised over $9 million while Bevin has so far accumulated only $160,000. Bannon did point out though Bevin has a huge personal fortune to draw from if he wants to.

Add another story to this about McConnell’s attack on rank and file GOPers in Washington. The latest news is McConnell allies forced a book-keeper, SCF’s bookkeeper, Lisa Lisker, out of her job. The SCF is the Senate Conservative Fund who is supporting Matt Bevin, McConnell’s opponent in the upcoming Kentucky primary.

From promising young candidates to bookkeepers … that’s right, bookkeepers, Mitch McConnell appears to want to punch everyone in the nose, along with believing they work for him and no one else – let alone the people who elect them. 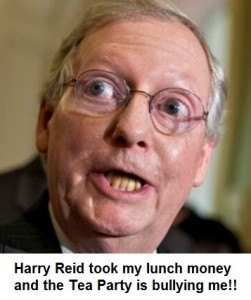 Here’s the latest via Collateral Damage in a GOP Civil War | National Review Online. McConnell is effectively out of touch with the GOP base and now routinely being owned by Harry Reid and the Democrats. Worse, all he seems capable of now is lashing out at his own side. These are only the latest in a growing series of events calling McConnell’s judgment into serious question. I do honestly think it’s time for this guy to go. We need new blood, not old bad blood born of an outdated view of the Senate.

The nation’s youngest university president Nebraska’s Midland University, Sasse has become the latest collateral damage in a GOP civil war between McConnell and Holmes, on the one side, and Matt Hoskins and Heritage Foundation president Jim DeMint, Hoskins’s political godfather.

By all accounts, Sasse — whom The Weekly Standard recently heralded as being able to bridge the divide between the GOP establishment and the Tea Party — never wanted a fight with McConnell. In 2013, however, it’s becoming clear that being Switzerland isn’t really an option.

Yes, McConnell must go, the sooner, the better.

Is nothing sacred? Stand up for real meaning of Thanksgiving, skip the shopping on Turkey Day

I was almost expecting it when the KMarts and Walmarts of the world announced their stores would be open this year on Thanksgiving night. Sigh. It seemed to reflect that good ol’ American over-the-top holiday consumerism which seems to creep up on us closer and closer to Labor Day every year.

But again, that’s the big boxes, the new stores on the block; the ones who HAVE to pull a stunt.

Now comes word that the department store synonymous with Thanksgiving and Christmas, indeed the legendary setting of the classic movie, “Miracle On 34th Street” is stepping into the fray…Macy’s is opening on Thanksgiving. Macy’s? Seriously? Is NOTHING sacred? Apologies for the cliché question, but I have an answer: No.

In America, nothing is sacred anymore.

It’s the “Broken Windows” theory of crime in the context of our culture, our values: if petty vandalism goes unchecked, not only does more vandalism occur, but an environment is created leading to more violent crimes which occur more frequently. Eventually society ends up an epidemic of crime and the commensurate breakdown in the quality of life.

In the case of stores opening on Thanksgiving, remember when there was ONE place in town open for a few hours on Thanksgiving morning where you could grab an emergency carton of milk?

Remember, how even that little store would be closed by 11am?

Remember how the ride to grandma’s felt like a post-apocalyptic journey through a ghost town?

Remember when someone told you that the big drugstore chain down the road was open til 3 on Thanksgiving?

Remember when the supermarket stuck with its normal hours?

Now we’re supposed to cheer when Macy’s opens on our formally sacred day of gratitude?

And what of the EMPLOYEES? What of our dear fellow Americans who are being plucked from the cozy confines of their homes on a holiday? The concept of working on Thanksgiving used to be nonsensical. EVERYBODY is supposed to be off on Thanksgiving!

This very well could be the beginning of the end of a beautiful day of reflection; a gathering of loved ones in a common moment of gratitude.

If we are not vigilant, the gathering, the meal, the fellowship could very well give way to a quick toast around the table and turkey sandwiches.

Now, here’s what I want you to do. Take a stand for tradition this Thanksgiving.

Don’t go shopping. Stay where you are when the meal is over and do what you’re SUPPOSED to do: Linger in the kitchen, pick at the pies, do the dishes, listen to the older ladies complain about their husbands, settle in front of the television with your cousins and reflect about holidays gone by.

Perhaps you’ll be blessed to enjoy the greatest Thanksgiving tradition of all…falling asleep on the couch to the dulcet sound of family and friends laughing in the background.

I know that sounds cheesey, but it’s not nearly as cheesey as the notion of leaving your family to go shopping on Thanksgiving.

2 thoughts on “The Third Day before Thanksgiving”