Today’s title will confuse some readers. Others will recognize it as we lead into today’s topic—the epidemic of random attacks by thugs on the unaware. For the last week, news items have appeared on the internet on the subject of ‘knock-out’, a game by thugs who attempt to knock out a random stranger with one blow and then steal whatever the victim has.

Drudge has a story today about such an attack in New York, where self-defense is not allowed. The fear is that this ‘game’ will spread.

The worrying ‘game’ is played by choosing victims at random and trying to knock them to the ground with one punch. More and more people report being victimized by its callous ‘players.’

This disturbing game is a hit with goons.

“Knockout” is an emerging trend among unhinged teens that consists of targeting a passerby at random and trying to lay them out with one punch.

Participants call this — the game’s singular move — the “one hitter quitter.”

Their victims can be anyone: elderly men or mothers with kids are not exempt. This poor attempt at manliness — i.e. thinly veiled cowardice — has even ended in death.

Most of the knockout incidents have taken place in the New York metro area.

New York-based CBS 2 shed light on the fisticuff fad earlier this month with a report on the twisted game in Jersey City.

“You just knock them out. You hit them with a blow and you take their belongings,” one teen told the station.

Another youngster said that people participate simply “for the fun of it.” But another said wannabe tough guys are interested in whether their friends actually have the strength to strike somebody down.

Phoebe Connolly, of Vermont, told ABC affiliate WJLA that she was targeted while riding her bike in the Columbia Heights section of Washington, D.C.

“My whole head went flying to the side… it was a hard punch,” Connolly said. “One kid came from the side and pretty much cut me off. He threw a hook with his left hand and got me right in the face and he said, ‘Wapow!'”

The column continues with reports of fatalities, one in St. Louis, MO. The next question is why were these people so unaware of their surroundings and how could these thugs get so close and surprise their victims? I would guess it is due to the mindset, “It can’t happen to me!”

That brings us to the two conditions in today’s title. One condition is applicable to everyone. You needn’t be armed, just aware of your surroundings, being aware who is near you and to be prepared to take action, run, if you have no other options, if necessary.

Jeff Cooper was a prolific writer on gun and self-defense issues. He, along with others at the time, created principles of defense, of being prepared. His conditions were color codes, from White, being completely unaware, to red, fight!

The most important means of surviving a lethal confrontation, according to Cooper, is neither the weapon nor the martial skills. The primary tool is the combat mindset, set forth in his book, Principles of Personal Defense.[5]

The color code, as originally introduced by Jeff Cooper, had nothing to do with tactical situations or alertness levels, but rather with one’s state of mind. As taught by Cooper, it relates to the degree of peril you are willing to do something about and which allows you to move from one level of mindset to another to enable you to properly handle a given situation. Cooper did not claim to have invented anything in particular with the color code, but he was apparently the first to use it as an indication of mental state.[6]

Cooper’s Condition Red is the condition of last resort. Your life is in danger. You must do whatever is necessary to survive. If you are armed, that is one means of defending yourself. If you are unarmed, you must use whatever is available, whether it is a rock lying nearby on the ground, a discarded pipe or piece of wood, or, if nothing is available, yourself.

The other condition, Condition One, pertains to firearms and CCW carriers. It is useless to acquire a CCW permit, to carry a weapon, and be completely unaware of your surroundings. What use is a personal weapon if you are attacked while in Condition White? 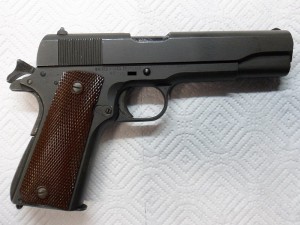 Cooper developed codes for CCW carriers and others who carry weapons daily, law and security officers, for instance. The rules were developed with the 1911 .45acp single-action pistol in mind. The photo is of a 1911A1 .45acp pistol in Condition One, Cocked and Locked—hammer is cocked, safety is on—is locked.

Cooper favored the Colt M1911 and its variants. There are several conditions of readiness in which such a weapon can be carried. Cooper promulgated most of the following terms:

Some of these configurations are safer than others, while others are quicker to fire the gun (Condition 1). In the interest of consistent training, most agencies that issue the 1911 specify the condition in which it is to be carried as a matter of local doctrine.

This firearm condition system can also be used to refer to other firearm actions, particularly when illustrating the differences between carry modes considered to be safe for various actions. For example, DA/SA is designed to be carried in Condition 2, which is not safe for 1911s without firing pin safeties. — Wikipedia.

If you possess a CCW permit and you carry (I know many who have a CCW permit but don’t carry. They acquired the permit because they could, as a political statement,) be aware and be prepared.

Are you aware of your surroundings when parking and leaving your car? Do you make a 360° scan around you? I do. Do you examine everyone coming towards you? I do. Are you aware of people approaching from your rear? I do. Do you constantly look around you when walking outside, or in a mall? I do. When inside or at a restaurant, do you sit where you have a good view of the room, of the entrance, do you sit where it is unlikely you can be approached from behind? I do whenever possible.

My wife now knows, when we go out, to sit where I can watch my surroundings. Sometimes it is difficult, sometimes not. More than once, while being seated, I’ve asked for a different table or booth to allow me a better view of the room.

I’ve had a CCW permit since they first became legal in Missouri. I’ve drawn my pistol once, while walking in a park and was charged by a dog running loose. I didn’t have to aim, nor shoot. The dog stopped when I didn’t run. He moved off and I reholstered while catching my breath. I don’t think I breathed until the dog was thirty yards away.

One time, in an underground parking lot in Kansas City, I may have been targeted by a group of teenagers, a gang, really. I was walking to my car when a half-dozen teen boys approached, yelling, asking for some change. I didn’t have cover, nor an exit. I turned towards them, put my hand in my pocket and said, “No, fresh out.” When I didn’t run, but instead just stood there, watching them with my hand, unseen, on my pistol butt, they decided to go elsewhere. I’m not sure what they expected, but I didn’t fit their profile, apparently.

I was in Condition Yellow, but I was still caught in a position that limited my options, I had no place to run, couldn’t really with my arthritic knees and being overweight, no place to hide where they couldn’t get at me. Sometimes, in the best of situations, your options were limited.

With the spread of the ‘knock-out’ game, we all must be aware of our surroundings, who are near us. In the end, your self-defense is still yourself. No cop will be there, guarding you. They have no legal obligation to protect you as an individual—that has been decided several times by the US Supreme Court. No, all the cops can do is clean up the mess afterward and attempt to find and arrest the attackers…not that that will do you, the victim, much good.

The saying, “When seconds count, the cops are minutes away!” applies. You are your own self-defense. Be aware, be prepared. After all is over, be that one who returns alive and unharmed to your family.