(Note: I had this post in queue for Wednesday, April 14th. Now, as I listen to Rush Limbaugh, I’m hearing him speak about the same article. Oh well. I’ll post anyway.)

I’ve written before about the myth that FDR ended the Great Depression. That theme is a mantra with the democrat party and it’s a part of their core belief that anything can be fixed with more money (taxes) and government control (statism.) I’ve disparaged that theory before and now a new report comes from Hillsdale College that supports my earlier postings.

From the Wall Street Journal…

Did FDR End the Depression?

The economy took off after the postwar Congress cut taxes

‘He got us out of the Great Depression.” That’s probably the most frequent comment made about President Fran 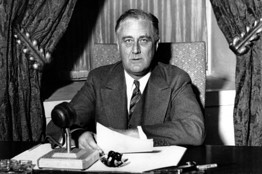 klin Roosevelt, who died 65 years ago today. Every Democratic president from Truman to Obama has believed it, and each has used FDR’s New Deal as a model for expanding the government.

It’s a myth. FDR did not get us out of the Great Depression—not during the 1930s, and only in a limited sense during World War II.

Let’s start with the New Deal. Its various alphabet-soup agencies—the WPA, AAA, NRA and even the TVA (Tennessee Valley Authority)—failed to create sustainable jobs. In May 1939, U.S. unemployment still exceeded 20%. European countries, according to a League of Nations survey, averaged only about 12% in 1938. The New Deal, by forcing taxes up and discouraging entrepreneurs from investing, probably did more harm than good.

What about World War II? We need to understand that the near-full employment during the conflict was temporary. Ten million to 12 million soldiers overseas and another 10 million to 15 million people making tanks, bullets and war materiel do not a lasting recovery make. The country essentially traded temporary jobs for a skyrocketing national debt. Many of those jobs had little or no value after the war.

No one knew this more than FDR himself. His key advisers were frantic at the possibility of the Great Depression’s return when the war ended and the soldiers came home. The president believed a New Deal revival was the answer—and on Oct. 28, 1944, about six months before his death, he spelled out his vision for a postwar America. It included government-subsidized housing, federal involvement in health care, more TVA projects, and the “right to a useful and remunerative job” provided by the federal government if necessary.

Roosevelt died before the war ended and before he could implement his New Deal revival. His successor, Harry Truman, in a 16,000 word message on Sept. 6, 1945, urged Congress to enact FDR’s ideas as the best way to achieve full employment after the war.

Congress—both chambers with Democratic majorities—responded by just saying “no.” No to the whole New Deal revival: no federal program for health care, no full-employment act, only limited federal housing, and no increase in minimum wage or Social Security benefits.

Instead, Congress reduced taxes. Income tax rates were cut across the board. FDR’s top marginal rate, 94% on all income over $200,000, was cut to 86.45%. The lowest rate was cut to 19% from 23%, and with a change in the amount of income exempt from taxation an estimated 12 million Americans were eliminated from the tax rolls entirely.

Georgia Sen. Walter George, chairman of the Senate Finance Committee, defended the Revenue Act of 1945 with arguments that today we would call “supply-side economics.” If the tax bill “has the effect which it is hoped it will have,” George said, “it will so stimulate the expansion of business as to bring in a greater total revenue.”

He was prophetic. By the late 1940s, a revived economy was generating more annual federal revenue than the U.S. had received during the war years, when tax rates were higher. Price controls from the war were also eliminated by the end of 1946. The U.S. began running budget surpluses.

Congress substituted the tonic of freedom for FDR’s New Deal revival and the American economy recovered well. Unemployment, which had been in double digits throughout the 1930s, was only 3.9% in 1946 and, except for a couple of short recessions, remained in that range for the next decade.

The Great Depression was over, no thanks to FDR. Yet the myth of his New Deal lives on. With the current effort by President Obama to emulate some of FDR’s programs to get us out of the recent deep recession, this myth should be laid to rest.

2 thoughts on “Did FDR end the Great Depression?”