The government has been shut down for a day now and what’s happened. Obama ordered barricades erected around the WW II and other memorials around DC to prevent WW II vets from making a pilgrimage to their memorials. Yesterday, those vets moved the barricades aside and toured their memorial regardless of the threats of arrest from government peons.

Today, they plan on visiting the Lincoln memorial. Already, government employees are hard at work erecting barricades around it as well. 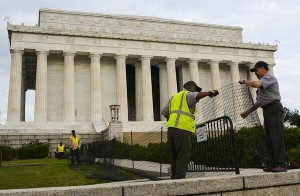 There is no reason for these memorials to be barricaded. They are in the open. If the concern is about trash and trash pickup, I’d bet there are plenty of civic organizations willing to step in and keep the memorials clean.

No, the only reason for this is spite. Spite by Obama against those who won’t support his socialist agenda and spite against anyone who may, at some time, oppose him.

If the administration and democrats really want to enrage the nation, all they have to do is to arrest these 90-year old veterans. Many are in wheelchairs and in fragile health. If one of them dies as a result of the mishandling by government goons, I have no doubt, many more, veterans and non-veterans, will be marching to Washington. I saw a passing notice that the Oathkeepers are mobilizing to help these veterans overcome their obstacles.

There are some others who are protesting the shutdown. Who are they? Union government workers, sitting on their butts on the curb holding signs. For many, this is the same activity they do while on the government payroll. 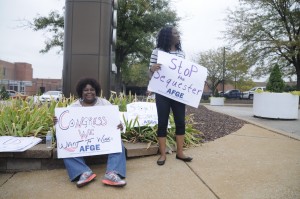 We only have to look at the ‘non-essential’ percentages to see the waste in government. Ninety-five percent of the IRS, Department of Education, the EPA, Department of the Interior, and many more departments and agencies have massive ‘unessential’ number of employees. I expect, if the shutdown continues, some of these will be declared essential…to satisfy the unions if for nothing else.

In the meantime, Harry Reid and House democrats continue blocking every proposal. Fund the military—blocked, remove the Obamacare subsidies for Congress—blocked, fund individual agencies like the Border Patrol—blocked. The democrats can’t blame the ‘Pubs for this shutdown. It has been carefully orchestrated by Reid and Obama.

So, as I write this, what is the headline on Drudge?

Honor Flight of Northwest Ohio has a trip scheduled to depart from Toledo next Wednesday, October 9.

“We will make the call this Friday to determine if the flight is still a go, or if we will have to re-schedule,” Armstrong explains.

He says they are considering going ahead with the trip even if the government is still on shutdown, but when he called the parks service, he was told they would face arrest. “I said, are you kidding me? You’re going to arrest a 90/91-year-old veteran from seeing his memorial? If it wasn’t for them it wouldn’t be there. She said, ‘That’s correct sir.'”

When Armstrong asked for her name, he says she did not give it to him and then promptly hung up the phone.