I don’t usually listen to internet radio. All too many programs are hosted by…well, let’s just say their light bulbs aren’t screwed in very tightly. The subject of the programs are spread from one extreme to the other, left and right, liberal and conservative, communist to anarchist.

I happened to listen to one for a few minutes the other day. The premise of the subject was that the United States is inherently racist because when it was first adopted, only white, male, property owners could vote!

Contrary to the popular myth espoused by many, voting requirements were never written into the Constitution, it was left to the individual states to determine requirements for suffrage, the right to vote. Many argued in the years prior to the creation of the Constitution to put limitations on the right to vote. One of the most famous, because it supported the property-owning myth, was from Alexander Hamilton.

“If it were probable that every man would give his vote freely, and without influence of any kind, then, upon the true theory and genuine principles of liberty, every member of the community, however poor, should have a vote… But since that can hardly be expected, in persons of indigent fortunes, or such as are under the immediate dominion of others, all popular states have been obliged to establish certain qualifications, whereby, some who are suspected to have no will of their own, are excluded from voting; in order to set other individuals, whose wills may be supposed independent, more thoroughly upon a level with each other.”

Some states, like New York, imposed voting and qualification limitations similar to that proposed by Hamilton.

…the 1777 New York State Constitution required that a man have considerable wealth to be able to vote for the state Assembly – he had to pay taxes as well as own property worth at least 20 pounds or pay an annual rent of 2 pounds. Ten of the original 13 states had property and/or tax requirements when the U.S. Constitution came into effect. — City University of New York.

Why did these early founders think property ownership was so important to gain suffrage? In the words of today, “it insured that they, the voters, had skin in the game.“

I don’t propose that we return to that standard for suffrage. But…think of the changes in government if we did. For one, I strongly doubt our welfare system would exist. And, the balance of power would shift from cities and urban areas to rural. Property ownership would rise…or would it?  It’s something to think about. 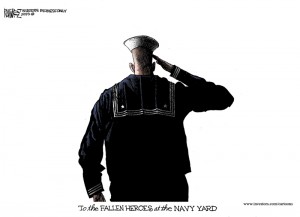 Why was the Washington Navy Yard, most military bases in fact, undefended? By the order of one man: William Jefferson Clinton.

Military bases used to be guarded by the military. When I was in the Air Force some time ago, USAF Security Police manned guard posts at all entrances. They also policed the base, just like many of the neighboring police departments, and had roving patrols of the perimeter to guard against infiltrators. SAC bases were more stringent in their precautions.

McNamara, when he was Kennedy’s and Johnson’s Secretary of Defense, proposed replacing those guards with civilian employees. The four Chiefs of Staff, the CS of the Army, Air Force, the CNO of the Navy and the Commandant of the Marines, went to Johnson and threatened to resign enmass if McNamara continued with his plan.  Johnson stopped McNamara. I never heard this in the news but it was well known in the services. Unfortunately, it was the last instance, that I know of, of interdepartmental cooperation and unity between the services.

Security: As the usual suspects call for stricter gun control, the fact remains that a gunman with two prior gun-crime arrests entered a secure military facility with a stolen ID and found no one able to shoot back.

It was Fort Hood all over again. Aaron Alexis, a gunman whose prior behavioral warning signs were ignored, opens fire in an installation belonging to the most powerful military on Earth and those who protect our nation and design our weapons are not allowed to have a weapon to defend themselves.

He was more equipped than the 12 people he killed on the base who were not permitted to carry weapons on the base, thanks to former President Bill Clinton.

In 1993 the president issued orders that barred members of the military and their civilian contractors from carrying personal firearms on base. Even officers were disarmed under the law.

Almost as soon as Clinton assumed office, in March 1993 the Army imposed regulations forbidding military personnel from carrying their personal firearms and making it almost impossible for commanders to issue firearms to soldiers in the U.S. for personal protection.

That ban extends to virtually all U.S military bases and related installations.

Under the ruling enacted by the Clinton administration, there must be “a credible and specific threat against personnel” before military personnel “may be authorized to carry firearms for personal protection.”

This was the reason that the Fort Hood shooter Maj. Nidal Malik Hasan was able to go on a rampage for a full 10 minutes in 2009 without being stopped.

This is why, at Fort Hood, home of the heavily armed and feared 1st Cavalry Division, a civilian policewoman from off base was the one whose marksmanship ended Hasan’s terrorist rampage, to this day obscenely called “workplace violence,” denying survivors and the dead medals and benefits.

The liberal reaction to the Navy Yard massacre mirrors the reaction, after Fort Hood, of Paul Helmke, president of the Brady Campaign to Prevent Gun Violence.

He opined, “This latest tragedy, at a heavily fortified army base, ought to convince more Americans to reject the argument that the solution to gun violence is to arm more people with more guns in more places.” What?

On Monday night, anchor John Roberts asked Mandy Foster, the wife of one of the soldiers shot at Fort Hood, how she felt about her husband’s upcoming deployment to Afghanistan. She responded: “At least he’s safe there and he can fire back, right?” Safer than at the Washington Navy Yard or Fort Hood.

The article continues at the website. It’s a good read and places the blame for making our military installations a target of choice for terrorists, the disgruntled, and the insane, squarely where it should—the Executive Branch of the federal government.

Bush isn’t blameless, here. he could have rescinded Clinton’s order. He did not.

Let’s also note that the Navy Yard Shooter, was a liberal and an Obama supporter. He was NOT a Bible thumping, bitter-clinging, gun-loving, white american. He was none of the popular stereotypes so loved by the state media when they blame conservatives for the nation’s ills.