Usually, on Fridays, I choose a number of topics to discuss. This Friday is no exception. We have examples of betrayal, constitutional violations, political lies at all levels, a nation stumbling into chaos, a chaos created, abetted and supported by liberal politics and agendas.

Let’s discuss betrayal. John Boehner has ruled that the House will not oppose Obamacare and will kowtow to democrats when the next Continuing Resolution arrives in a couple of months. Why is this democrat operative still Speaker of the House? He should be removed. Immediately.

Boehner cares not about the welfare of the country. His primary interest is supporting the Ruling Class, to remain a Washington insider. The only way to accomplish that goal is to rollover for every democrat initiative that arrives in Congress. How does he remain in Congress? He’s in a safe, democrat, district. It’s the democrats and the RINO local central committees that keep him in office.

Conservatives are planning on a primary opponent against Boehner but they’ll have to fight both the Ohio ‘Pubs as well as cross-over democrats. Whomever is Boehner’s primary opponent, I’ll send him, or her, a few bucks.

At some point, rank-and-file conservative activists will have to confront an inconvenient reality.  The Republicans in Washington are not just dumb or spineless – they are the problem.  They don’t share our values and seek to undermine our beliefs.  The only way that will change is if we return the favor and thwart their political careers.

Earlier this evening, Speaker John Boehner announced his grand plans for fighting Obamacare in the budget.  He will pass a short-term continuing resolution (CR) until some time in December, grouping the new budget deadline with the debt ceiling date, and create another grand end-of-year fiscal cliff.  He will fund Obamacare in the short term CR, but by George, he will fight like hell in the debt ceiling battle!  For now, they will make the short term CR about locking in the sequester cuts.

Here are some points to ponder:

We were then promised that the real show would begin in September when they fight for the new Ryan budget for FY 2012.  They punted until the end of the year, ultimately passing a massive omnibus bill, which funded Obamacare, vitiated the Ryan budget, and violated every tenet of the GOP Pledge to America.  In 2012, they caved on funding Obamacare in the FY 2013 CR, punting it to March 2013 under the pretense that we would win the election and have even more leverage.  Then they caved on the McConnell tax increases at year’s end, noting that the default position was against us.  But, the contended, wait until the debt ceiling when the default position is no debt limit increase, and we will have more leverage.

That sentiment changed quickly when leadership brought down a number of phony pollsters to the annual retreat at Williamsburg, warning members of Armageddon if they fight on the debt ceiling.  So they cleverly “suspended” the debt ceiling at the end of January, promising to first fight on the CR in March, and locking the sequester and pass a better budget that would balance in ten years.  Then, they would head into the next debt ceiling fight unified behind that path to balance, which defunded Obamacare.

A number of conservatives signed onto the “Williamsburg Accord” with the promise of a better budget than the previous year.  Leadership rearranged the deck and used the fiscal cliff and Obamacare tax increases, along with new unrealistic CBO projections of revenue to repackage the exact same budget from the previous year.  Conservatives had voted for Obamacare all for a false promise and the sequester cuts that were already locked in by default.

Now they are, once again, punting on the CR for the debt ceiling!!!

Red State can get a bit raw at times. In this case, however, they are right on target.

The “blue” states, those bastions of the democrat party and their liberal, tax, tax, tax, spend, spend, spend agenda is losing money and population. People are voting with their feet and it that can’t be done, they’re sending their money out of state to locales where they won’t be constantly robbed by state governments.

Map: The mass exodus of taxpayers from New York, California

New York and California may be the worst tax offenders, but Michigan, Illinois and Ohio aren’t far behind: 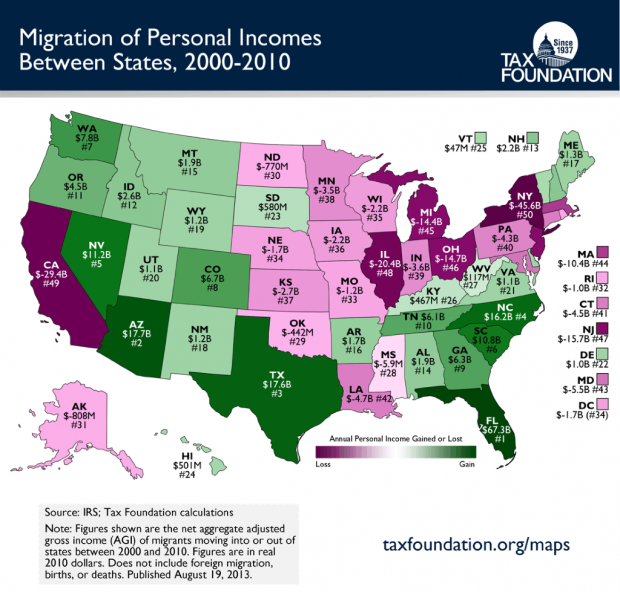 A new report from the national Tax Foundation examines the exodus of taxpayers from these states… as well as the transfer of these tax dollars to states like Texas, Arizona and Florida:

This week, our Monday Map draws data from our interactive State Migration Calculator, and illustrates the interstate movement of income over the past decade (from 2000 to 2010). When a person moves to a new state, their income is added to the total of all other incomes in that state. This positively affects the total taxable income in his or her new state, and negatively affects the income in the state he or she left. […]

Note, too, that Missouri, like those Blue States, is in the negative category (light purple) instead of gaining income and population.

The libs crow about Separation of Church and State, ignoring that no such provision exists in the Constitution. That said, there is a TON of case law that supports the concept. What IS in the Constitution is the prohibition of the federal government or “prohibiting the free exercise thereof.” There is, too, case law that extends that federal prohibition to the states…except New Mexico’s Supreme Court appears to be ignorant of that prohibition.

Earlier today, the Supreme Court of New Mexico ruled that the First Amendment does not protect a Christian photographer’s ability to decline to take pictures of a same-sex commitment ceremony—even when doing so would violate the photographer’s deeply held religious beliefs. As Elaine Huguenin, owner of Elane Photography, explained: “The message a same-sex commitment ceremony communicates is not one I believe.”

But New Mexico’s highest court, deciding an appeal of the case, today agreed with the New Mexico Human Rights Commission and ruled against Elane Photography, concluding that neither protections of free speech nor free exercise of religion apply.

Elaine and her husband Jon, both committed Christians, run their small photography business in Albuquerque, N.M. In 2006, she declined the request to photograph a same-sex commitment ceremony. In 2008, the New Mexico Human Rights Commission ruled that by declining to use its artistic and expressive skills to communicate what was said and what occurred at the ceremony, the business had engaged in illegal discrimination based on sexual orientation.

The commission ruled this way based on New Mexico’s human rights law, which prohibits discrimination in public accommodations (“any establishment that provides or offers its services … or goods to the public”) based on race, religion and sexual orientation—among other protected classes.

Elane Photography didn’t refuse to take pictures of gays and lesbians, but only of such a same-sex ceremony, based on the owners’ belief that marriage is a union of a man and a woman. New Mexico law agrees, as it has no legal same-sex civil unions or same-sex marriages. Additionally, there were other photographers in the Albuquerque area who could have photographed the ceremony.

Today’s decision highlights the increasing concern many have that anti-discrimination laws and same-sex marriage run roughshod over the rights of conscience and religious liberty. Thomas Messner, a visiting fellow at The Heritage Foundation, has documented multiple instances in which laws forbidding discrimination based on sexual orientation, as well as laws redefining marriage, already have eroded religious liberty and the rights of conscience. Indeed, earlier this year, the United States Commission on Civil Rights held an entire hearing on conflicts between nondiscrimination policies and civil liberties such as religious freedom.

In a growing number of incidents, government hasn’t respected the beliefs of Americans. Citizens must insist that government not discriminate against those who hold to the historic definition of marriage. Policy should prohibit the government—or anyone who receives taxpayers’ dollars—from discriminating in employment, licensing, accreditation or contracting against those who believe marriage is the union of a man and a woman.

So much for religious freedom in the United States. You only have the freedom that government says you have.