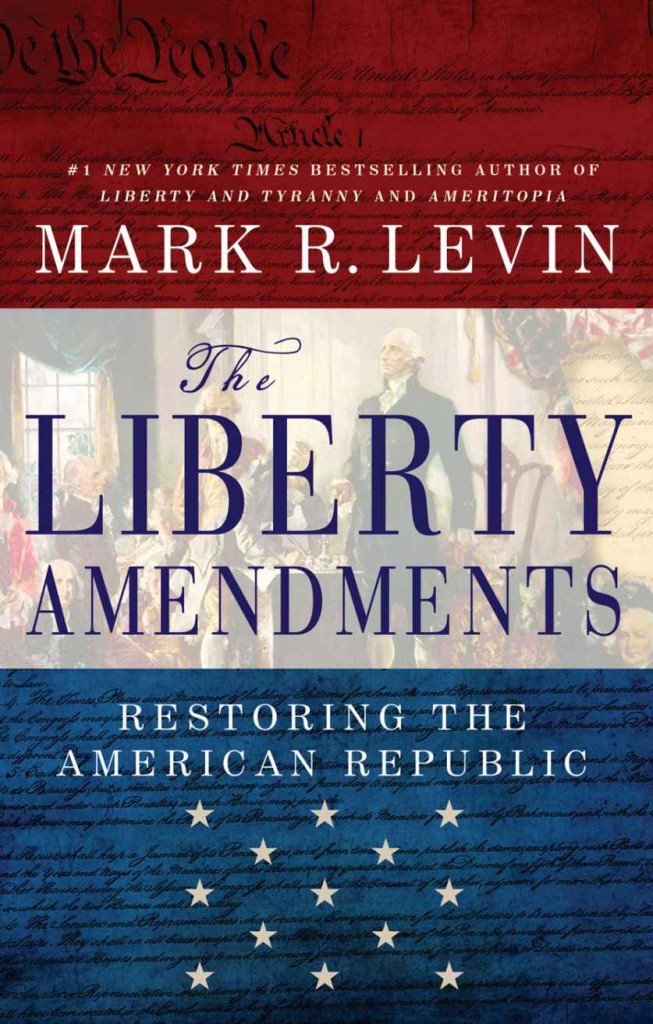 Mark Levin’s new book, The Liberty Amendments, is getting a lot of press since its release earlier this week. It rose to #1 on the Amazon best seller list on its first day.

According to Levin, the book is how to restore the Constitution using means already available within the Constitution. Brent Bozell and Cal Thomas have written articles on the book as shown below.

A constitutional cure for what ails us

Much of government’s dysfunction, cost and overreach can be traced to the abandonment of the constitutional boundaries the Founders put in place for the purpose of controlling the lust for power.

In his new book, “The Liberty Amendments: Restoring the American Republic,” Mark R. Levin asserts the U.S. government isn’t performing up to standards established by the Founders because, like a flooding river, politicians have breached their constitutional limits.

Levin, who graduated with honors and a law degree from Temple University and who hosts a popular syndicated radio talk show, believes “the nation has entered an age of post-constitutional tyranny” resulting in this attitude by our leaders: “The public is not to be informed but indoctrinated, manipulated and misled.”

Before this is dismissed as the ranting of a far-right extremist, consider the case Levin builds: The executive branch has assumed for itself “broad lawmaking power,” creating departments and agencies that contravene the doctrine known as separation of powers; Congress creates monstrosities like Obamacare that have no constitutional origin, spending the country into record debt and making America dependent on foreign governments, especially China; the judiciary consists of men and women who are “no more virtuous than the rest of us and in some cases less so, as they suffer from the usual human imperfections and frailties.”

And yet they make decisions in the name of the Constitution that cannot be defended according to the words of the Founders, who believed the judiciary should be the least powerful and consequential branch of government.

In Federalist No. 78, Alexander Hamilton wrote that the judiciary branch would be the weakest of the three because it had “no influence over either the sword or the purse. … It may truly be said to have neither FORCE nor WILL, but merely judgment.”

Who can credibly disagree with Levin when he writes: “What was to be a relatively innocuous federal government, operating from a defined enumeration of specific grants of power, has become an ever-present and unaccountable force. It is the nation’s largest creditor, debtor, lender, employer, consumer, contractor, grantor, property owner, tenant, insurer, health-care provider and pension guarantor.”

To return America to its constitutional boundaries, Levin proposes a series of “liberty amendments” to the Constitution, beginning with one limiting the terms of congressmen so they might avoid the bipartisan virus that infects even some who believe in limited government, mutating them into power-hungry influence seekers with little regard for the public good.

Another amendment would establish term limits for Supreme Court justices. “The point is,” argues Levin, “that the Framers clearly intended to create intrinsic limitations on the ability of any one branch or level of government to have unanswered authority over the other.”

Another amendment would establish spending limits for the government. Another would grant states the authority to check Congress.

Levin admits these amendments are unlikely to win congressional approval because in Washington power is not willingly relinquished. That’s why he proposes the states bypass Congress, as the Framers provided, and pass these amendments themselves.

As Levin notes, “Article V [of the Constitution] expressly grants state legislatures significant authority to rebalance the constitutional structure for the purpose of restoring our founding principles should the federal government shed its limitations, abandon its original purpose and grow too powerful, as many delegates in Philadelphia and the state conventions had worried it might.”

Americans who care about the health and future of their country have the power through the states to force the federal government to abide by its founding document. Mark Levin’s book is a serious work that can serve as an action plan for curing what ails us.

What’s needed is less focus on Washington and more on state capitals where legislators are more likely to be responsive to the demands of “we the people.”

The other review appeared on Investor’s Business Daily by Brent Bozell.

Only those happily trampling on the last vestiges of freedom will deny that our federal government as a constitutional republic has ceased to function.

The president can no longer control (nor does this one want to control) the enormous and ever-expanding bureaucracy functioning as a government by fiat.

The legislative branch, so corrupted, so drunk by the allure of power, so disdainful of its constituents, is unable to stop its bankrupting ways.

The judiciary is perhaps worst. The Supreme Court is openly rejecting the authority of the Constitution itself.

If the federal government refuses to adhere to the enumerated powers of the Constitution, what can the citizenry do about it? The events of the past five years (more, actually) prove this.

It has become virtually impossible to stop the agenda of a radical chief executive who brazenly uses the federal government as his personal political machine. It is almost impossible to defeat an incumbent in Congress with all the advantages it has awarded itself. For all intents it’s impossible to replace a member of the Supreme Court.

The left is content with this terrible turn of events. By “transformation” they meant the transfer of power to the state.

Conservatives are loath to declare American exceptionalism dead, yet are powerless to stop the statist steamroller. With every cycle, the situation worsens. At some point the unthinkable — tyranny — is upon us. We are running out of time. Only radical surgery will save the patient now.

Enter Dr. Mark Levin with his new book, “The Liberty Amendments: Restoring the American Republic.” Levin is a Constitutional scholar — and he shines.

He argues passionately that the federal government can be brought under control only if new limitations are thrust upon it by its citizenry. He proposes a Constitutional convention, not one called by Congress but by two-thirds of state legislatures. It would require a three-fourths margin to pass any amendment. It is the lesser known of the two options provided by Article V of the Constitution.

What should a Constitutional convention tackle? Levin offers 11 amendments for consideration, with appropriate subdivisions, each carefully researched and designed to reduce the power of the state.

Levin calls for other limitations on Congress.

Who would have thought such amendments would be needed? That’s the point. It’s the nature of the crisis.

Levin quotes Tocqueville reflections on the first Constitutional Convention: “(I)t is new in history of society to see a great people turn a calm and scrutinizing eye upon itself when apprised by the legislature that the wheels of its government are stopped.”

It is time for our legislatures once more to issue the clarion call.

Some critics will dismiss the idea. But nothing else is working, and nothing else will do. We have reached the tipping point.

Levin, on his radio show (locally KCMO-710 at 5pm weekdays), jumped the gun on the book’s release. He began talking about some of the concepts late last week with some tantalizing hints.

If you have ever read Levin’s bio, you’ll quickly see he knows government—from the inside and well as the outside. His Landmark Legal Foundation is currently suing the EPA over violations of law and their own regulations.

Levin wants the states to apply pressure to the central government. He outlines means and methods for them to do so. I don’t have a copy yet, but I’m looking forward to reading this latest Levin book.