The kickoff of the big ground operation in Afghanistan is in the news now. Here’s a excerpt from one who is there and in a position to report truthfully.

The Battle for Marjah
by babatim on February 12th, 2010

Operation Moshtarak, the assault on the Marjah District in the Helmand Province started today. The press has been looking at it for months from various angles with stories stressing that secrecy has been lost, or that civilians will be killed, or with speculation on why the military is publicizing Operation Moshtarak in the first place. These stories all contain grains of truth but none of them is even close to telling the real story. Here it is: when the Marines crossed the line of departure today, the battle for Marjah had already been won. 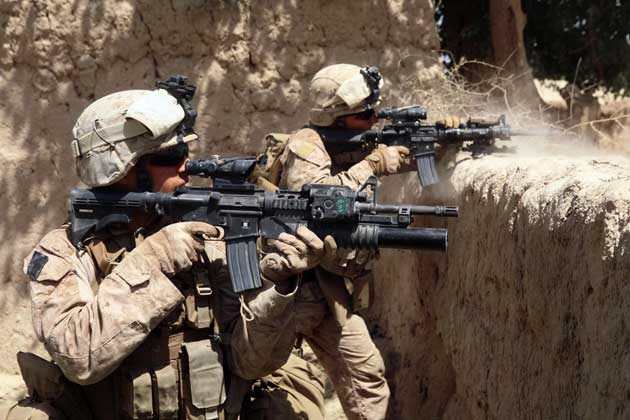 The battle has started and despite the fact that there is still hard fighting ahead, it is, for all intents and purposes, already over. Photo by David Guttenfelder

That is not to say there will be no fighting – there will be – pockets of Taliban will need to be cleared out along with a ton of IED’s. Just as they did last summer in Now Zad the Marines spent months talking about what they were going do in Marjah while focusing their efforts at shaping the fight behind the scene. Like a master magician General Nicholson mesmerized the press with flashy hand movements to draw attention away from what was important. The press spent focused on the less important aspects of the coming fight. Just like a magic show the action occurred right in front of the press in plain view yet remained out of sight.

The magic show analogy is most appropriate for the 2nd Marine Expeditionary Brigade (2nd MEB) because they have many balls up in the air which have to be managed. They are working under a NATO chain of command with allies who can add little to the fight and managing those relationships while a distraction and tedious is important. Their success has won them the dubious honor of hosting multiple junkets from our political masters, which is also tedious and boring, but important. They have the international press who need to be managed and hopefully used to advantage focusing on them like a laser beam. And they have the various other US Gov agencies to work with and that task takes time, personnel, and attention from senior commanders- commodities that are always in short supply. They have a lot of balls in the air simultaneously and like an expert juggler they are making it look easy.

You can read the rest of the post here.