The title of today’s post is attributed to Napoleon Bonaparte when, following orders of the revolutionary convention in 1795, he used cannon and grapeshot to clear the narrow streets of Paris and ended a Royalist insurrection.  The tactic has been used several times—once, during the riots in Paris in 1848 and again, in 1863, to end the draft riots in New York City.

Today’s American Thinker e-newsletter has two articles concerning civil insurrection, the weaknesses of government and portents of revolution. The articles struck a cord because they mirror my own concerns and observations.

One article concerns the riots in Stockholm, Sweden.  There, the constabulary stood aside and didn’t intervene—until counter attacks occurred by those defending their lives and property. 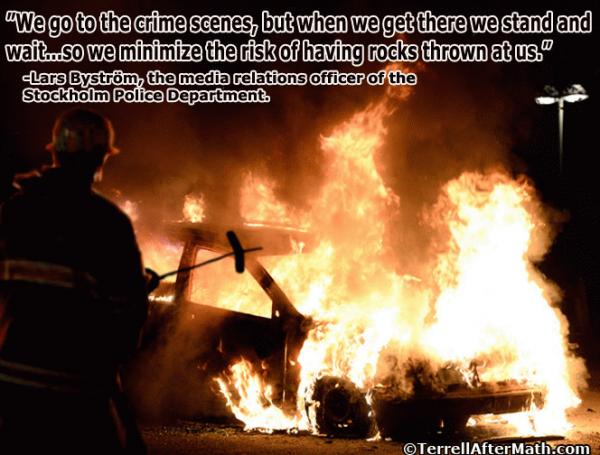 Then the constabulary intervened—not against the original rioters but against those defending their homes, lives and property.

After a few nights of “youth” riots in Sweden, the ordinary Swedes had had enough. So they took to the streets to protect their property. Fortunately the police knew just what to do. They attacked the “vigilantes.”

You can see the logic of that for our modern liberal ruling class. It’s one thing for youths to riot in their welfare ghettos. Nothing much you can do about that except search for root causes and implement midnight basketball programs.

But when the crypto-fascists in the middle class start a sensible and practical effort to defend themselves from mayhem, that’s different. There is no excuse for taking the law into your own hands.

Nobody in the ruling class is telling the rioters that their behavior will be stopped and their rebellion crushed by any means necessary. That would be racist, or classist, or anti-religious bigotry. No, the ruling class immediately clamped down on the ordinary people that were responding to the age-old problem that when seconds count the police are minutes away.

The article is long and meanders a bit but it is an indictment against socialist government that has become too steeped in its own rhetoric. I urge you to follow this link and read the entire column.

The second article hits closer to home. The theme of it can be isolated with this single sentence. “Most regimes began to fall when they lose legitimacy.”

The reference is toward the Czarist Regime before the 1917 revolution in Russia. The statement, taken alone, applies to many regimes from the that of Louis VIII to our own, each suffering purposeful, liberal mismanagement.

The thoughts of regime failure engage me because of what I see as a continual separation of elites from ordinary people in Western democracies.  There are many facets in our own polity where this occurs, from the economic meltdown laced with fraud and greed, for which no executive has been held accountable, to the current administration’s seizure of the institutions of government to harass and hinder legitimate political opposition, to make journalism a crime, and to apparently  lie about it with impunity, as the attorney general appears to have  in the case of James Rosen. — The American Thinker.

The loss of legitimacy can occur not only by what the government does, but also by what it does not. The column continues with these observations.

…I am more concerned about Western regimes denying the fundamental internal threat to security — the rise in our midst of radical Islam and the refusal to grapple with it.  There are the recent bombings at the Boston Marathon, the beheading of a Lee Rigby on the streets of Woolwich, in broad daylight; a similar attack in France where the perpetrator prayed before he stabbed a French soldier in the throat, the Muslim riots in Sweden, still ongoing as of this writing, similar to riots in France, and the creation of Sharia no-go areas in Amsterdam and London.

Throughout each of these episodes and earlier ones going back to 09/11, the public is told that this has nothing to do with Islam.  We are told that the massacre at Fort Hood by a Muslim fanatic is workplace violence, that an Afghan Muslim who drove from his neighborhood in Fremont, California some forty miles through heavy urban traffic to run people down near San Francisco’s Jewish Community Center was simply a deranged individual, that the shooting by an Egyptian Muslim of the El Al ticket counter at LAX had nothing to do with Islam, and neither did the shootings by a Muslim at the Jewish Federation in Seattle.

It is that last sentence that affects us more…that the government has deserted us. Our immediate security concerns is not just Islamic infiltration but includes our open borders and the refusal of government to enforce existing immigration law.

The essence of low intensity conflict is to make a people feel that the government, corrupt, inefficient, and inattentive, cannot protect the people. Guerrilla warriors go to great lengths to create this message, but in the Western world, the government itself is formulating this message at the expense of its own credibility and ultimately its legitimacy.

When British Prime Minister David Cameron says that the beheading of a British soldier is an insult to Islam, when the police stand by in Stockholm while Muslim youth burn cars, and when President Barack Obama tells us that the Fort Hood massacre was an example of workplace violence, the inadvertent messages they send is that they are more concerned about protecting Islam than protecting everyone else.  And the mixture of silence and euphemism with which a compliant media advances these ideas only reinforces public cynicism.

In each of these actions, the government tarnishes and diminishes its own legitimacy. In doing so, it paves the way for an alternative political narrative, one that will say: the truth is what you are not being told; the truth is what is obvious to you but hidden from the public agenda by corrupt elites who will not protect you from the next act of violence perpetrated by radical Muslims.

Amid such perceptions, social movements arise outside of the political mainstream.  Fear is the appropriate motivator and hate is the great unifier. The two reinforce each other.  If the mainstream political system is unraveling, the consequence of that interaction is an alternative political reality, an alternative more credible explanation of events and, most of all, a more credible interpretation of the otherwise inexplicable behavior of elites.

Revolutions are not made by those who desire them, but — as  Tocqueville notes — by the stupidity of those who least want them to occur. — The American Thinker.

The column concludes with this paragraph. It addresses “Western Democracies” as a whole. Taken out-of-context, it can apply equally to our situation here in the US.

The legitimacy of mature democracies is strong, but it is not unbreakable. Whether those who view themselves on the periphery will be mobilized is ultimately not up to those willing to go into the streets, but up to those who control the levers of power.  Regimes blunder into revolution.  It remains to be seen what course Western democracies follow in confronting the challenges presented by the Islamists.

We still, here in the US, have time and means to alter, or at least defer, this drift towards revolution—if we choose. We must also be aware that our foes are not just liberals and the democrat party but includes the entire establishment entrenched in Washington and in the states of both parties.