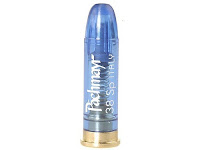 I gave some bad advice to a friend the other day. We had been to the range and he was trying out a revolver a friend had for sale. He wasn’t used to a stiff double-action trigger and I suggested that he use some snapcaps and practice a slow trigger pull. That would serve two purposes. First, it would get him used to the revolver’s trigger and hammer break. Second, it would help smooth out the trigger and sear to make the pull less rough.

I suggested that he use some fired brass as temporary snap caps. That was a BAD IDEA. After he left, I began to consider what I’d said. From a cylinder view, the only difference from live cartridges and fired ones are the dimpled primers. If you are in a hurry (aren’t we all at some time or another) it would be easy to mistake an unfired primer from a fired primer. The next occurance would be a ND. Not cool!

So, I changed my suggestion. If he uses fired cartridges as a snapcap, I told him to color the base—the primer end with a marker. Color it some bright, easily seen color to instantly show that no live ammo is in the cylinder. I used to do that when I was shooting IDPA. It identified my brass from all the others and kept the brass-hogs away. The same technique can be used to identify a fire brass the next time you want to practice and don’t have any snapcaps on hand.