Some Presidents have violated the Bill of Rights. Lincoln suspended Habeas Corpus during the Civil War. Roosevelt did likewise and more during World War II. The FBI, under Hoover and later Directors, has spied on American and violated numerous civil rights as well. All those examples of pass behavior and their acceptance at the time, does NOT make it right nor in many cases, legal.

The Constitution, in the 1st Amendment, provides for the freedom to assemble—to gather in groups to express political grievances. Freedom of movement, the right to travel about at will without restriction, is not in the Constitution although it was in the Articles of Confederation, Article 4. Freedom of Movement was not included in the Constitution because the authors felt it wasn’t needed but was a fundamental right recognized by all.

As early as the Articles of Confederation the Congress recognized freedom of movement (Article 4), though the right was thought to be so fundamental during the drafting of the Constitution as not needing explicit enumeration.[4] — Wiki

The US Constitution provided for Freedom of Travel between states via the Privileges and Immunities Clause. However, the authority to regulate that travel was granted to the states rather than the Federal Government. Travel within the states was deemed to be a state issue according to several SCOTUS decisions.

The result of this ambiguity is Boston on April 19, 2013. The rights of the people to assemble, to move about, to openly travel for whatever reason, is limited, according to law. Whatever government grants, the government can take away. We saw this last week in Boston. People were ordered to return to their homes and to remain there. Those who ventured outside risked being detained, restrained at gunpoint as the photos below testify.

However, the Constitution, in the 4th Amendment, does say that people have the right to be secure in their homes. That right can only be suspended by a search warrant showing probable cause and to state specifically what is expected to be found.

The government forces in Boston did not acquire search warrants. One spokesman said there weren’t sufficient judges available and since they were in “hot pursuit” (four days later!?), a warrant wasn’t required. People were evicted from their homes, at gun point and without warrants—a violation of the 4th Amendment. 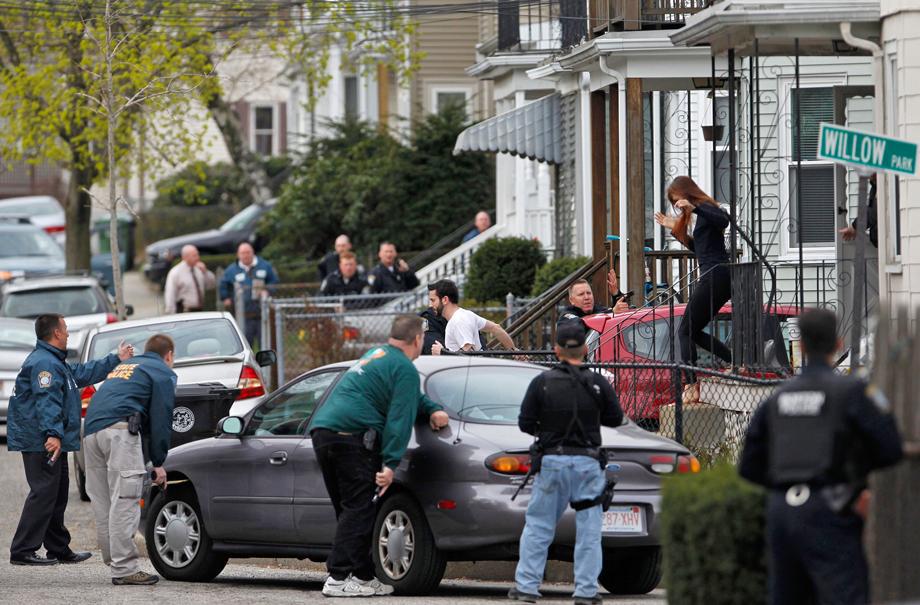 The tragedy of these acts is that the people of Boston accepted this violation of their rights. Some of us laughingly call Massachusetts as a “People’s Republic”, a reminiscence of the Communist governments of East Europe.

Welcome to the new “progressive” disunited states where the government decides what rights, if any, you may have. Mayor Bloomberg made this statement.

Mayor Bloomberg: Interpretation of U.S. Constitution Will ‘Have to Change’ Following Boston Bombings

New York City Mayor Michael Bloomberg believes that the Boston Marathon bombings have created a unique scenario — one in which traditional interpretations of the U.S. Constitution must change. Rather than shying away from cameras and other security mechanisms that some view as infringements upon individual privacy, the politician claims that the most recent attack calls for a new paradigm.

As for those who fear government intrusion and express serious concerns about how these technologies and other policies could impede privacy, Bloomberg is sympathetic — but only to a point.

As the Observer’s Politicker notes, Bloomberg also invoked gun control while making his point about the Constitution and security. In connecting what he said is the Supreme Court’s recognition that there are some interpretations of the Second Amendment that give way to “reasonable gun laws,” the mayor said that the nation will also need to “live with reasonable levels of security.”

1 thought on “A Pitful Example of Citizen Apathy”