Yesterday was a full day. It was raining like an upended bucket when we left the house at 6:30am. Visibility could be measured in feet—not yards.

We picked up a friend and headed out on US-50 to Jeff City. It rained all the way—heavy, heavy, rain for the first 40 miles. I was concerned with hydro-planing and made sure I followed in the tracks of a large truck a hundred yards or so ahead of me.

It’s a 2 1/2 hour drive, for us, to Jeff City. That is, when it’s in good weather. We parked about three blocks away from the Capitol and walked, uphill—a steep hill, to arrive in the Capitol’s Rotunda right a starting time. We were able to find seats but not together.

Did I say it was crowded? When the rally started, it was standing room only. The two upper observation levels that surrounded the Rotunda was ringed, shoulder-to-shoulder, as well.

I sat on the second row in one seat next to some friends. Shiela Stokes-Begley, the President of the Western Missouri Shooters Alliance, was one of the speakers. I sat next to her hubby, Dennis. Mrs. Crucis and our friend found two seats together further back. I’m not good as estimating the size of crowds. My best guess is that several hundred people were there. The photo above was taken before the rally started. It was MUCH more crowded after the start.

Mark Perez organized the event. Beth “Ann”, from CSC Radio, was the MC. 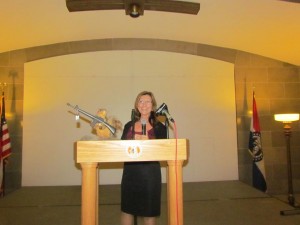 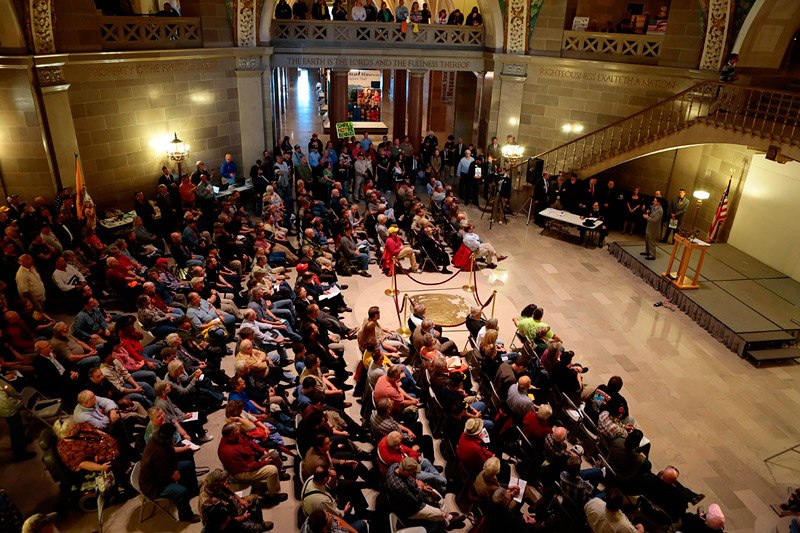 While the Rally progressed, MO state Representatives and Senators arrived, spoke briefly and left. Both Houses were in session. A bill, a consolidation of a number of gun rights bills, was being voted upon—it eventually passed by a large margin. However, there’s always a however, democrats were doing their best to delay the inevitable. One dem rep, who has proposed a bill to confiscate guns in Missouri, was speaking against the bills. It was a blatant attempt to delay the vote.

JEFFERSON CITY, Mo. (AP) — Several hundred gun-rights advocates rallied at the state Capitol on Thursday as the Missouri House passed a bill that would greatly expand who can legally carry a weapon and allow certain school personnel to carry concealed weapons on school grounds.

The House lived up to the energetic crowd’s expectations shortly after the rally ended by passing one of the largest expansions of gun rights since the Legislature passed a law allowing concealed weapons in 2003. The measure sponsored by Republican Rep. Doug Funderburk would allow appointed school “protection officers” to carry concealed weapons, as long as they have a valid permit and register with the state Department of Public Safety.The bill was passed with a 115-41 vote, one day after a small group of U.S. Senate Democrats from rural states joined with Republicans to reject more extensive background checks for gun purchasers and proposed bans on assault weapons and high-capacity ammunition magazines.

“This is too big of a country to have a one size fits all approach,” said Spellman, who works in the financial services industry.The Missouri House measure would also declare federal gun laws to be unenforceable within the state’s borders, a component that Democrats chided as unconstitutional. Rep. Chris Kelly, D-Columbia, said the bill won’t be enforced but “to do so would be literally secession” from the United States.
…

Missouri law currently allows concealed guns to be carried by people age 21 and older who haven’t been convicted of a felony or deemed mentally incompetent, and who pass a firearms training course and background check. But the House legislation would lower the age requirement and allow people age 19 to apply for a permit. The measure also allows concealed weapon permit holders to openly carry firearms that are less than 16 inches long.Rally-goer Debbie Dickson said she supports the minimum age reduction for concealed weapons permits. She said it was the role of parents, not the government, to educate about guns and safety.

The bill also includes a provision that would prohibit health professionals from being required to ask people about firearm ownership or documenting it in medical records.While gun control proposals at the federal level may have prompted the House legislation, Republican lawmakers are also looking to ease privacy concerns within the state. Republicans are concerned about a new Revenue Department procedure that scans personal documents of license applicants to be kept on state computers and have criticized the Highway Patrol for providing data on concealed gun permit holders to a federal Social Security fraud investigator.”I don’t want any private records to be spread when everyone can see them,” Dickson said.The bill would also make it illegal to publish any identifying information about a gun owner or a person applying for a permit to own or carry a firearm. A person or entity publishing such information would be guilty of a class A misdemeanor.

We arrived home, after making a few stops along the way, about 8:30pm. The cats were happy to see us. One had barfed on the carpet in the family room, a joy of living with cats. Mrs. Crucis spent some time catching up on her e-mails and surfed a bit. Me? I crashed.

A long day, but one well spent.