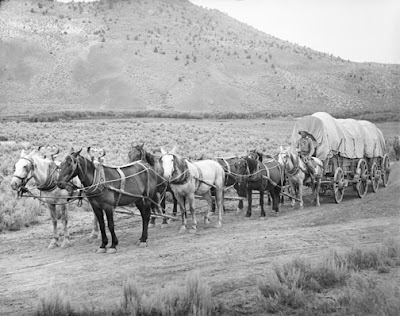 I haven’t written any family history in some time. That was the original purpose of this blog but I sorta…went down another path.

Here’s a family story about my Dad’s family and how they crossed the plains in a covered wagon. The crucial difference was they traveled from west to east after fleeing for their lives out of Colorado.

My Dad’s family immigrated to the United States in 1904 arriving through Ellis Island in New York harbor. Dad was two years old at the time.

Grandpa had spent a number of years in the US in the previous decade. He and some cousins from Grandma’s side of the family arrived in the early 1890’s and developed a gold mine in Cripple Creek, CO. It took some time to develop the mine but when it was paying enough, Grandpa went back to England to bring the families to Colorado.

Condensation of history here. When the families arrived at Cripple Creek, the cousins who stayed had disappeared and the current owner of the gold mine was John D. Rockefeller. There wasn’t too much that could be done to dispute ownership of the mine. Rockefeller had money, lawyers, banks and lawmen. Grandpa didn’t.

Being low on funds, most of the families moved to Pennsylvania where other relatives were located, but Grandpa and some others stayed in Colorado. That was 1905. Now, flash forward to 1913. With mining skills learned in the mines of England, Scotland and Wales, the family is now near Trinidad, CO. The mining conditions were horrible and the miners had banded together under the banner of the United Mine Workers of America and were on strike. Grandpa and the others were union members and when the strike began, they were ousted from their homes in Trinidad and moved to the tent city at Ludlow, Colorado.

Ludlow tent colony rebuilt on the ruins of the old. C. May 1914. Courtesy Joseph “Moose” Martinez.

By April of 1914, both sides of the strike had become entrenched. Rockefeller had enough and he was able to get the Governor of Colorado to send in the state militia to break up the strike. This led to what was later known as the Ludlow Massacre. Another tent city had been razed a month earlier and everyone expected Ludlow to be next. Fortunately for the family (and me), Dad and some of his friends were in the mountains around the camp hunting and saw the militia installing machine guns on a ridge above the camp. They ran back to their families with the news.

Grandpa informed the strike leadership about the machine guns but they ignored him because they’d been promised by the governor that the militia was there to keep the miners separate from Rockefeller’s strike-breakers.

“Water Tank Hill Sgt. Davis at gun”
Photographer: Stuart Mace
Courtesy Denver Public Library.
One of several photographs showing the Colorado Militia posing with the light machine guns that raked the Ludlow Tent colony on April 20, 1914. It is unknown whether the photo was taken before or after the attack. The men in civilian clothes are probably company guards.

During that night, Grandpa and the family crept out of camp along with several other families and started east across the plains. The next day, the remaining strikers confronted the militia in a series of gun battles that ended with the militia firing on the tent city with the machine guns they had sited the previous day.

Dad’s family along with the other refugees were tracked for several days by a small group of strike-breakers. Dad called them night-riders. They stayed a few miles away from the cluster of covered wagon and when dark arrived would ride through the camp shooting. This running gun battle continued until several of the night-riders had been killed or wounded. Dad didn’t mention any casualties on the refugees side but I expect some must have been wounded during this time. The various families broke up when they reached Kansas City. Grandpa and his family continued on to Illinois where they finally settled in Benton, another coal mining town.

I always thought of Dad being a pioneer whenever he told this story. It wasn’t until much later that I read more about Ludlow and I realized that the family were really refugees rather than pioneers.

2 thoughts on “Refugees from Ludlow”