It will be 40 years  next month since I got out of the Air Force. So many little items have been lost over the years—my insignia, ribbons, uniforms. I think my old field jacket lasted longest until I “outgrew” it.

My boots were the first to be lost. I was one of a lucky few who were issued jump boots instead of the usual lace-up 12″ boots. I remember looking for them when a deep snow fell a few years after leaving the Air Force. We had moved at least once, maybe twice at that point. The boots were well broken in. Perhaps I should have worn them more often. If so, maybe they would never have been lost. I have no idea whatever happened to them. 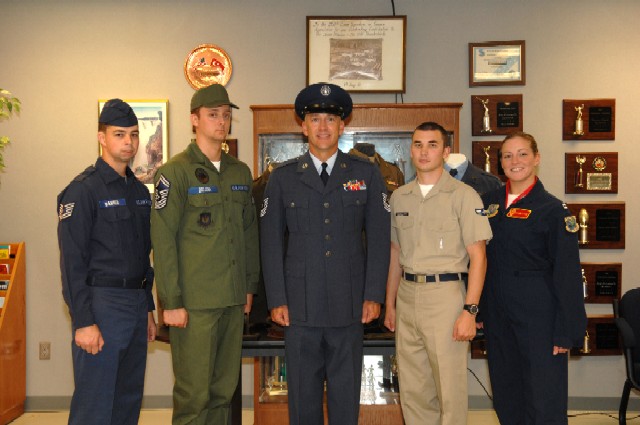 The Air Force numbered their uniforms. When I first entered, the 1505 tan uniform was universal for summer wear. The blue uniform was darker, shade 1545. We were called bus drivers due to the similarity with the Greyhound bus uniform.

(I’m not in either of the photos in this post. They are just examples of the uniforms.)

There were optional items and alternatives available through the local BX and the local sales store; a light-weight 1545 dark blue short jacket, or a dark-blue 1545 long sleeved shirt that could be substituted for the usual long blue winter tunic.

A few years later, the 1505 tan summer uniform was replaced by light-weight/tropical weight dark blue worsted trousers and light blue short-sleeved shirt. No one grieved at the loss of the cotton 1505s. They were a pain. Both the shirt and trousers had to be heavily starched and wrinkled within a few minutes of being worn. It wasn’t uncommon at some bases to require a change of uniforms several times a day because the 1505s would not remain fresh. The new blue summer uniform was a mixture of wool and synthetic material and much easier to keep fresh-looking. It wore well although being a bit warmer than the 1505s.

I’m not sure how many iterations of uniform changes have occurred in forty years. Several without a doubt. I owned some “tailored” fatigue uniforms including some unauthorized short sleeved fatigues. Mine were solid green. The camo versions were for South-east Asia locations only. Now the digital camo is in vogue even for the Navy! (Why is camo needed aboard ship!?)

It’s been a long time. I’m going to look to see if I can find my dog tags once again.