I wrote a post last week about my old grade school principal, Mr. Helfritch. I couldn’t remember his first name when I wrote that piece.  Since then a few more memories have risen.  I now remember adults called him “Fritz.” I still don’t know if that was his real first name or a nick-name.

He was the principal during my first three grades. When I was in the fourth grade, he took a job at a slightly bigger school in Coello, IL. We still saw him from time to time when our two schools played softball and basketball against each other. He moved on some years later and I never heard from him again.

After the incident I reported last week, Mr Helfritch joined us boys in some of our “after-school” activities—like squirrel hunting. The “rules” of squirrel hunting at our school, in fact pretty much the norm in our area, was to hunt squirrels with a .22 rifle. Shotguns were universally frowned upon. Only city-slickers, those who came down from Chicago, used shotguns to hurt squirrels. 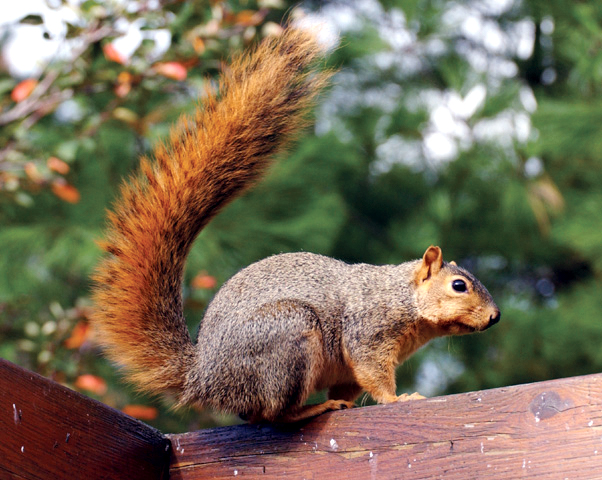 Squirrel season was broad then, from mid-September until late October when rabbit season started. During hunting season, a bunch of us would bring our .22 rifles to school with a few cartridges. Dad never let me bring more than six at a time. He said if I couldn’t hit a squirrel with six shots, more wouldn’t help.

We stored our rifles in the corner of our school-room with the actions open. We weren’t allowed to hunt during school hours, but as soon as school was over, we would collect our rifles and troop off into the woodlot adjacent to the school.  That five-acre woodlot was filled with acorn, pecan and hickory trees. Perfect for squirrels—grey ones and the larger red fox squirrels.

One day, Mr. Helfritch asked if he could join us hunting after school. I don’t think anyone had the nerve to say, “No.” After school, Mr. Helfritch disappeared into his office. A few moments later he appeared wearing jeans, a dark shirt, his old army boots and a denim jacket. Gone were his usual sport-coat, white shirt and tie. Instead of a .22 rifle, he had a revolver strapped to his belt…a Smith & Wesson .22 revolver with an eight-inch barrel. It was the longest barreled pistol I’d ever seen.

Off we went into the woodlot. The method we used for squirrel hunting was to find an appropriate nut tree, lay down on the ground quietly and wait for the squirrels to emerge. The first to see one would whisper, “Mine,” and he would take the shot. Usually, there was only one chance to shoot. It the hunter missed, which was easy to do in those heavily branched trees, the squirrels would scatter and hide until they thought it was safe to emerge once again.

Our usual score was two to three squirrels in an hour. We rarely hunted longer. We had missed the bus and we would have to walk and arrive home before dark. In late October, that didn’t leave much time for hunting. It took me slightly over an hour to walk the 3 1/2 miles home.

We let Mr. Helfritch have the first shot that day. We were anxious to see how well he’d do with only a pistol. We lay there for around fifteen minutes when the squirrels began to emerge. Mr. Helfritch had chosen a large hickory tree that was home to a number of fox squirrels.

One of those fox squirrels began to run along the upper branches of the tree. Mr. Helfritch whispered, “Mine,” and raised his pistol. The squirrels froze for a moment at the sudden movement. Mr. Helfritch waited…waited…POW!

We could hear the squirrel stampede through the branches. The revolver was much louder than our rifles. We usually hunted with .22 shorts. They were cheaper. Mr. Helfrich, however, used .22 long rifle cartridges. A small difference perhaps but still much louder out of an 8″ barrel.

We could also hear something dropping down through the leaves until it thumped a few feet away. A very nice, red squirrel. Mr. Helfritch rose, walked over to the squirrel and picked it up. “That’s enough for me, boys,” he said and walked off towards the school.

The next day we all talked about hunting with Mr. Helfritch. Of course, the tree grew larger, the squirrel higher and bigger. It was the nature of hunting. Mr. Helfritch joined us a few more times that fall but those expeditions were never as grand as that first time.

A few years later I acquired a Harrington & Richards .22 revolver and from that time forward never hunted squirrels with a rifle. I didn’t bring home as many squirrels as I did with a rifle. It was more exciting that way.