Obama’s minions have been in “secret” talks with the GOP congressional leadership on how to divert our approach to the fiscal cliff. What the White House wanted and what they offered in return made McConnell laugh out loud.

Obama wanted more taxes, no commitment to any spending cuts (unless it was to the military), and authority to raise the debt limit at will—no Congressional approval required! Quoting Dave Ramsey, that would be giving a drunk a drink.

White House ‘Cliff’ Offer to Boehner a ‘Break from Reality’

Speaker John Boehner, R-Ohio, on Thursday rejected a White House plan to avert the so-called fiscal cliff at year’s end that would generate nearly $1.6 trillion in new tax revenue over the next decade and require Republicans to allow Congress to relinquish its control over the nation’s statutory borrowing limits.

“A complete break from reality,” is how the plan, delivered to Boehner and other congressional leaders by Treasury Secretary Timothy Geithner at their Capitol offices, was described by a congressional Republican aide familiar with what was proposed. President Obama’s liaison to Congress, Rob Nabors, also was at the meetings.

Yes, your read that first paragraph correctly. Obama wants congress to give him complete authority to spend and borrow without regard to the debt limit—in short, there would be no debt limit other than what our creditors were willing to give us. It would be a fiscal disaster.

We need to keep the pressure on McConnell and Boehner to reject Obama’s offers. Obama will never cut spending regardless of any agreements. He has done that many times before. Obama lies. Democrats lie. They will never honor any agreement except when it is what they want.

The real danger is that McConnell and Boehner will revert to their normal spinelessness and roll over again. We must make the establishment GOP more afraid of us than they are of the dems.

Speaking of the fiscal cliff, more and more analysts and pundits are saying, “Do nothing.” According to them, the fiscal cliff is a myth created by the 2011 Budget Control Act. Boehner and McConnell sold the GOP a bill of mythical goods and allowed Obama and the dems to defraud the country. That act was limited to only discretionary spending—35% of the national budget while doing nothing to the big entitlement ticket items.

The GOP establishment is really afraid of being accused of shutting down the government if they don’t cave once again. Get real! The media and the dems will make those accusations anyway! Expect the demagoguery.

The government has been shutdown before and the world didn’t end. A year or so ago a blizzard hit the east coast including Washington. Most of the rank and file government employees were told to stay home. Only the “essential” workers had to report to work. That makes it easy where to cut. Cut those who didn’t have to go in to work, keep those who did have to report for work.

Everyone in Washington fears the fiscal cliff. The White House has no interest in going over. Democrats understand they’ll never have more power than they do now. Delaying a budget deal until after January means getting less of what they want.

Republican leaders, meanwhile, live in fear of another 1995 government shutdown. When two sides fail to reach a deal, the media blame Republicans. That’s the lesson Republicans learned 17 years ago. They shudder imagining the headlines if negotiations were to break down next month: “Norquist-controlled GOP forces America off cliff.” Nothing terrifies them more than that. They’ll do anything to avoid it, as Obama knows well. (Hence his advantage.) — The Daily Caller.

Krauthammer urged the ‘Pubs to stand their ground as well.

Krauthammer urged Republicans to take the short-term hit on the fiscal cliff, and said eventually Obama would be held accountable for the consequences. — The Daily Caller.

Krauthammer declared that Obama’s demands were worse than those given to Lee at Appomattox and Lee had just lost a war.

“It’s not just a bad deal — this is really an insulting deal,” Krauthammer said. “What Geithner offered, what you showed on the screen, Robert E. Lee was offered easier terms at Appomattox, and he lost the Civil War. The Democrats won by three percent of the vote, and they did not hold the House

. Republicans won the House. So this is not exactly unconditional surrender, but that is what the administration is asking of the Republicans.”

“This idea — there are not only no cuts in this, there’s an increase in spending with a new stimulus,” Krauthammer continued. “I mean, this is almost unheard of. I mean, what do they expect? They obviously expect the Republicans will cave on everything. I think the Republicans ought to simply walk away. The president is the president. He’s the leader. They are demanding that the Republicans explain all the cuts that they want to make.” — The Daily Caller.

Continuing on today’s theme, I’ll leave you with this parting thought from Michael Ramirez. 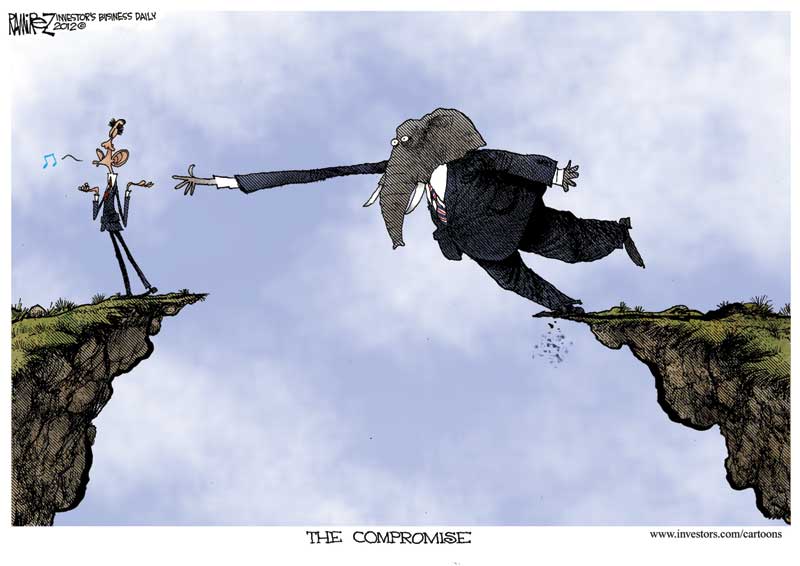