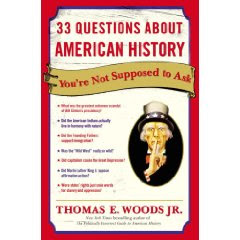 This report is titled, “Who is Most Responsible for the Imperial Presidency?”

It doesn’t take a rocket scientist to see that the federal government has been growing more and more dictatorial and powerful throughout the 20th and now the 21st centuries. Some people resist that growth as a matter of principal regardless which party is in office. Most, however, only do so when their party is out of power.

A recent example is the passage of the “Patriot Act during the Bush administration. The democrat members voted for the act enthusiastically at the time. However within months, they acquired collective amnesia and howled to the heavens about the breach of privacy and the intrusion of the federal government into private communications.

But, where did this growth in statist power begin? And, what mechanism was mainly used to accomplish the task? Woods has done extensive research and has discovered that the use of the Executive Order is the culprit.

What is an Execute Order? An Executive Order is a directive to those departments of the Executive branch of government. Initially, it was the act of implementing legislation passed by Congress. However, in some cases, Orders were written that were not supported by preceding acts of Congress. During the early years of our republic, those orders were submitted to Congress requesting concurrence, i.e., ex post facto Congressional approval of the Executive Order. Throughout the 18th and 19th centuries, Presidents were extremely reluctant to issue an Executive Order being cognizant that Congress could subsequently reverse and not approve the order. This trend continued through the Civil War until the presidency of Teddy Roosevelt.

It was TR who pioneered rule by executive order as a governing style among American chief executives. Many Americans rightly howled during the 1990s when Clinton aid Paul Begala famously said of executive orders, “Stroke of the pen, law of the land. Kinda cool.” But Clinton, who once called Theodore Roosevelt his favorite Republican president, was only exercising a power that TR had made a major feature of the presidential office early in the century.
…
To appreciate the transformation that occurred in American government under TR, consider the number of executive orders issued by the presidents of the late 19th century. Presidents Hayes and Garfield issued none. Arthur issued 3, Grover Cleveland (first term) 6, Benjamin Harrison 4, Cleveland (second term) 71, McKinley 51. TR issued 1,006.

“…examples of the abuse of execute orders are plentiful as well. As early as 1793 the subject led to a confrontation between Congress and the president. George Washington declared the United States neutral in the wars of the French Revolution, a move some viewed as an abuse of power, given the lack of statutory authority or constitutional prerogative. Ultimately Congress ratified the president’s decision.”
…
An another example of TR’s use of executive orders was his intervention in the United Mine Workers strike in 1902, ordering the mine owners to agree to arbitration. Should they instead remain obstinate, he threatened to order the army to take over and operate the coal mines. Well known is TR’s outburst when told that the Constitution did not permit the confiscation of private property: “To hell with the Constitution when the people want coal!” Less well known is that at one point TR summoned General John M. Schofield, instructing him: “I bid you pay no heed to any other authority, no heed to a writ from a judge, or anything else excepting my commands.” He was to stand ready, at TR’s command, to seize the mines from the operators and run them for the government.

The Myth: The modern presidency is a wonderful institution that has been mysteriously abused by recent occupants of the White House.

The Truth: Presidential lawlessness goes back a long way—at least to Theodore Roosevelt, whom everyone is taught to love and revere.

TRs view of the presidency has continued to this day. Woodrow Wilson, commenting after the 4-way election of 1912 described the presidency in terms TR could understand.

* “The nation as a whole has chosen him (the president), and is conscious that it has no other political spokesman. His is the only national voice in affairs. Let him once win the admiration and confidence of the country, and no other single force can withstand him, no combination of forces will easily overpower him. His position takes the imagination of the country. He is the representative of no constituency, but of the whole people.”
…
The president, said Wilson, is “at liberty, both in law and conscience to be as big a man as he can.”

The seizure of General Motors and Chrysler is a current example of presidential dictatorial acts. The democrats pushed through the TARP act unread. An act so vague that it can be interpreted to mean whatever the reader desires. Using this as his authority, Obama and Geitner first mis-lead the companies about their responsibilities to the term of the loans, then used the Act as authority to impose outragous demands on the companies to the extent of forcing the leadership, the CEOs and Boards of Directors, to resign allowing those offices to be filled by administration synchopants.

The raw fact is that government, either the Congress or the Executive, will seize as much power as we allow them. The current crises is a creation of the democrat party. Now that they have taken control of two to the three branches of government, they are rapidly on the road to change the nation from a republic to an oligarchy with themselves firmly in control.

We must wrest control from this single party rule, repeal the TARP Act and all subsequent abuses of the Obama administration and enact legislation or Constitutional amendments to prevent future outrages from ever occurring again. Failure to do so will continue our country down the path towards tyranny and civil war.