I saw the title for today’s post in a Facebook comment Saturday.  My immediate thought was Rail-Road #12?  RR12 didn’t connect until another commenter said it meant, Romney-Ryan 2012.

Oh! Yes, I sleep late on Saturdays and I was still fuzzy. So, lump it if I was a bit slow.

The response from ‘Pubs and conservatives was overwhelmingly positive. From the libs…we got the expected screams. Andrea Mitchell of MSNBC said Ryan was, “not a pick for women.” On that same TV show, the host claimed that he was getting emails from progressive womens groups, who noted that Ryan was unacceptable because he was “ardently pro-life.”

Obama campaign manager Jim Messina wrote that Ryan’s “plan also would end Medicare as we know it by turning it into a voucher system, shifting thousands of dollars in health care costs to seniors.” — Washington Examiner.

These responses from the libs and democrats were not unexpected.  It’s their standard operating procedure—demagogue the opposition because the facts supports the ‘Pubs.

On the other, the conservative side, 10,000 people turned out to see and listen to Romney and Ryan in Waukesha, WI, yesterday. 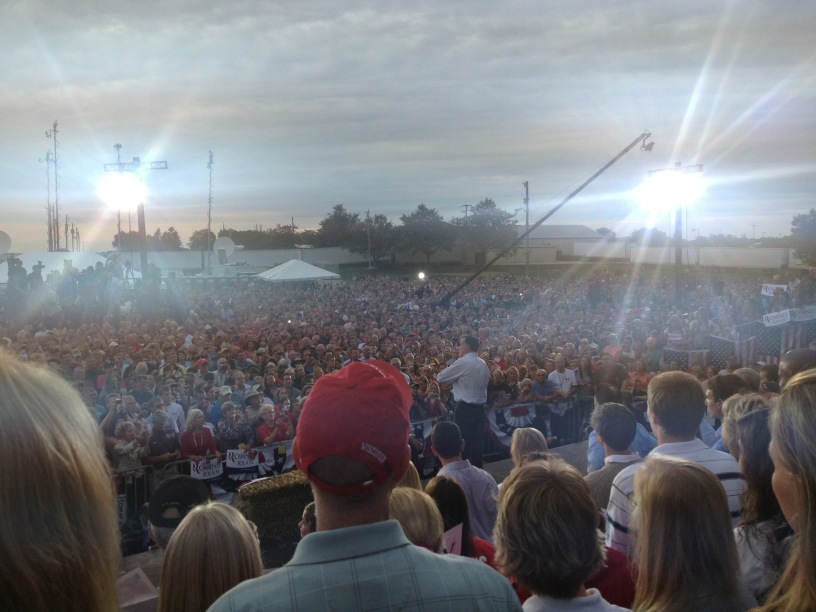 Perhaps the best response to Ryan’s pick came from John Fund writing for the National Review.

Smart Democrats Should Be Worried

Liberal pundits are already fanning out in force to attack and discredit Paul Ryan. Michael Tomasky, who recently wrote a Newsweek cover story calling Mitt Romney a “wimp,” has now decided that Romney’s bold move is “a terrible choice” because Ryan has proven himself to be an extremist on budget issues.

No doubt there are many Democrats rubbing their hands in glee in contemplation of reviving some version of the ad that featured an actor playing Paul Ryan pushing a grandmother in a wheelchair off a cliff. But the smarter ones are worried.

First, if Ryan is an extremist and his proposals are so unpopular, how has he won election seven times in a Democratic district? His lowest share of the vote was 57 percent — in his first race. He routinely wins over two-thirds of the vote. When Obama swept the nation in 2008, he carried Ryan’s district by four points. But at the same time, Ryan won reelection with 65 percent of the vote, meaning that a fifth of Obama voters also voted for him.

Ryan has pointed out to me that no Republican has carried his district for president since Ronald Reagan in 1984. “I have held hundreds of town-hall meetings in my district explaining why we have to take bold reform steps, and I’ve found treating people like adults works,” he told me. “All those ads pushing elderly woman off the cliffs don’t work anymore if you lay out the problem.”

Second, Democrats know that Ryan has Reaganesque qualities that make him appealing to independent, middle-class voters. Take the cover story on Ryan that the Isthmus, a radically left-wing Madison, Wis. newspaper, ran on him in 2009. “Ryan, with his sunny disposition and choirboy looks, projects compassion and forcefully proclaims dedication to his district,” the story reported. “And he’s proved he is not unyieldingly pro-corporate, as when he recently joined in condemnation of AIG ‘retention’ bonuses.”

Third, Ryan’s ideas aren’t that novel or scary. The idea of “premium support” for Medicare, which would change the program’s one-size-fits-all policy to a private-insurance model with public options, was endorsed by a bipartisan commission appointed by Bill Clinton back in the 1990s. Late last year, Ryan announced a new version of his proposal with a new partner signing on: Democratic senator Ron Wyden of Oregon, who first achieved political prominence as an advocate for seniors.

Four, Ryan puts Wisconsin and its ten electoral votes in play. Polls have shown that President Obama holds a five to seven point lead in Wisconsin — significant, but much less than Obama’s 14-point margin in 2008. With Ryan on the ticket, polls show the race is dead even.

Five, if Republicans were looking for a superior candidate, they’ve found it in Ryan. His maiden speech as the GOP vice-presidential candidate was perfectly pitched:

We won’t replace our founding principles . . . we will reapply them!

Echoes of Ronald Reagan at his best.

Ryan was judged to have already had the better of President Obama in televised exchanges on Obamacare. His debate with Joe Biden this October might well be remembered as cruel and unusual punishment for dim vice presidents. Recall that Sarah Palin fought a much more engaged Joe Biden to a draw in their 2008 vice-presidential debate.

Six, as Democratic consultant Joe Trippi acknowledged today on Fox News, Ryan will bring in a flood of donations from overjoyed conservatives and tea-party members. Romney had a problem with energizing the GOP base. That problem is now solved, and that will make it easier to pump up conservative turnout.

Democrats will no doubt try to make Paul Ryan into a younger version of the devil they’ve tried to paint Mitt Romney as. But they should worry about fighting a campaign on fundamental issues in a weak economy. That’s precisely how Jimmy Carter, the last Democratic president to run for reelection during hard times, wound up losing so badly that it not only cost Democrats control of the U.S. Senate but damaging the liberal brand for years afterwards.

Romney, in one swell foop, reassured the conservatives who were concerned about Romney’s “moderateness,” and gained the favor of the Tea Parties who have supported Ryan’s proposals for Medicare and slashing the federal budget.  Bluntly, Romney could have picked someone a lot worse.