I had missed her the previous times she had visited Kansas City. I was not skipping this opportunity.  Sarah Palin and her family, Todd, Willow and Piper, were visiting Friday to stump for Sarah Steelman. The event took place at The Berry Patch outside Cleveland, MO—the largest Blue Berry farm in the state, Friday evening.

We took our friend, Jim W, along. He’s a big Sarah Palin fan. The notice we received said the “gate” would open at 5PM, and the event would start at 6PM with BBQ and music afterward.

We arrived early; a bit before 5PM. There was around a hundred people already there, excluding the vans and setup for two local TV stations, and a large truck from the AFP, the Americans For Prosperity.  Thirty minutes later the crowd had swelled to several hundred more. I would estimate the crowd to be in excess of 500 people at its peak.

The first Sarah Steelman campaign worker we saw was a friend, Jason Smith, a Missouri State Representative from Salem, MO. Jason has visited our church many times and has friends in our area.

We talked with Jason for awhile and with Sarah Steelman who had joined us. After we had talked for a few minutes I noticed a large RV parked near some trees. I don’t remember if it was Jason or Sarah who mentioned, “That’s the Palin RV. Todd drove it down from Iowa. Sarah will be flying in to the Executive Airport (Olathe, KS) and then they will take the RV to Sarah’s next event.” It was a really nice RV! 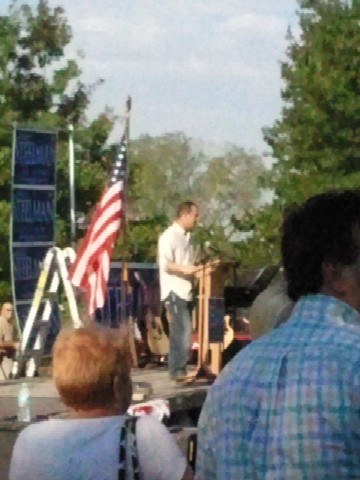 Yes, it’s a poor photo. A smartphone camera doesn’t zoom worth a hoot. At least, it’s my photo. Not one I found on the ‘net.

Sarah Steelman was next. She spoke for fifteen to twenty minutes. Sarah Palin landed around 5:30PM at the closest airport and was being driven to the event site. I don’t know if she had arrived yet when Sarah Steelman started speaking. 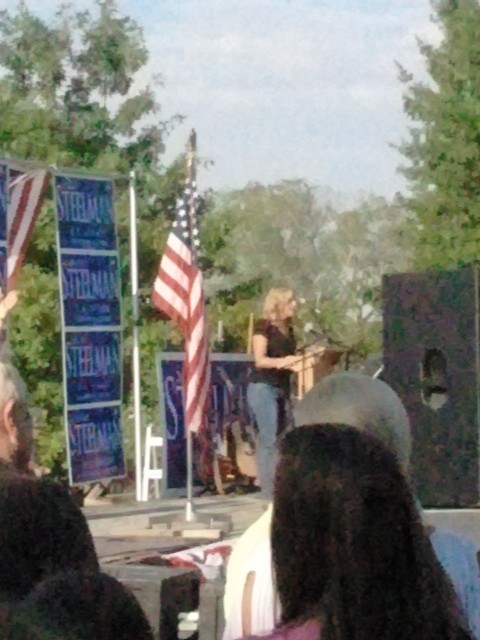 The Finale was Sarah Palin. Her remarks hit the internet, Newsmax and others, before the local TV stations aired her.  I don’t know who fed the audio and photos to Newsmax but they were fast! 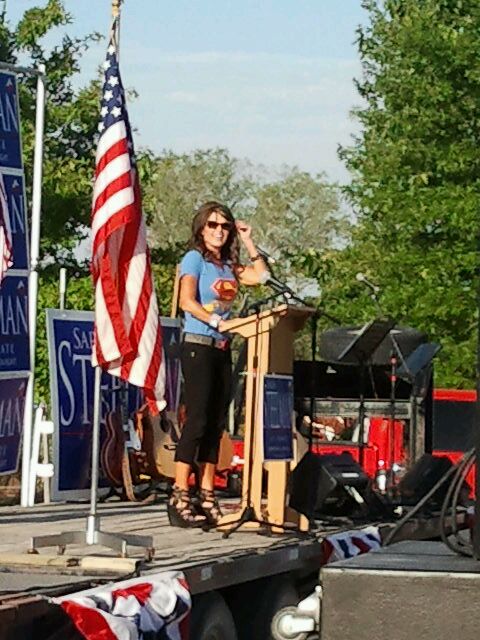 Sarah Palin was wearing a “Super Sarah” t-shirt. I don’t know which Sarah was super—probably both.  The local news people put a lot of emphasis on the t-shirt. They seemed to think it was a big deal.

The BBQ was from KC Masterpiece. The Two Sarahs served the people along with Sarah Palin’s daughters, Willow and Piper. 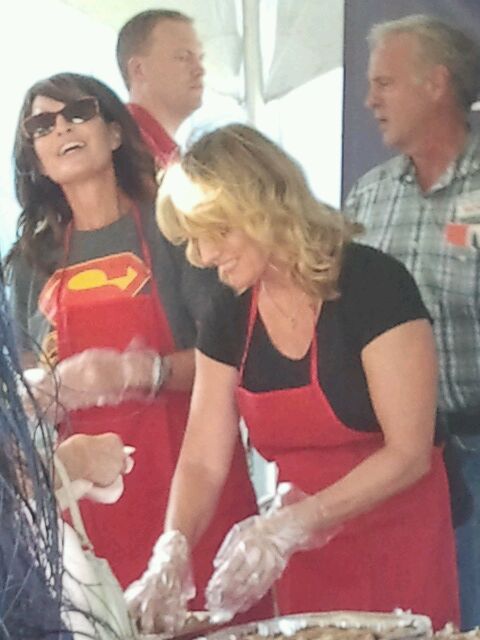 Sarah Steelman and Sarah Palin serving BBQ to the crowd at The Berry Farm, August 3rd, 2012 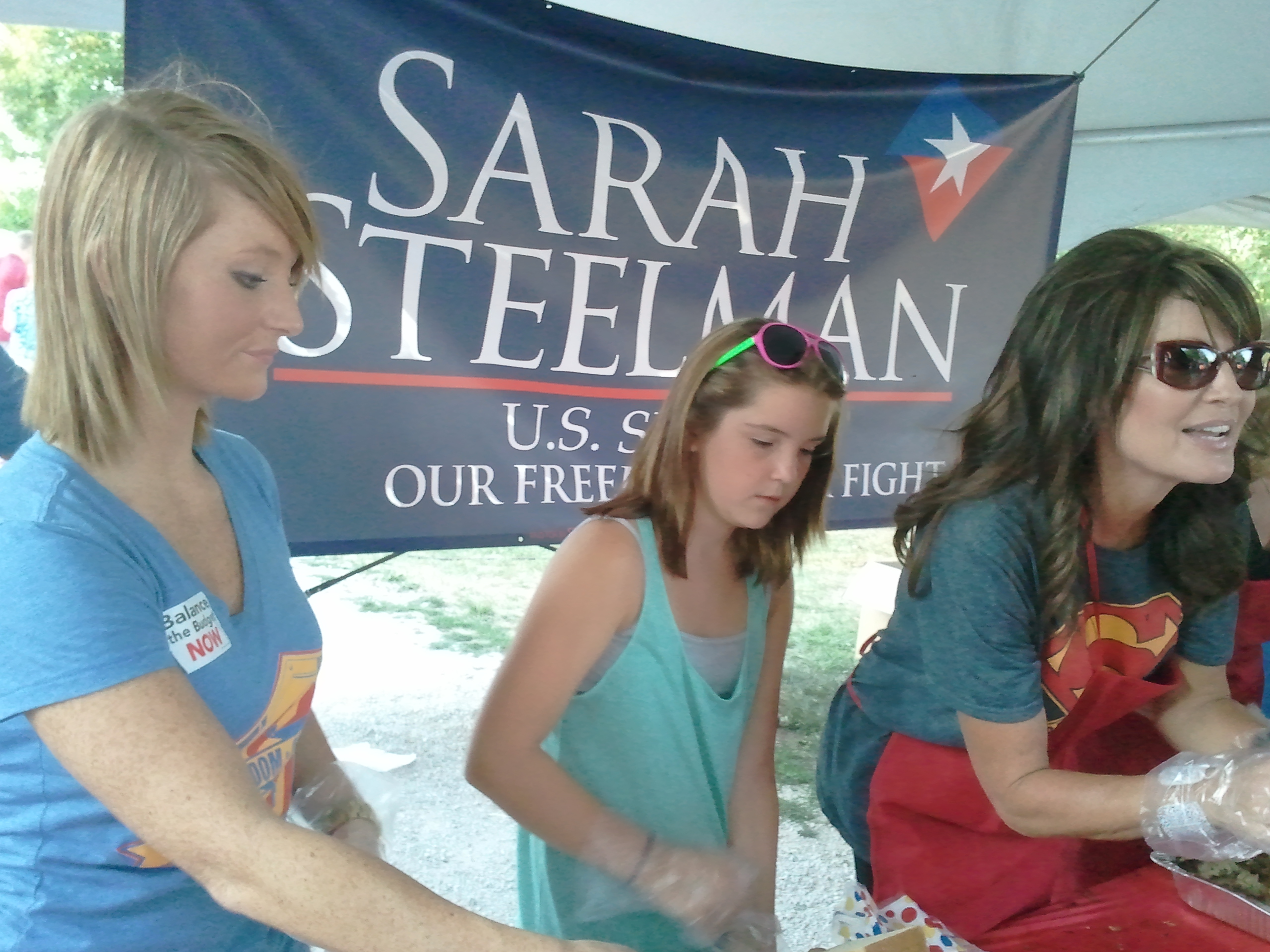 Our friend, Jim W, took a baseball with him and asked for Sarah Palin’s autograph. She called for Todd and both signed it.  The baseball is one Jim caught at a Cardinals game—a foul ball that landed right in his hand.

I saw a number of ‘Pub pols at the event. Many took advantage of the photo opportunity while others just wanted to wheel ‘n deal with the establishment. One, who knows I’m voting for his opponent, snubbed me. I thought it was funny and proved my opinion of him.

It was a great evening. Too bad it takes an election for such events and gatherings to happen.

The election tomorrow will be interesting. The Tea Party has been in the background, working from inside. I wonder if they will surprise the establishment come tomorrow night.