Today’s discussion will be about weapons. Most people who first consider CCW think of this first. Like most endeavors in life, choosing a weapon should not be a, “Ohh! Shiny!” moment.

If you read any of the CCW magazines and websites, you’ll think you need, for CCW, a primary pistol, the biggest caliber you can handle the better, a backup pistol, 2-3 reloads for each, a lock-blade knife, multi-tool, tactical boots, tactical pants and shirt plus a cover garment like a vest. I admit there are some CCW carriers who go to that extreme. The remaining 99.99% do not.

For this article, I will use this definition for handguns:  the term “Pistol” will refer to auto-loading handguns like the Glock, Sig, S&W and others that use a magazine in the butt of the pistol to store cartridges. A “Revolver” is…well a revolver. It has a revolving cylinder containing five to nine cartridges.

One CCW carrier I know, a woman who works in KC and a widow, carries a small .22LR pistol. The pistol is scarcely larger than the palm of her hand. She’s comfortable with it, and practices with it. From sunup to sundown, that .22 is always on her person or within reach.

I know another woman CCW carrier who carries, on occasion, a Sig P220, a .45acp pistol on her waist in an OWB holster. The physical size of your chosen weapon is what you are comfortable carrying.

Some men like to carry a full-size 1911. Others will carry a .32 or .380 slightly larger than the Bobcat above. There is no rule that says men carry large pistols, women small ones.  Carry the size of pistol that is comfortable for you. When you need to defend your life, a .22lr is better than no weapon at all.

A revolver can be a good choice.  They’ve been around since before the Civil War. They are sturdy, well designed and have few problems, like Failure to Feed, or Failure to Eject, that can occur with pistols. On the whole, if you concern is reliability, will it go Bang! when you pull the trigger, then a revolver should be at the top of your list.

A revolver can be large or small. Small ones, like this small .38Spl by Smith&Wesson, can be easily carried in a pocket or purse. 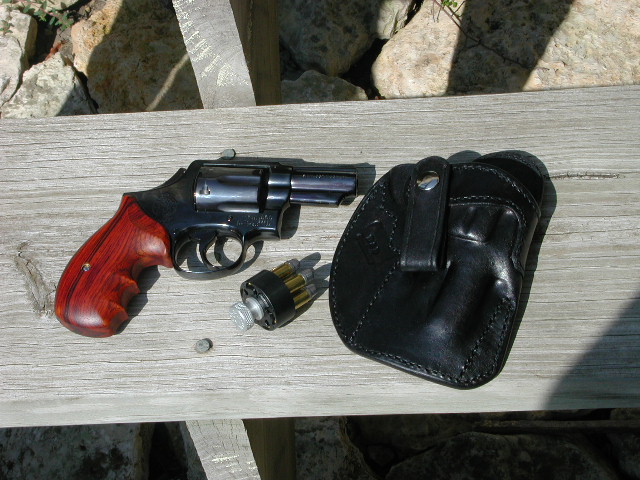 It is not unusual for an old revolver to be laying around the house…a leftover from prior generations or an inheritance. These, too, can be a suitable choice for a defensive weapon. I would suggest you have the revolver checked by a competent gunsmith. While there are few moving parts in a revolver, wear can cause some problems that would make the revolver unsafe to shoot.  Ammunition can be an issue too.  There were millions of revolvers sold in the .38S&W caliber. That cartridge is NOT the .38Spl cartridge common today.  The .38S&W shorter than the .38Spl and is harder to find. On the other hand, I have seen some on the shelf at Cabelas.

Now to pistols. There are many choices available for CCW. All, from reputable manufacturers, are good choices. There are some, like Jennings and the like, that are made of pot-metal. Many of these cheap pistols have been found to be unsafe.  If you limit your search to the reputable brands, like Ruger, S&W, SIG, Glock, Beretta, Colt, Kahr and many others, you should have no problems finding a pistol that fits uou and is safe.

Some shooters have a problem with pistols. Revolvers operate by muscle power. The strength of the trigger finger is used to move the cylinder and cock the hammer. When the cylinder (with a fresh cartridge) is aligned with the barrel and the hammer is fully cocked and released, the revolver will fire.

The pistol is different. The principal of operation for a pistol is inertia and momentum. Initially, the pistol’s slide is retracted. When released, it strips a cartridge off the magazine and chambers it.  A “Failure to Feed” is a condition when the cartridge is not fully chambered. It sits cocked in the chamber and causes a jam.

When the cartridge is fired, the recoil causes the slide to retract. While the slide is moving backwards, the empty cartridge, the brass, is extracted from the chamber and ejected. If, for some reason the cartridge is not fully extracted and/or not ejected, the condition is called a “Failure to Extract”. This, too, will cause a jam.

I said that pistols operate by inertia. There is a shooting (or really a shooter-caused) condition known as “limp-wristing” that can cause either or both of the failure conditions above. A pistol requires a solid grip to operate. A loose grip, allowing the pistol to move excessively when fired, reduces the momentum of the slide that is required for the pistol to extract the fired cartridge.

I’ve been appalled watching gun handling on TV. A common stance is to hold the pistol at eye level (correctly) with both elbows bent (incorrectly) and the pistol position about a foot to a foot and a half in front of the face.  Unless the shooter has very strong arms, this position will, sooner or later, cause a jam, most likely a failure to eject. Why? Because the cocked elbow stance allows too much movement of the pistol robbing the slide of the momentum it requires to fully move to the rear, eject the cartridge and strip a replacement off the magazine. Limp-wristing is an object lesson in physics.

The down side of pistols is that some women don’t have the strength to handle a pistol in the larger, 9mm and up, calibers.  In older women, my wife for example, some don’t have the grip strength to fully retract the slide for the initial chambering of a cartridge.

For this reason, I strongly suggest women try out several different weapons, pistols and revolvers, before making a choice for a personal weapon.  What is suitable for one may not be suitable for another. If you visit a gun store and the clerk directs you to some “lady’s” pistols or pink ones, leave. That clerk is ignorant about shooting and gun handling.

Instead, visit a shooting range that has a variety of rental weapons available, or ask a friend who has a variety of handguns to take you to the range to allow you to sample a number of different handguns.  It is permissible for you to buy or replace any ammo expended during that range trip.

I would also suggest you attend one of a number of NRA training sessions on safety and gun handling. You can acquire more knowledge and practice that will help you choose your personal weapon.

This is the last of four articles concerning CCW for the new or non-shooter. I am not an “expert” nor do I pretend to be one. I hope these articles have provided some answers to questions and discussed issues that will help you if you decide to continue towards a CCW permit. If you have any questions, you can send me an e-mail. My address is available here on this website.