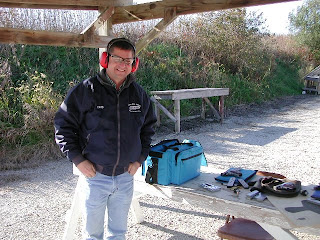 I took a friend, David, out to the range Sunday afternoon. It was sunny and windy with temperatures in the low 50’s. David had been asking questions about acquiring a CCW permit. He’d been increasingly concerned and was joining the NRA to show support for the Second Amendment.

David grew up with guns, had been a hunter, but had not much experience with handguns. My intent with this session was to give him a basic familiarization with revolvers and pistols, give him the basic firearm gunhandling safety primer and to shoot a basic course.

He met me at my house and we drove out to the range. Along the way, I gave him a printout of Cooper’s Four Rules and went over each one. We also discussed the prerequisites for applying for a CCW, training and a overview of some of the training topics.

We set up the targets and I lead with 8-rounds out of the Kimber at 10 yards. I hadn’t shot the Kimber in some time and I was pleased that I was able to create a nice grouping. I’m not too accurate with handguns. I wear bifocals and arms length is right a the demark between the two lenses. The result is that my front sight is always fuzzy.

It was David’s turn. I drew out the sight picture he should make, told him how to grip the Kimber, to grip it tightly and just move his trigger finger slowly. David’s first shot was dead center. I made sure we had a photographic record to give David some bragging rights. 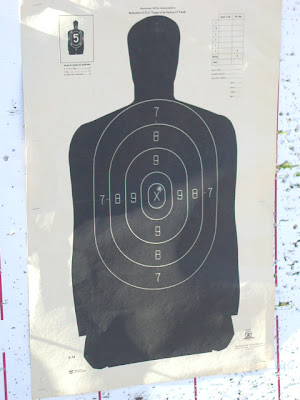 We fired all our ammo, cleaned up the range and left just before dusk. David had a great time, I found a new shooting partner and we both had a great time together. David will be joining the ranks of the “Gunnies” soon. He’s reviewing his options on a pistol. I think he’ll pick up a revolver for his first handgun.

It was a great Sunday afternoon.