Today’s post will review three speakers who appeared before the NRA in St. Louis, Mitt Romney, Rick Santorum, and Newt Gingrich.
However…I have an appointment this morning and will postpone the rest of this post until later today.  In the meantime, here’s Mrs. Crucis with the NRA Executive VP, Wayne LaPierre. 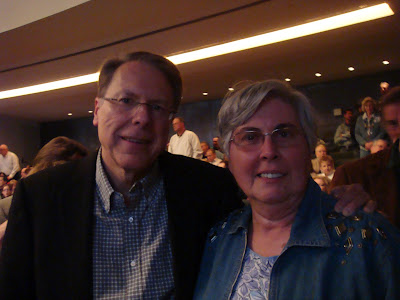 We were at the NRA Country Jam waiting for Trace Adkins when Wayne LaPierre appeared and started walking through the audience, greeting them and sharing handshakes.  We were sitting are the end of the aisle when LaPierre approached speaking to folks in each row.  When he reached us, I took this opportunity to get a photo.  LaPierre certainly knows how to work a crowd.

I’ll add more to this post after I return.

The Leadership forum was scheduled for Friday afternoon, April13, 2012.  Chris Cox opened the forum and it continued into the evening.  Mrs. Crucis and I stayed until 5:00pm when we left to get something to eat and attend Trace Adkin’s Country Jam at 6:00pm.

Wayne LaPierre followed Cox speaking about the need to defeat Obama in the Fall.  The NRA’s slogan this year is “All In!“, signifying that the NRA is going all out to defeat Obama and the democrats.

At the beginning, Romney took a shot at Hiliary Rosen by bringing his wife, Ann, to the podium.  He described her as a working Mom, a cancer survivor, mother of five and living with MS.  Having her speak probably saved his appearance.  I watched the audience and there was little reaction except when Ann Romney spoke.  I impression is that Romney was not damaged by speaking but I don’t think he gained much support either.

For full disclosure, I am not a Romney fan. My preferred candidate is Newt Gingrich, but I’m also realistic enough to realize that Newt’s chances of winning the nomination is almost non-existent. If Romney is the party’s nominee, I’ll vote for him, but I also think the party could do much, much better.

It was interesting that neither Gingrich, who followed Romney, nor Santorum, who followed Gingrich, mentioned Romney nor implied giving any support.  All the other GOP politicians to a man endorsed Romney.

Mrs. Crucis and I were seated in the media section to the left of the stage.  In front of us were “journalists” from the LA Times, WaPo, and to Mrs. Crucis’ left was MSNBC including Michael Isikoff.

Most of the State Media folks paid little attention to those speaking.  They had copies of the speeches and they weren’t interested in listening nor in observing the audience. The “reporter” from the Washington Post, grabbed a camera to take a photo as each speaker reached the podium. After that she left, disappeared, until the next speaker appeared.

Michael Isikoff, of Lewinski fame (he sat on the Lewinski scandal until scooped by Drudge,) sat two chairs to the left from Mrs. Crucis.  My wife clapped enthusiastically for each speaker.  This seemed to irritate Isikoff.  I hope to persuade Mrs. Crucis to write about that in another post.

The issue here was that the state media weren’t interested in really reporting the speakers.  They were marking time.  From the conversations I overheard from them, they were more interested in meeting after the forum at a nearby casino.

Newt Gingrich was next in the lineup after Romney.

Of them all, Newt was the most…eloquent speaker.  If you listen closely, you’ll hear numerous standing ovations—a reaction that Romney did not receive and Santorum only received towards the end of his speech.  Regardless of all his baggage, Newt knows how to present a plan. He spoke about how to achieve is $2.50/gallon goal for gas, require training/retraining to provide current/renew skills to qualify for unemployment compensation, remove all of Obama’s Czars, support Israel by moving the US Embassy from Tel Aviv to Jerusalem and opening off-shore drilling in ANWR and on federal lands. When Newt spoke of working to extend the Right to Keep and Bear Arms to the entire planet, the audience roared.

Rick Santorum was next.  He started a bit cold.  As he spoke, he gained in momentum, gaining passion.

My impression was the Santorum wanted to be elsewhere.  I assume he was worried about the health of his daughter, Bella. He mentioned her a number of times. I can understand that.  He has withdrawn from the Presidential race but has not, yet, released his delegates.  He alluded to something coming in the next few weeks.

All three candidates claimed to be NRA Life Members.  Santorum said he and his wife were both Life Members and now so was their daughter, Bella.

Mrs. Crucis and I are glad we attended the convention this year.  We hadn’t attended one since the NRA held their Annual Meeting in Kansas City some years ago.