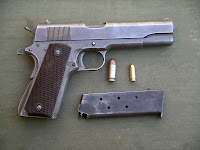 I missed celebrating the 100th anniversary of John Browning’s venerable M1911 pistol. To make up for that oversight, here’s my contribution in the celebration.

Though never confirmed, many believe Lt. Baggett took down a plane with his M1911A1.

In the hands of American soldiers and marines, the M1911A1 performed admirably throughout World War II. In fact, there are numerous accounts of the 1911 being used in courageous acts earning the bearer the Medal of Honor.
There are also legends about the power, accuracy and reliability of Browning’s masterpiece, which may, or may not, be true, but speak to the magnificence of a pistol design that is more than 100 years old. One of these stories took place March 31, 1943, near Pyinmana, Myanma, and was first reported July 1996 in “Air Force Magazine.”
On that fated day, the 7th BG’s 9th Bomb Squadron was sent on a mission to destroy a railroad bridge, but was attacked before it could reach its target. The bombing group took heavy fire from Japanese fighter planes, wounding the squadron’s commander, Col. Conrad F. Necrason, and disabling numerous B-24 Bombers, including one carrying Lt. Owen J. Baggett.
Though the crew continued to fight, it was obvious that the plane was going to crash, so Baggett’s pilot, Lt. Lloyd Jensen, ordered the men to bail out. Along with the other members of his unit, Baggett jumped from the plane and pulled his parachute.
The Japanese pilots fired on the floating crew killing some and wounding Lt. Baggett in the arm. The story goes that when the pilot who fired upon Baggett came around for a look, the young lieutenant hung limply in his harness as if dead. The ruse worked because the fighter raised his canopy as he flew within feet of the parachute giving Baggett an opportunity. As the plane soared by, Baggett raised his M1911A1 .45 and fired four rounds at the plane, which banked before stalling and crashing into the ground.
After landing on the ground, Lt. Baggett, along with three other crew members, was captured and taken to a POW camp near Singapore. Baggett didn’t really believe that he had taken down a fighter plane with only a handgun, but Col. Harry Melton, commander of the 311th Fighter Group, ended up at the same camp telling a story about a Japanese colonel that had said that the pilot Baggett had fired upon had been thrown clear of the plane and had been found dead of a single bullet to the head.
While there is no direct evidence that Lt. Owen Baggett did in fact take down a Japanese fighter plane with a handgun, many believe it to be true. Regardless, this is a great story of a courageous man involving a legendary pistol.
After the end of World War II, Owen Baggett remained in the military eventually rising to the rank of colonel in the U.S. Air Force, which was his rank when he retired to San Antonio, Texas. In 2006, at 85 years old, Owen Baggett died in Texas, but he will always be remembered as the man who used a .45 to get a Zero.