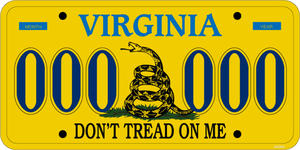 It’s sad that Missouri is behind the curve on this. Virginia is leading but it should not be the sole state taking this opportunity. I advocate that the State of Missouri add this option for Missouri License plates starting in 2011. It they want to charge “vanity” plate rates, that’s OK with me.


Missouri needs to be a leader in this effort across the country. Don’t Tread on Us!

By: David Sherfinski 11/22/10 9:05 PM
Staff Writer
From Virginia’s lawsuit over health-care reforms to a bill that would create “Don’t Tread on Me” license plates, a growing movement is percolating among the Old Dominion’s top GOP officials and the conservative rank-and-file to push back against federal authority over an array of issues.
The state’s top three elected officials, for example, have voiced support for an amendment to the U.S. Constitution that would allow a decision by two-thirds of state legislatures to override federal law.

The movement for the so-called “Repeal Amendment” could gather momentum next year, as state legislatures that shifted from blue to red after the November elections begin their deliberations. Republicans have added more than 675 seats in state legislatures during this election cycle and have flipped chambers from Democratic to Republican control in at least 13 states, according to the National Conference of State Legislatures.

That movement is only one expression of anti-federal sentiment in Virginia.
Del. John O’Bannon, R-Henrico, filed a bill at the request of his constituents that would create a “Don’t Tread on Me” license plate.

Update: I sent an e-mail to my local state representative with a link to the above article. I urged him to get with other conservative state legislators and do the same for Missouri. I’d have to trade-in my current vanity plate but it’d be worth it.