I was talking with my 90 year-old father the other day about government and politics and free enterprise and entrepreneurship…and how it worked in our family. His father, from southeast Kansas, started out in the Kansas National Guard sent south to capture Pancho Villa. Then he ended up on a ship with mules headed for France with the American Expeditionary Forces where he helped lay phone lines by horse cart from the front trenches to the rear command positions. He participated in the battles of St. Mihiel and the Meuse-Argonne. I recall him singing a cleaned-up and abbreviated version of Mademoiselle from Armentieres but until much later in his life he didn’t talk about it too much. When he came home from the war he married and took a job in Kansas City working for an outfit that repaired and manufactured electrical systems for automobiles. After a couple years he decided to start a business with a coworker. They were a jobber for auto electric parts and did rebuilding of generators, starters, magnetos, distributors and windshield wipers. That wasn’t a bad business to be in during the depression and they did well enough that in the late 1930s they could buy a nice farm north of Lee’s Summit, build a house and outbuildings, raise Herefords and Suffolks along with some chickens….all the while commuting into Kansas City to the business. When the county decided they wanted to have the farm for Lake Jacomo, they ended up in Leawood for retirement–not at all the retirement they had planned on at the farm! 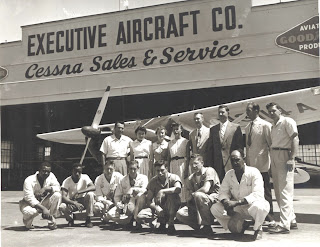 My father came home from World War II to a wife and a daughter born while he was flying long round-trips from Saipan to Japan. He worked for a Kansas City company for a while and then joined with a couple other fellows to start an airplane sales business at the Kansas City Airport. He eventually struck out on his own to be a manufacturers’ rep for electronics companies. That wasn’t nearly as interesting to me as spending time at the airport, but it paid for summer camp, college and all sorts of other benefits. That change also threw me into the population of kids who really had no idea what their fathers did for a living. Those airplanes were way more exciting than transistors!

Both my father and granddfather had the gumption to make their own way in the world relying on their wits and talents and they created good lives for their families.

I gave entrepreneurship a try for a number of years in the book business just about the time the big chain stores came to the neighborhood. It was an adventure to run a business but I never had the full experience of the do-or-die, support-the-family-or-else variety that my grandfather and father did.

When we talked the other night we were wondering what sorts of gyrations one would need to go through in order to start a business….even a simple one. There would be all sorts of licenses, permits, forms, more licenses, etc., just to open the door. Then, if there were employees there would be all the various government entities involved for disability, withholding taxes, and insurance and so on. It’s almost as if the various governments inserting themselves would just as soon you didn’t bother.

I came across a video today on one of my favorite blogs, Maggie’s Farm, put out by the Institute for Justice, a libertarian public interest law firm that takes on cases involving Economic Liberty, Private Property Rights, School Choice, First Amendment and others. They include a number of videos on their website including one I’d seen before about a monastery in Louisiana that makes wood coffins (and dandy-looking coffins they are, too!) but the funeral industry in that state got themselves a law saying no coffins could be sold by anyone other than a funeral business. So–the monks are fighting back for their livelihood. Good on them!

I found this brief and entertaining video (entitled ‘Why Can’t Chuck Get His Business Off the Ground?’) shocking as I had not realized it was this difficult to start a business in many cities and states. It’s actually worse than I had thought. The IJ folks even went to the trouble to annotate all the rules/laws in each instance. These are the sorts of onerous regulations that our newly elected politicians–nationally and locally–need to eliminate or severly modify so that the great engine of entrepreneurship and free enterprise can power us out of the mire we seem to be in right now.

So while we can be happy this week for the general way the elections turned out, we need to continue to encourage our politicians–locally, state-wide and nationally–to do a much better job to allow those with ideas, energy, gumption, and a strong sense of adventure to start and grow businesses. With rules such as are in place now, it’s hardly a wonder why taking your business to another country might seem attractive.