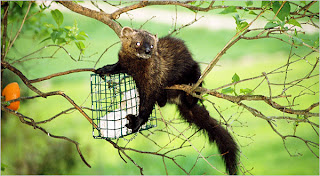 Living in the country gave Dad an opportunity to indulge in one of his pleasures—‘coon and fox hunting. Dad raised dogs as a sideline to farming and working the mines and was famous locally for his field trial dogs and awards. Over the years he raised various hounds, Blue Ticks, Foxhounds, Beagles and Bassets. We always had dogs and during the summer, night-running, that is hunting raccoons and foxes was a prime sport.

A night-run would usually start with one of our neighbors stopping by in the late afternoon, or Dad stopping off at some neighbors on the way home from the mines and making “arrangements.” About 8 o’clock in the evening, Dad and I would gather up the dogs in the back of his government surplus GMC pickup and we’d head off to Miller’s bridge in the Big Muddy River bottoms. By 9 o’clock, there would be a half dozen to a dozen pickups and cars parked along the road on both sides of the bridge. Whoever arrived first would start a fire and put on a bucket of water for coffee. Others brought their refreshment in crockery jugs and mason jars.

After the dogs were let loose, we’d stand around sipping coffee, sodas for me and the other boys. A few of the men passed around jugs and mason jars. Soon the men would tell stories about local democrat politics, union politics, or long-gone gansters like Charlie Birger, whom Dad saw hung in 1929. Amid all the talk, everyone kept an ear out listening to the running dogs. When the dogs found a trail, their barks changed. We would listen and speculate on the location of the dog pack. Often the dogs would chase a fox or ‘coon in a circle around the trucks and back and forth across the river. On occasion, the dogs would chase a deer and not return home until late the next day. More often, their barks would change to howls and we’d know they had something treed. When that happened, off we’d go with lanterns held high and a pistol and rifle or two.

This night, the dogs got on the trail of something different. From time to time we’d hear a high-pitched squalling, almost a scream. Whatever made the sound would stop and let the dogs catch up and we’d hear dogs barking, howling, and the unknown something screaming. The fight would last a few minutes and then the chase would take off once again. We followed the dogs about two miles into the brush, briars and trees of the bottoms when we heard the dogs barking “Treed!”

The tree was a large oak on a small rise in the middle of a slough. We held the lanterns up (mostly kerosene, white-gas Coleman lanterns were too expensive) and shine some flashlights into the trees to see what had been caught.

It wasn’t a ‘coon or ‘possum. It was long, almost slinky, dark furred and much larger than a ‘coon. The animal would let loose a loud squalling scream that made some of the men think we’d treed a “panther.” While we were speculating on the nature of the beast, it dropped from the tree into the middle of the pack of dogs and the fight was on!

Dogs barked, growled and howled, the animal squalled and screamed, men shouted and hollered. A few wanted to shoot the animal, but no one dared because the dogs were too close. In a few minutes, the dogs started running off in all directions. It wasn’t long before we noticed the dogs were all gone and in the dark we could hear the animal hissing, circling us just outside the light of the lanterns. Once or twice, someone caught the animal in the light of a flashlight and took a shot. I don’t think anyone ever came close to hitting it.

Dad and I finally got home about five in the morning. Mom was fit to be tied and Grandma had just got up to begin breakfast. Dad said he didn’t know what we’d found. Grandma called it a “Haint.” She said she had heard them from time to time all her life out in the river bottoms.

Years later when I was in college, I passed through the University museum, a short-cut between buidings, and saw the animal, mounted on display. The sign called it a Fisher. The mounted animal was quite small, the size of a large housecat. The one Dad and I saw was much larger, as large as a large dog, large enough to fight a dozen dogs and win. I’ve never seen one since, but I still remember it’s scream.