My wife, blog partner Dinah and I had an outing Saturday.  We hadn’t been out together for almost a year.  The last time we went out to dinner at a local Italian restaurant.  This time Dinah wanted to smell burnt gun power.

We picked Dinah up, loaded the Tahoe and arrived at the Pioneer Gun Club’s outdoor McBride range about 2PM.  There were a few folks at the short rifle range and a CCW class was just finishing the shooting portion of their course at one of the pistol bays.  We drove down to the pistol bays and ended up sharing one with another member who was teaching a teenager how to shoot.

Between the three of us we had close to a dozen firearms.  Mrs. Crucis and I took two .38s, a .357 and two .45s, a .22 rifle.  Dinah brought her carry pistol, a 9mm, a .22 revolver and some .38s—one a snubbie with Crimson Trace laser grips and her .22 rifle.  We shot all the pistols but didn’t get around to shooting any of the rifles.  Next time we concentrate on them.

We selected an old cable spool as a range table, set up some targets and spent two hours shooting our pistol collections.

In the photo above is my 2 1/2″ S&W M13 and my Colt Commander.  We used the binoculars to check the targets. We were sharing the bay and had to stay behind the shooting line until we could jointly declare a cold range and go forward. 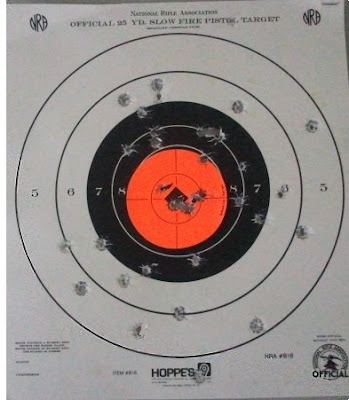 We shot at 15yds—the shooting line established by the other shooters in the bay.  I started with my .38 snubbie and didn’t do all that great. At least I was able to keep my rounds on paper (although I did score a direct hit on the bottom staple. Thereafter, the target had a tendency to fly up when hit by a gust of wind.)

I know I’m getting older and that reflected on my shooting. The black sights of my snubbie and later the fixed sights of my M13 just blended into the black inner rings of the target.  I wasn’t much better when I switched to the Colt Commander.  The Commander has the standard Colt small military-style sights.

After an embarrassing number of rounds, Dinah found some orange target pasters. The pasters gave us a bit of contrast between the target and the pistol sights. Finally I was able to put some .45 rounds in the 10-ring.

After shooting paper for a couple of hours, we moved to the next bay that was set up for falling steel plates.  The lack of color contrast was an issue again.  I continued with my Commander. The sights once again blended into the grey steel of the plates.  I had one good run knocking down all six plates with a round left over in the magazine.  Thereafter I got tired and just couldn’t maintain a good sight picture.

Keeping a good sight picture is difficult when you can’t focus on the front sight.  I probably would shoot better with trifocals or shooting glasses that would allow be to focus at full arms length.

At the end of the day, I discovered the Commander had given me hammer bite and the pounding recoil all afternoon had caused the  web in my hand to swell.

The hammer bite wasn’t as bad as I have received in the past.  I had two cuts that oozed a little and the powder residue stung a bit.  The photo above was taken after I had washed my hands and cleaned the cuts with hydrogen peroxide.

At the end of the day, we migrated to the clubhouse and had some celebratory Ice Cream drumsticks—our tradition.

Contrary to some of the photos above that I’d taken earlier in the week, Saturday was overcast, dark and spitting some occasional rain.  We were dry during the afternoon but the dark clouds threatened to open at any moment.  We left the range a little after 5pm and headed home.

All in all, it was a great afternoon.