I had a full day yesterday doing errands and working on the computer of a church member.  Consequently, I overslept this morning.  I have more errands today and don’t have time to do my usual research for a daily post.
So, I’ll punt.

It’s Cartoons of the Week time! If you understand the message below, you may not recognize the character.  This is for you who are old enough to remember the Dobie Gillis Show. 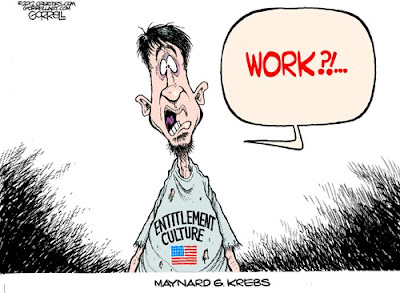 Yes, work.  Nothing in life, contrary to Obama, democrats and socialists, is free. Everything has a cost and sooner or later, the bills come due.  For America’s welfare state, that time is coming soon.

The left continues to attack Rush Limbaugh while ignoring the obscene statements from Bill Maher, Keith Olbmerman, Jon Stewart, Dave Letterman and a host of other liberals.  They have called conservative women much, much worse even to the extent of advocating rape of Sarah Palin’s daughter.  But have one conservative describe a liberal political activist by her proper name and the flood gates open.

The liberals are trying to get Limbaugh kicked off the air.  At the same time, they have accepted a million dollar donation from Bill Maher to Obama’s PAC and refuse to send it back.  Pure hypocrisy. It’s what we should expect from the left.


Michael Ramirez’ opinion on the matter is next. 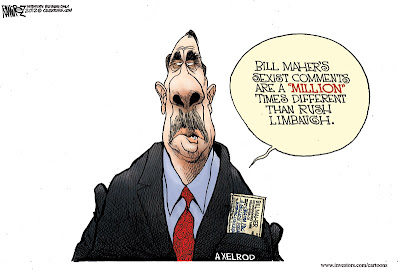 You all have a great weekend, hear? The NRA Annual Meeting is less than a month away.